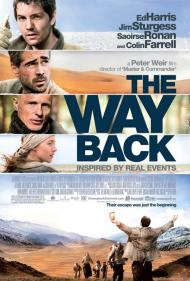 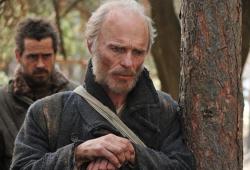 Colin Farrell and Ed Harris on their way back.

Peter Weir (Dead Poets Society, The Truman Show) directed this story based on the memoirs of Slavomir Rawicz. He and two fellow prisoners escaped from a Siberian gulag in 1940 and eventually walked 4,000 miles to freedom in India. In the movie a group of five political prisoners from the recently invaded Poland escape along with an old-timer American (Ed Harris) generically called Mr. Smith, and a Russian criminal played with relish by Colin Farrell.

At the beginning of the movie we are told that only three men make it to the end of the journey. The question of who will and who will not survive begins immediately after their escape during a blinding blizzard. The men face the most extreme climate conditions imaginable and literally thousands of miles of rugged unforgiving terrain.

Along the way they encounter a young girl. At first they are reluctant to let her join their group but she eventually wins them over and in her own way brings them closer together. As their incredible journey goes on and on they grow nearer to starvation, dehydration and sunstroke with each passing day. The toll the elements take shows clearly on their faces. The make-up artists convincingly created red, chapped and blistered skin and garnered the movie its one and only Oscar nomination.

National Geographic Films was one of the production companies for The Way Back. It was shot in Bulgaria, Morocco and India and the panoramic cinematography is quite breathtaking. You definitely get a feel for the vast distances being traversed as well as an idea of just how indestructible the human will to survive can be.

The acting is first rate and the script throws in enough details to make these characters seem like fully fleshed out human beings. An occasional laugh is even produced, usually at the outlandishness of the situation and how slight the odds are that any of them will get back alive; humor as a means of maintaining one’s sanity.

My only complaint about The Way Back is the pacing. The story takes too long to get going and it plods along at the same methodical pace throughout. We already know they escape, so the movie should have begun with that and we could have been introduced to the men on the way. Trimming 15 to 20 minutes off the run time would make a big difference.  Despite the slow path it takes The Way Back is still worth following. 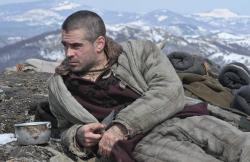 Colin Farrell in The Way Back.

As this movie progressed I found myself wondering which parts of it were added for the movie and which parts were real.  I assumed the American character played by Ed Harris was added, in the same way that Steve McQueen was added to The Great Escape in order for the movie to appeal more to American audiences.  I also assumed that Irena was put in the movie to try and add some female appeal.

Some quick Internet research later and I discovered that it turns out, according to a BBC Documentary backed up by documentation, that everything in the movie was made up as Slavomir Rawicz, the author of the book, and the person the main character in the film was based on, was actually released by the Russians in 1942 and he never escaped in the first place. This doesn't really hurt the movie dramatically, but I might have viewed it differently had I known it wasn't true at all.

Like you Patrick, I found the biggest problem with the movie to be its pacing.  It runs a hefty 2 hours and 12 minutes and feels even longer. By the end of it you'll feel like you walked with them from Siberia to India. Part of the probelm with this is that the most exciting parts are at the beginning of the story.  Once they escape from Russia, there's never any tension, just slow plod.

It also doesn't help that Colin Farrell's character never leaves Russia with them.  He is certainly the most colorful and entertaining character and once he's gone, he leaves a huge gap that's never refilled. He and Ed Harris are the two brightest parts of the film, with the most personality.

Visually the movie is stunning with vista after vista of beauty spread out on the screen.  There's so much of it and it moves so slowly that at times it feels more like a travelogue than a movie.  And certainly the makeup is deserving of awards as these guys and lone girl are battered by the elements, with their hardships written all over their faces and bodies.

Despite the fact that contrary to its claims, the plot is probably fictional, I do agree with you Patrick that it's a journey worth taking, but it's not one I'll ever want to go on again. 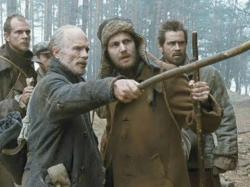 My son and I were a bit disappointed to discover, via Scott's reviews, that this is not a true story.  It opens as if it were.  A movie with a similar  plot line, As Far as My Feet Will Carry Me (2001) is based on a true story. It is about a German soldier who escaped from a Siberian prison camp, and walked thousands of miles to freedom.  The Way Back may not be a true story but is is not an entirely unrealistic quest.

Some things in the movie though, are unrealistic.  In one scene, one of the prisoners asks Farrell to remove his shirt as he is going to shave his face.  Farrell's beard is several weeks old, yet he does not even have a hint of chest hair stubble.  For a film noted for it's makeup, it is a obvious mistake.  Another thing I found convenient was that everyone of the prisoners seem to be able to speak several languages.  Farrell's and Ronan's Irish accents slip several times.   Listen to Ronan say,  "It looks like a birds nest."

I disagree with Patrick.  These characters never seem like fully fleshed out human beings.  We occasionally get little bits of information on these folks but we never really see any personalities.  Farrell, as Valka, is the most unique one of the bunch.  He is a violent, communist criminal, who only looks out for himself.  Every other character can simply be described as nice.  They may have different backgrounds, but as they traveled they were interchangeable.

I agree with Scott about the length.  Several times I assumed, and hoped, it was over only to discover they had another barren waste land to cross.  If the movie accomplishes anything it is that the audience suffers along with the characters.  The Way Back is far too long of a journey, and watch, for far too little reward.