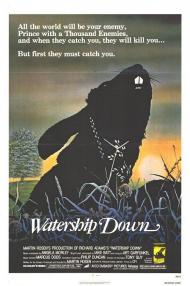 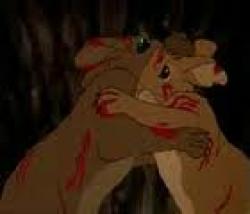 Watership Down is a classic film for threemoviebuffs.  We saw it many times when we were kids. It lead us to read the novel by Richard Adams.  I still have the hardcover Scott bought me years ago.  Watching it now for the first time in decades I realize even more just how well written it is.

The story is about two rabbits, Hazel and Fiver, who is psychic.  One day Fiver gets a "feeling" that something bad is going to happen to the warren they share with many other rabbits.  They approach the rabbit chief and tell him of his premonition.  He ignores them.  They decide to leave with some others that believe them.

This starts a journey through some English country side.  They have to contend with predatory animals.  A highly suspicious warren with very odd acting rabbits.  A farm with a cat and a dog.  Eventually they are met by a rabbit from their original warren named Captain Holly, who tells them that Fiver's feeling was correct.  He also tells them of a totalitarian warren that he came across and barely escaped from.

They finally come across a hill with a single tree on top, Watership Down.  There they find peace and tranquility until they realize they need mates.  The barn they came across had caged does and the warren Holly ran into has many females as well.  With the help of a wayward seagull, they make a plan to free as many rabbits as they can to join them.

The final portion of the film is a very tense action piece that features the rescue, get away, and eventual assault on Watership Down.  I have seen nearly every animated movie to ever be released in The United States and none have ever built to such a dramatic and tense finale.  These are rabbits, but they fight each other bloody.

We watched this movie so often that I was still able to quote many lines as the cast said them.  "The field, it's covered with blood!"  "Can you run? I think not."  "There's a dog loose in the woods!"  "You stupid bunnies! You have no mates!"  As a kid, the adventure story and Kehaar as comic relief kept my interest.

The rabbits faith in their God Frith was always fascinating.  Watching it as an adult is even more fascinating.  How many cartoons have characters praying? "My heart has joined the Thousand, for my friend stopped running today."  Some moments are truly moving.  When Hazel is desperately racing to execute a plan to save all the other rabbits he prays to Frith, "Lord Frith, I know you've looked after us well, and it's wrong to ask even more of you. But my people are in terrible danger, and so I would like to make a bargain with you. My life in return for theirs."  Frith responds diplomatically, "There is not a day or night that a doe offers her life for her kittens, or some honest captain of Owsla, his life for his chief. But there is no bargain: what is, is what must be."  Hazel's final scene still moves me.

These characters are rabbits, yet they have organized societies with governments and religion.  They have their own language Owsla=army, silflay=eat.   Hazel, Fiver and Bigwig become real characters and you find yourself caught up in their struggle quite easily.   They are rabbits but they are more fleshed out than most Disney characters.

Unlike most Disney movies, Watership Down is thankfully not a musical.  It features only one song played partially during the film.  It is a hauntingly melodic piece called Bright Eyes, sung by Art Garfunkel.

I was excited to show this movie to my sons, but I think I waited too long to do so.  They are both teenagers and were bored in minutes.  They like computer animation, and this film is as far from that as you can get.  To be fair, it does contain a couple of scenes that pointlessly slip in some psychedelic animation.  Batman: Mask of the Phantasm will be the animated movie that causes them to feel nostalgic.  For me, Watership Down will always hold a special place in my heart. 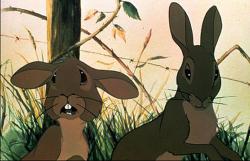 Watching this movie does create a very strong feeling of nostalgia for me.  I've no idea how many times we watched it as kids, but it feels like dozens and dozens of times.  It lead me to read the book, which I went on to read possibly even more times than I saw the movie, and to this day I still rate it as one of the most entertaining books ever written.

In fact, the book is so good that when I watch this movie now I'm always struck by how much the filmmakers left out and how rushed the story feels.  They tried to fit as much as they could into the movie and apart from the mythology stories nearly everything from the book is in here, but it's all condensed.  They might have better served the story by simply removing portions of it and made the remaining portions more detailed.  Cowslip's warren, for instance, in the movie is so short that it loses all emotional impact and they seem to have included it seemly to stay faithful to the novel.

There are several small changes in the adaptation, one of which has always bothered me.  In the book they make a point of saying how Hazel was able to bring all the rabbits who left the Sandleford Warren safely to Watership Down.  In the movie though, Violet (a character not in the book at all) is killed on the journey.

The voice work is all excellent.  Eric, you mentioned all of the lines you rememberd after all these years, and you have to not only give credit to the writers, but also the actors.  I have since seen John Hurt in countless things, but to this day he will always be Hazel to me.  And Richard Briers as Fiver, I later came to know as Tom Goode in The Good Life.  Michael Graham Cox, while less famous, also does a fantastic job as Bigwig.

Although the rabbits themselves are unremarkablly drawn, the landscape and backgrounds look as though they are watercolor paintings.  This combined with the lyrical soundtrack creates a very definite mood.  I do agree with you Eric that the crude animation at the beginning and a couple of times throughout the film is rather jarring.

You mentioned Lapine, the rabbit language, Eric, but you left out one word that leads to one of my favorite quotes in the film, when Bigwig tells Woundwort to, "Silfay hraka!", which means literally, "Eat shit".

It's a rare cartoon that can truly affect me emotionally these days, but the ending of Watership Down never fails to do so.  The story is a journey and a struggle for these rabbits and by the end of it you'll feel as if you've been on it with them.

The animation is simple yet graphically realistic.

Watership Down is a great movie because it is based on a brilliant book. As good as this animated version is it can’t compare to the novel which is so much denser in character development, the rabbit’s cultural background, and in details of the adventure. Also the simplistic and at times crude artwork dates the movie. But none of that matters once you let yourself get caught up in this absolutely terrific story.

Unfortunately my brothers have left me little to add. I too have fond memories of watching Watership Down over and over more than 30 years ago. I remember every single line Eric and Scott mentioned. Here are a few others that always stick with me.

Bigwig sarcastically mimicking Fiver at Cowslip’s Warren… “I'm in a mist! Everything's bad! Oh, I've got a funny feeling in my toe!” Or confronting General Woundwort in their final battle together, Bigwig tells him defiantly, “My Chief told me to defend this run.” And then when the dog attacks, Woundwort exhorts his soldiers to… “Come back and fight! Dogs aren't dangerous!”

The dreamy watercolor animation and the fact that the main characters are rabbits is in direct opposition to the violence of the world being depicted. As Eric wrote the climax is quite tense and bloody for a cartoon. Many animals die over the course of the movie.

One thing I never realized before was that Zero Mostel provided the voice of Kehaar. He steals many scenes and has the perfect accent for one of the most beloved characters in the entire story.

The ending is masterfully done. It will tug at your heart strings without being at all schmaltzy. The characters of Hazel, Fiver, Bigwig, Kehaar, General Woundwort and all the others are so vividly written, drawn and voiced that Watership Down remains a classic for the ages.