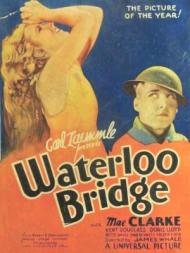 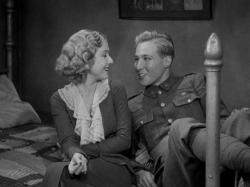 Myra and Roy having a moment of happiness in Waterloo Bridge.

Waterloo Bridge is a, thankfully, pre code film.  Prostitutes have been in many movies but you had to almost guess to figure it out.  Donna Reed in From Here to Eternity (1953) and Jean Arthur in Only Angels Have Wings (1939) both played whores, but were called a chorus girl or a hostess instead.    There is no guessing here with Mae Clarke.

In one scene, Myra (Clarke) gets approached by a British soldier, asking her what she is doing.  She replies, "Looking for a good time, and money for rent." He asks how much the rent is.  She gives him a number.  He looks her up and down and states that rent has gone up, but he can still make it work.  They proceed to get into a cab together.

Myra, is a one time American chorus girl, living in London.  She turned to prostitution to make a meager living during the war.  One of the first scenes is her and a friend hanging out on a street trying to pick up a customer.   With no luck in front of a movie theater, they part ways and Myra goes to Waterloo Bridge, where the soldiers pass over when returning from the front.

An air raid hits while she is helping an old women on the bridge, and she ends up meeting 19 year old Canadian, Roy.  They take the old woman to a shelter and then end up at Myra's.  They have dinner and talk.  At first Myra hits him up for rent money and a nice dress.  He gives it to her willingly without expecting anything in return.  He is innocent and has no clue she is a street walker.  Put off by his kindness she gives him back the money and sends him on his way, but it is too late, he is smitten.  She immediately gets dressed and heads back out to earn some money.

The next day he returns and invites her to his family's country home.  After the death of his father, his mother married a British man and moved to England.   Once there, Myra and the mother come to an almost immediate understanding.  They both know Myra is no good for Roy, but the heart wants what the heart wants.

This is a nice love story of two people caught up in harsh times finding each other.  He is from a nice wealthy family and she from the street.  His innocence puts her off as she cannot be herself around him.  She yearns for him, but it hurts her to be around him, as he only serves to remind her of what she has become.  A wonderfully tragic love story.

Mae Clarke is best known for getting a grapefruit in her kisser, courtesy of James Cagney in The Public Enemy, released earlier in 1931.  Later this busy year, she would reteam with director James Whale in Frankenstein.   In Waterloo Bridge she carries the film and proves to be a very competent actress.

1931 is the year Bette Davis started acting in film.  This is only her third movie.  Too often Whale seems to film her from the back or side, as if hiding her face. I am surprised to have reviewed one of her movies before the Bette Davis loving Patrick did. 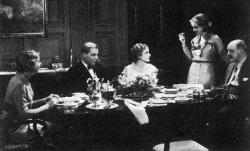 Bette Davis had just turned 23 when she played Janet, the hero’s sister, in this movie. Bad Sister and Seed were her only previous film roles. She has little to do and, as Eric mentioned, James Whale almost never puts the focus of a shot on her. It would not be until the following year when she starred opposite George Arliss in The Man That Played God that her unique talents would begin to be noticed by audiences.

Waterloo Bridge (based on the stage play of the same name) is, as Eric wrote, a wonderfully tragic love story. It was remade by MGM starring Vivien Leigh and Robert Taylor in 1940 and remade again in 1956 under the title Gaby. Mae Clarke, an underrated actress, does a fine job in a highly dramatic role. The shocking ending holds up well.

What gives the movie such emotional resonance is the contrast between Roy’s exuberant innocence and Myra’s bitter worldliness. In one of the best scenes she confesses her true occupation to Roy’s mother. The mother responds with kindness as she genuinely likes Myra, which makes the ending all that much more tragic.

Douglass Montgomery is perfect as the naïve young soldier in love for the first time with a woman he doesn’t really know. When he finally learns the truth it is a beautiful moment that you just know cannot last. The final air raid scene is well staged.

Waterloo Bridge is a tragic romance set against the backdrop of the First World War. This pre-Code drama clips along at a brisk pace. The soldier and the prostitute are two of the oldest archetypes in cinema, rarely has a love affair between them been more poignantly portrayed. 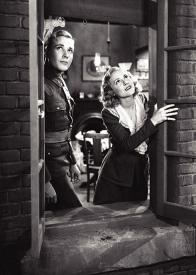 This tragic love story remains emotionally affective more than 80 years after its release. It's a simple melodrama with a soap opera plot, but it's so well and so touchingly done that it manages to evoke a genuine emotional response from anyone with even a trace of romance in their heart.

Like most people, I was only familiar with Mae Clarke because of James Cagney and that grapefruit, but she is quite good here. Because this is pre-code and the story doesn't have to dance around what she does for a living, she is able to come across as more of a fully developed character. The script is honest about her being a street walker and if it wasn't then the full weight of what lies between Myra and Roy wouldn't have been felt as strongly.

On the subject of Mae Clarke and the grapefruit, I have to share an amusing story that I read online, which I hope is true. Public Enemy, the movie where she receives the grapefruit to the face, was so popular that a movie theater in Times Square ran it 24 hours a day. Mae's husband had the times memorized when the grapefruit scene was shown and would sometimes buy a movie ticket at that time, pop in to see his wife get a grapefruit shoved in her face and then leave.

The supporting cast is also quite good. Roy's deaf father, played by Frederick Kerr, is a scene stealer and provides some needed comic relief. Likewise Ethel Griffies brings some humor to the drama as the busybody landlady, Mrs. Hobley. Bette Davis isn't given much of a chance to shine as you both mentioned. In fact, one of her scenes takes place off camera as she's supposed to be playing tennis with her father, but we only hear the match, while the camera remains on the spectators.

Along with Myra's occupation, the film has one other scene that could only appear in a pre-code film. At the very beginning of the movie, Myra is shown backstage in a dressing room filled with chorus girls in their underwear with one girl asking the other girl if she'd borrowed her underwear. There are also quite a few nipples in evidence through the bras. I wonder if the heating bills for sound stages increased following the code, because you never see them after it went into effect.

I agree with you Patrick, poignant is the perfect word to describe the love story between Roy and Myra. I suspected it would end in a similar way to which it did, but I kept hoping for a happy ending anyway.