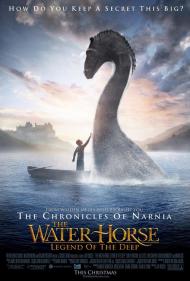 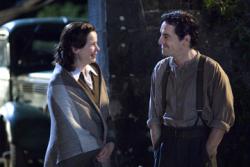 Emily Watson and Ben Chaplin in The Water Horse: Legend of the Deep

Waterhorse is one part Eragon and one part Flags of our Fathers and one part Masterpiece Theater. Although this fable contains more cliches than a politicians speech, it still manages to charm.

As the movie opens, a couple of young American tourists are staring at the famous, bogus, photograph of the Lochness monster in a Scottish pub. An old local man offers to tell them the story about it all. They listen and the plot begins in World War II. A young boy, Angus, finds a blue glowing rock that ends up being a dinosaur egg. The egg hatches and the boy and dinosaur, named Crusoe, have a few adventures in the manor home where his mother is a maid and his father was the handyman before going off to war. Eventually Crusoe gets too big and is moved to the loch. A battalion of English soldiers move into the manor home and establish a base to watch for any possible German submarines entering the loch. The final scenes are an exciting confrontation between the soldiers and Crusoe.

Where as the movie's selling point is the CGI dinosaur, the real emotional impact comes from the characters. Angus misses his dad terribly. He marks his calendar to the day his dad will come home. His mother has a secret that she keeps from him. A new handyman arrives who has some emotional baggage of his own. The officer in charge has the hots for Angus's mother but she and the new handyman are attracted to each other from their first meeting. This, of course, causes some friction between the men.

Watson and Chaplin are great! They have very little dialogue yet convey so much emotion. They hold themselves in ways that speak volumes about their wounds. Although Angus is the starring role, Watson and Chaplin ground the movie in reality. This is a blessing and a curse. They garner more emotional attachment than the boy and the dinosaur. When Angus's mother finally sees the water horse the movie hits a snag. Watson is playing a woman very grounded in reality, so when she becomes involved in the fantasy aspect of the movie it is like Howard's End meets Jurassic Park.

I am not sure if this makes sense, but the director and cast did too good of a job. I could have enjoyed this movie even without the computer animated sea monster. The characters are strong enough to carry this movie without it. 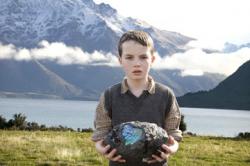 Alex Etel in Water Horse: Legend of the Deep.

I do agree with you Eric that the human characters are strong enough to carry the movie on their own.  They could have played up the love story and made a decent movie out of it.  I also thought they could have made the Water Horse be just a figment of Angus' young imagination as a way of his coping with the loss of his father at sea.

Where I think you're wrong Eric is when you say the mom and the handyman garner more emotion than Angus.  It's easier to relate to the emotion between her and him than it is between Angus and Crusoe, but the emotional center of this story is Angus coming to grips with his father's death.  I think the reason the movie is shown as a story being told by an old man is so that you can doubt the existence of the Water Horse, but still believe that it was that year when Angus experienced the emotions that he experienced.

I also disagree Eric when you say that the new officer has the hots for the mom.  Don't forget this is Scotland in the 1940s when an aristocratic officer would find a housekeeper far beneath him.  I found his attitude towards her to be more patronizing than of a sexual nature, as if he knew what was better for her and her son than she did.

The setting of the movie also plays a big part of the story.  The loch and the mountains around it are absolutely stunning and made me want to visit Scotland.  It's filmed to be as picturesque as possible and it looks like a hell of a nice place to grow up.

Of the main cast only Brian Cox was actually born in Scotland.  Chaplin, Watson and young Alex Etel do a passable Scottish accent but it slips quite often.  It doesn't hurt the story, but it is definitely noticable at times.

The creature itself is well done and adds some nice humor, especially when it's small and running around the house. They could have made this movie without it, but it wouldn't have been as much fun. 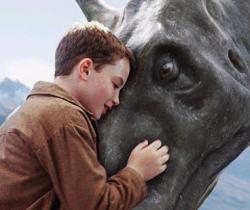 A boy and his water horse.

I enjoyed this movie. It tells its charming story well, is peopled with likable characters, and features decent CGI effects. I found myself easily caught up in Angus' tale and I definitely wanted to see how it would all play out. I agree the acting is first rate.

As for the question of the officer and the housekeeper I agree with Eric. He most certainly has the hots for Angus' mom. OK, he may not want to marry her but he would certainly fancy a roll in the hay anyway. Also the movie makes a point of having the officers treat her as the lady of the manor and not as a servant. She dines with them in her honor even.

Based on the 1990 children's book of the same title by Dick King-Smith (he also created the fictional pig Babe) The Water Horse takes liberties with the geography of Scotland's most famous loch. In the movie it is a salt water lake connected to the open sea via a wide channel. In reality Loch Ness contains fresh water and is connected to the sea by the shallow River Ness which flows through the nearby town of Inverness. Therefore, as no submarines could possibly enter the lake, the nets and military activity as depicted in the film would have been completely unnecessary. Also the loch itself was doubled by New Zealand's Lake Wakatipu. Although the country estate itself was located in Scotland.

In the scene where Crusoe overturns the boat, one of the men issues a scream of terror. This is actually a stock sound effect known in the industry as the Wilhelm Scream. It dates back to a 1951 movie called Distant Drums but didn't get its name until it was uttered by a character called Private Wilhelm in a 1953 western called The Charge at Feather River. This effect resurfaced to even greater fame after it showed up in the Star Wars and Indiana Jones movies and subsequently was used in several Disney cartoons as well as other big budget movies of the 1980s. It has now become something of an in-joke in the industry.

As for the question of fantasy versus reality, the movie makes no qualms about the fact that the water horse is real. The final scene clinches it. I would have preferred it to have been left more open-ended. I like Scott's suggestion that the story is just a creation of the young boy's imagination used as a coping mechanism against losing his father. It would have given the movie a bigger emotional impact. The most touching moment occurs when Angus says to his mom, “He's not coming back is he?” She thinks he's speaking about Crusoe but in fact he has finally accepted his father's demise.

The Water Horse: Legend of the Deep is a satisfying cinematic experience especially during the early scenes before the creature is set free in the loch. What small child wouldn't want a pet water horse of their own? Literal or figurative this Water Horse entertains.