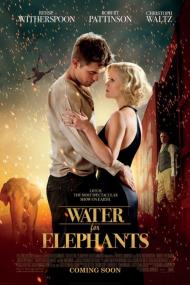 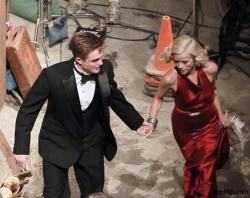 Robert Pattinson and Reese Witherspoon in Water for Elephants.

Having very low expectations is often a movie's best friend. Certainly I expected very little from Water for Elephants and instead merely saw it because it was the one starting closest to when it was convenient for me to go. I was actually surprised to find that while I didn't love it, I didn't hate it either. In fact, with just a few minor alterations, it could have been really good.

Robert Pattinson, while getting second billed to Reese Witherspoon, stars as Jacob, a veterinary student at Cornell University in 1931. Just before he is due to graduate, his parents are both killed in a car accident, which is when he learns they were in huge debts because they'd mortgaged the family home to pay for his education. Distraught, he takes to the road, and winds up working at a circus, first as a general laborer, but eventually as the resident Vet, even though he never passed his final exam.

At first Jacob butts heads with the domineering circus owner, August (Waltz), who runs the troupe with an iron hand. His method of dealing with problem workers is to throw them off the train while it's moving at high speed. Eventually though the two form a rough rapport, despite Jacob's misgivings about August's behavior.

The real draw that keeps Jacob with the circus is August's wife played by Witherspoon. They fall in love and Jacob spends most of the film mooning after her with longing looks and almost kisses. Their love is movie love where apart from finding each other physically attractive, we're never really given a good reason as to why they're in love.

Although the story builds very, very slowly to a climax that is foreshadowed in an opening prologue that features Hal Holbrook as an aged Jacob, it takes way too long to reach that finale and after all the buildup, seems like a bit of a letdown. The length is definitely one of the movie's problems.  It's based on a bestselling book and I have the feeling they wanted to include as much as possible from it into the script so that fans of the novel wouldn't be disappointed, but it could have definitely benefited from a tighter edit. The middle third of the movie feels repetitive and drags quite badly.

As a fan of Witherspoon, but not normally of Pattinson, I would have guessed before the film that I would have liked her better, but while he actually does a great job, Reese seems miscast. She comes across too much like a lady or the girl next door, when clearly the part calls for someone a little lower class. To put it another way, she plays the part like Grace Kelly, when she should have been played like Jean Harlow. Through Jacob's eyes she might seem like an angel, but her back story shows that she's far from it.

Once again Waltz proves that he has a real flair for playing villains with his turn here. Granted it's a bit of a cartoony villain, painted in broad strokes of black and white. He doesn't quite twirl his mustache, but comes pretty close. Still, he definitely gives one of those performances where he is quite fun to hate. His hammier acting actually works well for the tone of the story and Witherspoon would have done well to emulate it.

With a different female lead (or at least a bigger performance from Witherspoon) and a much, much tighter editing job, Water for Elephants could really have been great. As it is, I found it actually not so horrible and worth watching, if not in theater, at least when it becomes available for home viewing. 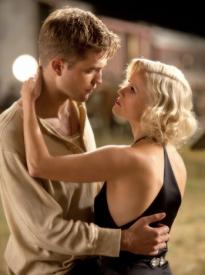 Robert Pattinson and Reese Witherspoon in Water for Elephants

This will likely come across as sexist, but as I started watching Water for Elephants it became clear that it was written by a woman. Marlena does nothing to earn Jacob's attention. She easily and innocently teases him. It is that whole Twilight mentality that all the woman has to bring to the table is her presence, and the men have to do everything else. Although the screenplay was written by Richard LaGravenese, the novel it is based on was written by Sara Gruen.

Right from the start, it lost me. After his parent's death, Jacob talks to a banker and discovers his parents went into debt to put him through college. In response to the news of their sacrifice, he runs off and joins the circus? The idiot never thinks to enquire with the college about making up his final exam that they interrupted with the news of his parent's passing? Would not getting his degree, that he is so close to achieving, be a tribute to his parent's sacrifice as well as the logical next step?

Water for Elephants is far too romantic to deal with such common sense and reality. Jacob says of joining the circus, "I don't know if I picked that circus. But something told me that circus picked me." Such poetry. When looking at their new elephant, Jacob says to Marlena, "I am confessing that I love you." It creates an awkward moment until Jacob tells her that it is the name of the song playing. Aww, how cute.

Another ridiculous scene occurs shortly thereafter when Jacob has a formal dinner with Marlena and August, and Jacob decides to tell his ornery, prone to violence boss that he is not a licensed veterinarian as he led him to believe. August's response surprises him, "You think the fat lady weighs 800 pounds?" Dishonesty is clearly a way of life in the circus.

The characters are all written as cliches. Marlena is the married temptress, enjoying her fame as the star attraction. August is her cruel husband, burdened with responsibilities. Jacob is the innocent outsider, going along for the ride.

I am a fan of Reese Witherspoon but agree with Scott that she underplays the part. Scarlett Johansson was originally up for the role and I believe could have better played this flirtatious, vain show girl from humble beginnings. I agree that Waltz steals his scenes, but it did not make sense that a man whose income depends on animals, and has been around them for so long would treat them so badly. Even a character in the film calls this plot point to task, "I don't understand why a man like that would want to be around animals in the first place?"

Robert Pattinson is decent as the young wide eyed hero who betrays his parents memory and tries to steal another man's wife. "Everything is an illusion." He narrates, and that is the theme of the film. Everyone is pretending to be someone they are not or denying their true feelings. Pattinson merely has to play the pretty boy caught in a world of adults.

As Scott wrote, the plot drags on to the foreshadowed disaster. In the meantime, we have to sit through longing looks and suspicious glances. The dialogue is often groan inducing. One morning, August says to Marlena, "I slept like a baby last night, Thank you darling." Referring to the sex Marlena provided him with the night before to cover up her guilt of almost kissing Jacob. Like I wrote, this was clearly written by a woman. 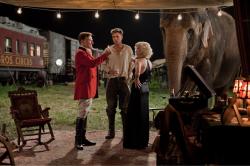 Amazing Eric. You were able to guess the novel this movie was based on was written by a woman and just think you only had a 50/50 chance of being right. But what you may not know is that Richard LaGravenese made several key changes from the book that would only be written from a man's perspective. Oh and Eric, that scene you mentioned in your final paragraph as evidence it was written by a woman, wasn't. It was added by LaGravenese for the movie.

In the novel Marlena is much more independent than she is written in the movie. She leaves August on her own after he beats her and she goes to a hotel. When she eventually returns to the circus she does not reunite with August (in the book he is only the head animal trainer – the owner is a man called Uncle Al) but instead begins secretly meeting Jacob and becomes pregnant with his child. In the movie Marlena is weak and can only act after being encouraged to do so by Jacob. Sounds like a man's fantasy to me.

Water for Elephants is an old fashioned Hollywood movie. The time period and setting is vividly evoked and the cinematography is exquisite. Christoph Waltz hams it up beautifully in the showiest role. I too found Robert Pattinson to be quite good here and I agree that Reese Witherspoon was miscast. Although she deserves credit for throwing herself into the part.

The plot may not be the most original and it does drag on a bit longer than needed but for the most part I enjoyed this movie. Jacob is easy to identify with and I was caught up in the romance of his life and was interested in seeing what would happen next. As kids didn't we all dream of running away to join the circus?