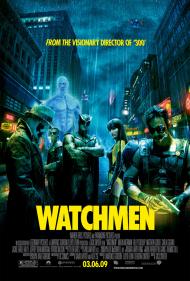 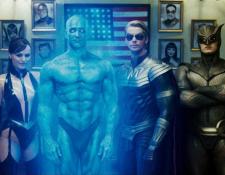 The Watchmen is an epic superhero movie based on the classic graphic novel of the 1980s. Like any movie based on a seminal work there's been lots of speculation about what they would change or delete in the big screen version. Happily I can state that I never read the graphic novel and so didn't have to worry about any of that nonsense and was therefore able to just watch and enjoy this movie on its own merits, which are considerable.

The story is set in an alternate version of Earth during the 1980s, with lots of flashbacks to decades before to flesh out the characters. In this version of Earth there really are superheroes and they've been influencing history since the 1940s. For example, with the help of these superheroes, America won the Vietnam War and with that victory, Richard Nixon went on to serve at least three terms as President, proving so popular that he was able to repeal Presidential term limits. One thing that isn't different on this Earth is that during the 1980s the Cold War between the USA and the USSR is very much alive. A symbolic Doomsday Clock, that charts the level of hostility between the two nations, stands at 5 minutes to midnight (with midnight being full-scale nuclear war).

Although the Cold War looms like a mushroom cloud over everything that happens, the real story is told through the characters. Masked vigilantes, while still used by the government, have been made illegal, so The Watchmen, a once mighty league of superheroes, have now mostly retired. When the Comedian, another and most ironically named superhero, is murdered, the group is once more drawn together to discover the identity of the murderer and to possibly help avert World War III and to also resolve some long standing issues that the group has amongst themselves.

While the entire cast is uniformly great, it is Jackie Earle Haley's Rorschach that steals the movie. He's very much an anti-hero. A true vigilante who will kill in the name of justice and do just about anything else he needs to, usually in the most violent and bloody way possible. He's the only member of the group who never took off his mask and continued to do his thing outside the law. It is he who gets the plot going following the Comedian's death.

Unlike almost any other previous superhero movie, this one is aimed squarely at adults. There's blood, some graphic gore, nudity (I lost count of the number of times Dr. Manhattan's blue penis is visible), sex and most importantly a plot that has some real depth and characters who are more than just two-dimensional stereotypes. Some of the heroes behave as villains and some of them are just plain assholes.

I really only have one complaint with the movie and that is the ending, which feels rushed. It's the only part of the story where I wish I had read the graphic novel, because I don't feel the movie explains it very well, or rather it rushes through it. Perhaps I was just a bit slow on the uptake but it actually took me a bit to quite grasp exactly what the villian's plan was.

This is a long movie, but necessarily so. You couldn't tell this story in less time and I almost wish that it had been longer, or perhaps broken in to two movies. There is so much going on and we learn so much about each of the characters, but there seems to be so much more that we don't learn. It's a very deep and rich story that could have been expanded on even more.

Visually, it is without flaw. The special effects and the look and feel of the movie are excellent and are everything you would expect from Zack Snyder, the director of 300. 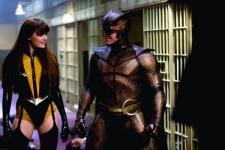 With Watchmen and The Dark Knight the line between superhero and villain has become a bit grey. In both films a hero allows himself to be considered a bad guy in the name of maintaining a peaceful status quo. It makes for much deeper characters, and matures the genre to a level never before seen.

The one thing that stuck with me throughout the movie is that, other than Dr Manhattan, none of the super heroes have any super powers. They all fight well and move about like ninjas, and Nite Owl II has plenty of gadgets, but all are very human. All of them can die from a bullet. They have emotional dilemmas in their personal lives. Some have romantic issues, while others have God complexes. All of them have insecurities.

My personal favorite is Nite Owl II. Whereas Superman pretends to be a nerd as Clark Kent, Nite Owl II is sincerely a social dweeb when not in costume. Wilson plays Dan and Nite Owl II with equal success. He can kick a hall way full of convicts ass, but is very akward when making love to Laurie. My only question for him is does he have to show his naked butt in every movie he makes?

Because each character has their own origin and storyline, the movie runs long. I sit here trying to think of what could have been cut to trim it down, but nothing comes to mind. Everything has a part to play in the plot. Go to see Watchmen. Get lost in the story and its well earned “R” rating, but remember to use the bathroom before you find your seat. 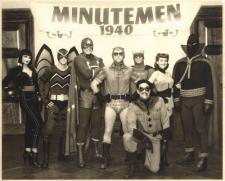 The Watchmen is hands down the best superhero movie ever made. Like my brothers I had never read the graphic novel and so the entire movie washed over me with thrilling newness. This is definitely an epic. It takes you into an alternate world that is at once original and yet familiar, especially for anyone old enough to remember the 1980’s. The flashbacks to the 40’s, 50’s, 60’s and 70’s are equally nostalgic and essential to both plot and character development.

While Scott’s favorite character was Rorschach and Eric’s was Nite Owl II, mine would have to be the original Silk Spectre. She is a quintessential 1940’s dame. She plays an important part in the story and the relationship between her and her daughter is very well written. I like how she is shown as both the young hottie and as the bitter drunken flirt she turns into. Her character is both sad and uplifting as she is a true survivor.

Dr. Manhattan is a brilliant character. And I certainly didn’t mind all the screen-time given his blue penis. He has God-like powers, but unlike Superman he constantly struggles to maintain any semblance of humanity. There is not a single hero in the movie that is without easily identifiable flaws.

The story arc and character development are mixed in effortlessly with the action. Never does the movie seem to crawl. I agree with Scott that it is visually stunning, whether showing a spectacular vista on Mars or some disgusting act of gore and carnage. And I had no problem with the ending. It didn’t feel rushed to me at all.

The violence, language and sexual content certainly distinguish Watchmen from every other superhero movie that has come before it. All of this heavy material is beautifully balanced with humor. In fact this movie is great on so many levels that I can’t wait to watch it again.