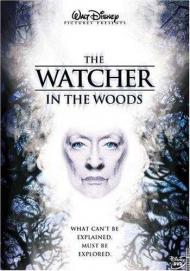 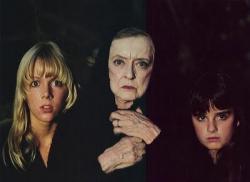 Lynn-Holly Johnson, Bette Davis and Kyle Richards in The Watcher in the Woods.

The Watcher in the Woods is an unusual mystery/thriller with a twist of science/fiction from Walt Disney Studios in 1980. It was originally intended to be Disney’s first ever PG rated movie but that honor went instead to The Black Hole when Watcher in the Woods did poorly in a test screening and Disney re-shot the ending. The DVD includes the official version and two alternate endings which include more elaborate special effects sequences which Disney ultimately decided not to use.

Based on the book by Florence Engel Randall, The Watcher in the Woods begins like your typical horror movie. A nice American family moves into a secluded English manor house whose mysterious owner lives in its nearby cottage. Almost immediately the two daughters begin experiencing strange phenomena such as a feeling of being watched and hearing voices. In one scary scene the older daughter looks in a mirror and she casts no reflection. She then sees the image of a blindfolded young girl in the mirror.

Bette Davis was under contract with Disney Studios at the time, having just starred in the very successful Return from Witch Mountain. She is top billed but has a supporting role as Mrs. Aylwood, the eccentric lady of the manor. It turns out that her daughter disappeared under mysterious circumstances some thirty years earlier during a total solar eclipse. Unraveling the secret to the missing girl is the crux of the story.

There is a brief flashback scene where Davis’ character is shown as a woman in her forties. Although Bette Davis was past seventy at the time she insisted on filming this scene with youthful makeup. It didn’t work and she later admitted so. The scene was re-shot with a younger actress playing the part.

On the plus side the movie does a great job of setting up the eerie atmosphere. It was filmed on location in England and the cinematography is quite good. The special effects hold up well since they are achieved subtly. Adding to the suspenseful mood is a wonderful musical score including a haunting melody played by a music box.

On the negative side is the amateurish acting by Lynn-Holly Johnson. Unfortunately she has the biggest role in the movie and nearly ruins it with her bad emoting. Apparently Bette Davis realized this and wanted Diane Lane for the part of Jan. The then unknown actress auditioned but failed to snag the role. It would certainly have made for a better and more memorable movie if she had been cast.

What really happened to the young Karen Aylwood? Well I’m not going to say. But it is unusual and not what you might expect. The alternate endings, while more elaborate, also seem more dated because of the cheesy special effects used in those few brief scenes. The official version leaves more to the viewer’s imagination and is therefore more satisfying. It also features Bette Davis’ best acting of the entire production.

The Watcher in the Woods is an interesting curiosity of a movie that, while aimed at children, will also entertain less jaded adults. 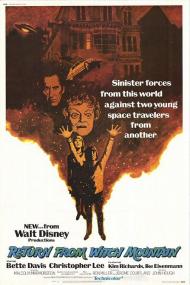