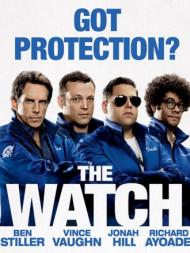 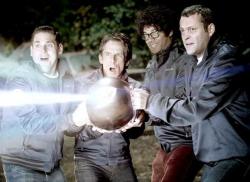 The Watch delivers the type of  low brow humor we have come to expect from the director of Hot Rod and the writers of Superbad.   The two leads are middle aged men but the jokes are juvenile.   No matter how sophomoric though, I still found myself laughing at every dick joke as much as my teenage sons.

Ben Stiller plays Evan, a self centered Costco store manager who decides to start a neighborhood watch after someone gets murdered at his store.  He puts the word out at a local football game.  Three men join him at his house for a meeting.  Bob is married with a mouthy teenage daughter.  He is more interested in making friends than capturing a murderer.  Franklin is a reject from the police academy who sees the group as being vigilantes. Jamarcus is British who dreams of saving a Korean girl who shows her gratitude by sucking on his balls.

They soon discover that the criminals in question are in fact aliens from another planet.  While investigating the alien plot they must also deal with personal issues.  Evan and his wife are having problems conceiving.  At one point the four men arrive at Evan's home and find his wife sitting on top of their dinning room table wearing lingerie with her legs spread wide stating, "I have an opening you can fill." Thinking it is only her husband walking in.

Hardly any questions about the aliens get answered.  Where are they from?  What do they want?  How did they lose that weapon?  What was it for?  How did stopping the aliens on Earth stop the aliens in orbit?   This is a movie best left unquestioned.  Just sit back and enjoy the cast as they make a mediocre film better than it deserves to be.   Their charm alone makes these guys likable and you will find yourself rooting for them through every single juvenile joke. 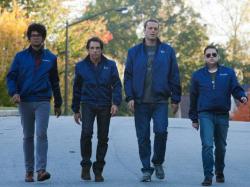 I don't mind lowbrow or sophomoric humor, so long as it's funny, but not all of it is here. As is the case with many of the movies from this cast and these filmmakers, many of the jokes feel improvised and not all of them work. I still enjoyed this movie somewhat, just clearly not as much as Eric seemed to.

For every funny line there's a scene like the four stars singing “You Ain't Seen Nothing Yet” or the scene shown in every preview where Ben Stiller and Jonah Hill argue back and forth in the face of the young teenager. Too often it feels like the cast is having more fun than the audience.

The cast has certainly been funnier in other movies. Ben Stiller and Vince Vaughn were good together in Dodgeball. Richard Ayoade played Moss in The IT Crowd, one of the funniest sitcoms to come out of Britain in recent years. Like Stephen Merchant in last year's Hall Pass, he is the token Englishman thrown into the mix. Ironically, I think I laughed more at Jonah Hill than any of the others, and he's my last favorite actor in the group. Will Forte also provides a few laughs in a supporting role.

While I was disappointed overall, there are some funny scenes. The group's reaction to finding their first dead alien leads to a humorous montage. Although the plot twist revealed later in the movie makes the reaction of one of the members in that montage nonsensical.

It's true that not everything is explained, but some of the questions Eric asks are answered. The aliens are there to conquer the Earth. The “weapon” was their transmitter and it was obviously dropped by the Alien they hit with their car. I suppose we'll find out whether the Armada is still coming if they make a sequel, which based on its reception doesn't seem likely.

As Eric said, the cast makes the film better than it deserves to be, but in my opinion they just make a poor movie into a mediocre one. I can't imagine ever wanting to watch this one again.