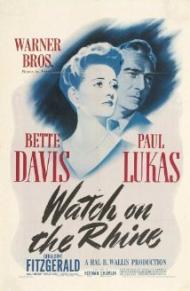 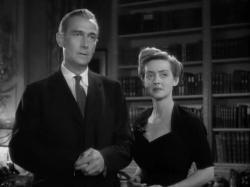 Paul Lukas and Bette Davis in Watch on the Rhine.

Watch on the Rhine is set in April, 1940 right before Nazi Germany stormed across Europe, marching into Paris before the end of June. It's based on the 1941 Lillian Hellman play (with adapted screenplay by her longtime paramour, author Dashiell Hammett), which brought the threat and stench of war to American homes months before Pearl Harbor. Paul Lukas (recreating the role he originated on the stage) stars as German born engineer Kurt Muller, who has spent the last 8 years of his life fighting against the growing threat of fascism (think a slightly older Victor Laszlo). As the movie opens he is arriving in the United States through Mexico with his American born wife and their three adolescent children.

We first meet the Mullers as they travel by train across the country. Their three children are Joshua, Babette and Bodo. Joshua is nearly a man while youngest son Bodo is precocious and very talkative. His sister Babette corrects him on how to speak and behave in a new country. They arrive at the stately childhood home of Kurt's wife Sara, near Washington D.C., for some much needed R & R only to find the war's far reaching grasp waiting for them in the form of an exiled Romanian count who's in cahoots with Nazis at the German Embassy. Sara hasn't seen her mother or brother since her marriage some eighteen years earlier.

At the time the story is set the United States hadn't yet entered the war so the climactic plot development raises an interesting moral question. What, exactly, is the difference between an act of murder and an act of war? By the time this picture hit theaters America was at war and so this question became moot and instead its message of brave sacrifice served as very well-acted propaganda. In perhaps the movie's most famous line, Sara's mother -speaking for America- states, “We've been shaken out of the magnolias.”

Not only is Kurt Muller similar to Victor Laszlo but this movie also answers the trivia question, “Who won the Oscar over Humphrey Bogart in Casablanca?” The answer is Paul Lukas in Watch on the Rhine. After watching his impassioned yet nuanced acting it is easy to see why he won. At the time it was hailed as one of the greatest performances in the history of the movies.

The supporting cast includes the Oscar nominated Lucile Watson (also recreating her stage role) as Sara's opinionated but loving mother, Geraldine Fitzgerald in a small role as the wife of the Romanian count, and Beulah Bondi as a longtime family friend. Donald Woods is good as the brother and George Coulouris hits all the right notes as the opportunistic count.

Oh and Bette Davis plays Sara Muller. At the insistence of the brass at Warner Bros. she was given top billing above the title. She was their reigning queen of the box office and they wanted her to help bring in audiences, but it's clearly a supporting role. Missing are her trademark histrionics with cigarette in hand and those big eyeballs rolling towards the ceiling. Instead we get a subdued Davis playing a faithful self-sacrificing wife and mother. She was 35 playing 38 and during the opening scenes she wears very little makeup. One of her greatest strengths as an actress was her willingness (some would say eagerness) to forgo vanity for a role.

One of my favorite scenes happens after Sara discovers the count has been snooping through their belongings. She enters the living room where everyone is sitting around listening to Kurt playing the piano. She sits next to him and surreptitiously passes this information to her husband. She covers his astonishment by playing the piano with one hand to keep everyone else from guessing what is going on. They have an easy communication like a real-life husband and wife and it's a fascinating little moment in a great, yet nearly forgotten, motion picture. 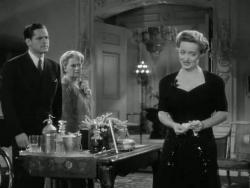 George Coulouris, Geraldine Fitzgerald and Bette Davis in Watch on the Rhine

Yes, the relationship between Sara and Kurt is wonderful. They have been through so much together that they can read each other extremely well. Look at the scene near the end where all Kurt has to do is look at Sara and Sara knows what he wants. After certain events, Sara knows, without talking to Kurt, what needs to be done next. I would have loved if this film had spent more time on them. They have endured much hardship and intrigue in many different countries. They have a story to tell.

I wish however, that the children had been left out. The three actors who play them are unconvincing, but I blame that more on the script than their acting. They do not act or speak like children. The youngest son is pathetic, pointing out things as if giving an oral book report. The young daughter speaks like someone much older than herself. When Kurt tells his children he is leaving, possibly for good, his daughter says, “You are talking to us as if we were children.” And, “We’ve had a most enjoyable life papa.”

The parents likewise talk to their children more like a teacher or a distant relative than a parent. At one point Sara tells her daughter, “You’re a nice girl Betty.” Who responds, “Thank you Mama.” When Kurt has decided to returned to Germany, he pulls his eldest son aside and gives him a speech containing such lines as, “You are young. You are smart and you are strong. You’re a fine investment for our work.”

As far as I know, Lillian Hellman never had children of her own. It shows in her writing. Even when Paul Lukas is emotionally telling his children goodbye, the scene hits false notes. Sure, these kids have lived lives that most never have but they are still children and would act as such. There is nothing sincere in their performances or in anyone’s reaction to them.

Where Hellman’s writing succeeds is with the adult characters. Sara’s Mom comes on like spit and acid but has a heart of gold when it comes to her family. She bosses around her servants with privileged ease. I like how her butler stands up to her though. She blatantly insults her best friend and then demands she help her out. She barges into her husband’s law firm, walking into everyone’s office without a single knock.

Having spent so much of the film demonstrating her confidence and authority, she suddenly becomes quiet and reserved when she discovers she has given refuge to a Nazi conspirator. I kept waiting for her to tell him off as she bears witnesses to him threaten the life of her only son-in-law. It seemed very out of character for her to stay quiet. I never bought that this out spoken woman, who takes so much pride in her family and home, would stand quietly by while a “guest” in her home black mailed her daughters husband. It is an annoying contradiction to her character.

This film was made for one reason only, propaganda. The entire movie is a lecture on the evils of fascism and the glory of fighting it. Several times Kurt or Sara gives a speech standing in the middle of the room while the rest of the cast listen in rapt admiration. This film is as much a lecture as it is a story. Kurt, “I fight against fascism. That is my trade.” Sara, “When the time comes. When it comes, I will do my best.” Sure, this film was made for a reason in 1943, much as many were. Unfortunately, the preaching too often sacrifices the entertainment value.