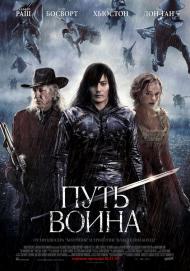 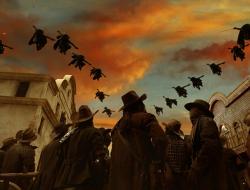 These ninjas are more pesky than indians.

Although some film makers like a creative approach to film making, some rules should never be broken.  The first rule for westerns is to film them on location, or at least outside.  The Warrior's Way was filmed in a studio using green screen.  Considering also that this is a movie that involves cowboys fighting ninjas in a town full of carneys and you have a phantasmagorical mess.

Chinese warrior Yang gets a big target placed on his head after killing the #1 swordsman of a rival tribe.  With an infant he rescued in tow, he sails away to a new world.  He comes across a western town run by a lost carnival troop who have high hopes of running a carnival in their town as income.  The place is an absolute CGI desert waste land.

The only people, besides Yang, who ever seemed to visit it were a gang of marauders who terrorized the town and almost raped its one and only resident hottie, Lynne.   Some ten years later, Yang arrives to take up a life away from violence running a laundry, that was once owned by a distant relative.  He and Lynne strike up a friendship and a very slow romance.

Not much action occurs for nearly one hour.  We get to know some town people and Lynne's history.  He plants a beautiful flower garden.  Eventually the outlaw gang returns for its ten year marauding anniversary.  This coincides with the rival Chinese tribe showing up to kill Yang and take his sword.  The ending is a huge battle between the ninjas and the outlaws with the town folks caught in the middle.

Geoffrey Rush plays the stereotypical drunken gunslinger.  He kept reminding me of Gene Wilder from Blazing Saddles, only Rush is never shown smoking pot.   He had the one good line in the previews but for the final film they cut him saying, "Ninjas...damn!"

Dong-gun Jang is fairly dull and not much of an actor.  He has a more memorable name than actual screen presence.  Compared to the charming Jackie Chan, Jang is as bland and forgettable as they come.  Just because someone knows martial arts does not mean they can act.  I do not care how good he is in the action scenes, if he cannot deliver a convincing line of dialogue nothing else matters.

Filmed in New Zealand, I am sure the director could have found a decent out door location to film on.  As Peter Jackson showed in The Lord of the Rings movies, New Zealand has some wondrous landscapes.  Why did the film makers choose to waste it?   Considering how bad this movie is though, filming on location would not have helped enough anyway.