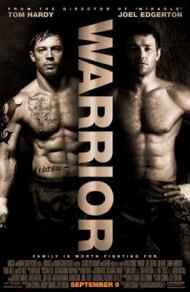 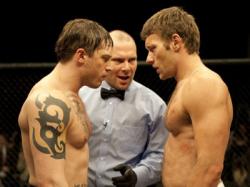 With its been there, done that underdog fighter plot, its reliance on a strong coincidence for the finale and its dangerously high sap levels, Warrior shouldn't be as good as it is. Thanks to some strong performances and some well filmed fight scenes though, it manages to overcome most of its weaknesses and delivers some solid entertainment.

It tells the story of two brothers in Pennsylvania. Brendan is a high-school physics teacher and family man who used to be a Mixed Martial Arts fighter. He was never that successful and he gave it up in favor of a safer method of supporting his family. Tommy is an ex-marine and a high-school wrestling champion with a murky past. The two brothers haven't' seen each other in years. When their parents split up because their father (Nolte) was an abusive drunk, Tommy went with their mother to Tacoma, Washington while Brendan stayed in Pennsylvania because he was in love with his high-school sweetheart, who later became his wife.

Both brothers enter an MMA/UFC tournament because they need money for different reasons. Brendan is upside down on his mortgage and is going to lose his house if he doesn't raise money fast. Tommy is doing it because he promised a marine buddy who died in Iraq that he would look after his family if something happened to them. Brendan is trained by a friend who teaches him control and finesse while Tommy returns to his estranged father for training and is more like an unstoppable tank. Inevitably and as shown in the previews, the two meet in the final round of the tournament, but who will be the winner?

Either of the brother's stories could have been a movie on its own. Tommy's is more melodramatic and he's less of an underdog, so I prefer Brendan's who is fighting for the simple cause of providing for his family. Having them both is almost too much and having it be the two of them who meet in the finale does come across as a coincidence. You could also certainly draw some comparisons between this movie and The Fighter, although to single just that movie out would be unfair because you could also draw comparisons to several other fighter movies.

The cast is a big reason this movie works. Joel Edgerton does a good job as Brendan and Tom Hardy, who bulked up considerably for this part, is also good. Hardy as Tommy is a barely contained volcano of anger who explodes in the fighting cage. Nolte is also good as the repentant father trying to reconnect with his sons after years of abuse. In fact, the cast is better than the script. The scenes between Tommy and his father are good when they're yelling, but the resolution could have been stronger.

I am by no means a UFC fan. I couldn't name a single fighter and I've certainly never seen a match. Even though I enjoyed the fight scenes here in this movie, I can't say that it made me want to go out and watch a real match.

I always like it when a movie surprises me. The surprise here isn't in the plot, which is fairly predictable, but just in how enjoyable it all it is.

Tom Hardy and Nick Nolte in The Warrior

Warrior is as loaded with testosterone as it is male angst.  The two leads have daddy issues and women depending on them.  They have bills and legal problems.  Both are haunted by regret and jealousy.  Throw in such cornerstones as the military and sports and you have the epitome of a "guy" drama.

The problem is that there is too much drama.  Some scenes need to be, such as when the brothers confront each other on the beach and in the ring, or any time Nolte is on screen.  However, the movie does not know when to quit.  The scene when Brendan's students beg the principal to use the gymnasium to show the televised fight is treated as if someone's life depended on it.  The music played as they walk away rejected would be appropriate for a wake.

Nolte is good here as the drunk father seeking redemption.  A best supporting nomination would not be too surprising.  Hardy is affective but his character is mostly played on one note.  We hear details of his past but we only see hints of the man behind the iron facade.  Edgerton is in the more likable role.  We are supposed to root for him and we do.  Brendan is a bit less complex than Tommy but his need to win is not selfish.   You may say that Tommy is trying win for his friend's widow but he is actually trying to rid his soul of guilt.

Fighting as a cathartic experience is as old as mankind.  Men fight their enemies but they also fight their friends.  It establishes pecking orders and resolves conflicts.  It releases tension and creates bonds.   Even getting your ass kicked can still be a positive experience.  Sylvester Stallone taught us that in Rocky.

Brendon and Tommy try talking, but it does not get them anywhere.  Both have so many pent up issues with each other and in their lives that it would take years of joint therapy sessions to sort them all out.  Instead, they hurt each other in the ring.   The emotional baggage getting lighter with each landed hit.  They needed to fight.  It was a long time coming.  Every issue is of course not magically fixed, but they have vented so much through the fight that they are now able to be the brothers they should be.

Where as I enjoyed Gavin O'Connor's interesting characters, I was less impressed with his directing.  He is big on the close up, as is standard in dramas, but interaction between actors is what makes a scene great.  When Nolte talks with Edgerton on the front lawn O'Connor cuts back and forth between the actors.  They rarely, if at all, share the screen.  It is a great scene with barely contained anger on Edgerton's part, while Nolte is clearly a wounded man trying hard to stop himself from begging.   Without the actors exchanging lines face to face it loses some emotional impact.

Warrior is a well written film even with the coincidence.  A couple of lighter moments would not have hurt though.  Sure this is a drama, but the music and the mood are rarely brighter than a funeral.   Another lesson from Rocky is that the right music can make even a mundane training scene become inspiring.   The only thing that stayed with me about this soundtrack was how melodramatic it was.

Both my brothers are right. Warrior is an overwrought melodrama with a predictable outcome. You would have to be an idiot not to guess which brother will prevail in their cathartic, climactic showdown, thus taking home the 5 million dollar purse. The pacing could have been better. With the foregone conclusion the plot is heading towards the story should have arrived there a bit faster.

Both Tommy and Brendan are idealized characters. Tommy is physically unstoppable and heroic on the battlefield (even though he has a shameful secret) and Brendan is portrayed as so noble I nearly gagged a few times. On top of his positive qualities as a family man did he really have to be portrayed as a perfect teacher too?

If you can overlook these faults or are a sucker for a good underdog sports story (Warrior gives you two for the price of one) then this is the movie for you. As my brothers pointed out the acting is quite good and keeps the story grounded even during the most saccharine moments. Nolte deserves the accolades he is receiving for his role as the formerly abusive, drunk of a father seeking reconciliation with his estranged sons. In a surprisingly restrained performance he conveys much pain and emotion without relying on theatrical clichés or histrionics. I do hope he relishes the Oscar nomination since Christopher Plummer is sure to win.

The brutal fight scenes are well-staged and executed. The innate bloodlust of the sport is captured in the audience reactions. MMA fighters are the closest modern equivalent to the ancient Roman gladiator. Although I’m not a fan of the sport, the 12-year-old boy in me appreciates the simplicity of watching two men try to best each other in sheer physical prowess and heart. It’s the reason young boys spend so much time pondering that age-old question of just who could win in a fight between two men, either real or fictional.

Warrior, for all its flaws, remains entertaining. Although I never doubted the outcome I still found myself rooting for these brothers to succeed and to reunite as a family.