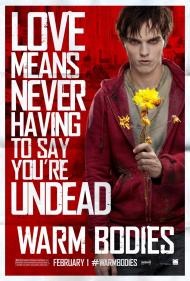 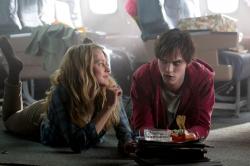 Just a couple of young people hanging out, except he is undead.

Warm Bodies is a retelling of Romeo and Juliet by way of a Zombie apocalypse. It is a clever enough idea but it is not as well executed as it could have been.

In this world over run with the living dead, the human population has mostly retreated to a city surrounded by a huge wall. Julie is the daughter of the human's leader, Grigio. The film opens with Julie (Juliet), her boyfriend Perry (Paris), her nurse friend Nora, and some other young people venturing outside the wall to retrieve medication.

Meanwhile, an introspective Zombie, who only remembers his name starts with an "R" (Romeo), hangs out with other Zombies, including his best friend M (Mercutio) at an airport. R lives in an abandoned airplane on the tarmac that he has filled with objects and vinyl records he finds. After deciding they are hungry, R and M, with some other zombies, go in hunt of food. What they find is Julie and Perry's group of scavenging humans.

The two groups tangle and if you know your Shakespeare, you know Perry does not come through unscathed. When R first lays eyes on Julie, during mid-battle, it is love at first sight. He saves her from the other ravenous zombies and takes her back to his airplane. As he has consumed Perry's brain, he can experience some of Perry's memories, including his time spent with Julie. R keeps Julie trapped in his plane for several days, so of course she falls in love with him.

Their feelings of love begin to turn R back into a human. Their relationship also starts to influence M and the other zombies who soon begin to change as well. Their love has no effect on the bony zombies who are walking dead and have devolved to near skeleton condition, hence their name.

Julie and R find themselves caught between each of their families. Her's wants to kill his, while his wants to devour hers. Yep. It's a pickle.

Although the scene where R tells Julie he ate Perry is awkward, Warm Bodies keeps most of the proceedings light and humorous. This mostly comes through R's inner monologs. "What am I doing with my life? I'm so pale. I should get out more. I should eat better. My posture's horrible."  There is also some action but very little actual tension, scary or romantic, of any kind.