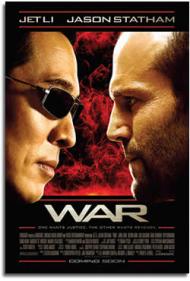 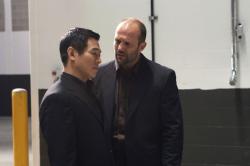 War is a bore. What looks like an action pack film, starring China's coolest martial arts star and England's toughest movie star, is nothing more than a B-grade, dull mess.

FBI agents Jack (Statham) and Goi piss off a Chinese mobster. In an act of revenge, Goi and his family are slaughtered by a mysterious assassin known as Rogue (Li). Jack then spends much of his time looking for Rogue. The previews would have you believe that Statham and Li spend large amounts of screen time fighting each other. They hardly ever do and then only a little at the end.

The amateurs that put this movie together created a ridiculous plot. In one scene, Li summons Statham to a location. Statham arrives with an army of police. Statham gets in Li's face and yells at him. Ooh that was intense. Statham's new partner pulls him away with some lame excuse about why they can't arrest him. The movie is supposed to have a twist ending. I saw it coming a mile away and thought to myself that there was no way this movie could be that stupid, but I was wrong. The dialogue was apparently written for middle schoolers or by middle schoolers. "My gun is bigger than yours." Is, sadly, the movie most memorable line.

The acting is just as bad as everything else in this movie. The only characterization Statham gives Jack is that he constantly carries a tooth pick. Hey Jason, a tooth pick does not create a character, a good script and some acting do that. Li has very few lines and spends most of his time posing, and usually with a sports car.