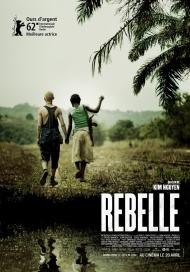 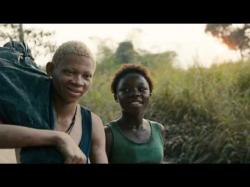 War Witch (Rebelle) is a disturbing movie about a topic that is difficult to imagine for most of us. Set in an unspecified country in Sub-Saharan Africa it tells the story of a young girl named Komona who is kidnapped from her village and forced to become a soldier for a rebel army at the age of 12. This Canadian produced/French language movie was shot mostly in the Democratic Republic of the Congo. It was written and directed by Kim Nguyen.

Komona narrates the story to her unborn child. She got pregnant at the age of 14 after being repeatedly raped by her commander. She gets even with him in a most ingenious and devious (not to mention appropriate) manner, which I won't spoil but that the viewer won't soon forget.

It begins with an attack on her village in which Komona's parents are killed. Next she is forced to learn how to handle an AK-47 and begins going out on missions against the government's official army. She quickly earns a reputation for being able to find where the enemy combatants are hiding at in the jungle. This plus the fact that she was the sole survivor from her village leads the superstitious rebel soldiers to start calling her a war witch. Her reputation grows and she eventually finds herself a sort of good luck charm for the leader of the entire rebel army.

A boy named Magicien who showed her kindness, convinces Komona to run away with him. He tells her that the minute things go bad she will be blamed and that the rebel leader has already killed three previous war witches. They escape and he proclaims his love for her and asks her to marry him. She tells him that first he must bring her a white rooster.

This leads to the happiest section of the story as Magicien dutifully searches for a rare white rooster for his bride to be. For a short time Komona and Magicien are happy. After watching these kids fight like adult soldiers it doesn't seem that odd when they talk of marriage. They have been robbed of their childhoods after all, and they have already faced death in a way few adults ever will. They spend a few idyllic moments together before reality returns with a vengeance.

Rachel Mwanza is remarkable as Komona. She faces unimaginable hardships but somehow never loses her humanity even in the most inhumane situations. Serge Kanyinda is also quite good as Magicien. He is strong and brave, as Komona later tells her baby son.

War Witch is not an easy movie to watch. Humans are capable of such cruelty. Thankfully it runs just 90 minutes which enables the viewer to safely return to their own comfortable world after only briefly visiting this nightmarish place where children are brutally robbed of their innocence and taught to kill by evil men.  Unforgettable. 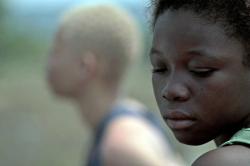 War Witch is a good movie to watch if you want your own troubles to seem minor. It will make you realize that being born in the first world means you've won the lottery in life. Sadly for Komona, the main character in this story, she was born into a brutal, savage world where children are raped, murdered and transformed into killers. It is a disturbing movie, but it's not a perfect film.

Patrick pointed out that it only runs 90 minutes, which makes it one of the briefest of the Oscar nominated films, but there's barely enough story even for that amount of time. It feels more like a short story than it does a full length novel. There are a few scenes that feel like padding.

Rachel Mwanza does an okay job in the lead role, although I wasn't as enamored by her performance as Patrick. She was cast in the part after director Nguyen saw her in a documentary about street children in Kinshasa, the capital of the Republic of Congo, where she had been living since she was abandoned by her parents. The filmmakers have since made arrangements to pay for her education and housing until she turns 18. Unlike Patrick, I never thought the marriage angle or scenes seemed natural and the moments when she's supposed to be in love are her weakest moments.

It's the subject matter that makes this movie so unforgettable. What happens to Komona is graphically disturbing, as is her method of revenge. It's the shocking violence that stays with you and makes you feel such sympathy for her. You want her to find some kind of happiness or peace, but given the world she lives in, a happy ending doesn't seem possible. The filmmakers do at least achieve a satisfying ending. 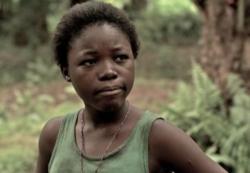 As Patrick wrote, Komona and Magicien had their childhood taken from them, but they remained children. In one scene Magicien and another boy pretend to fight each other as if they know karate. It is a universal occurrence among boys of any country. In another scene Komona laughs telling of girls in her tribe putting on make up. The most telling scene for me is when they and other children watch a Jean-Claude Van Damme  film where he is shown shooting and killing people. These children have done in real life what he is merely pretending to do.

Komona and Magicien are children of very little intellect, believing in magic and ghosts. They do however, have an emotional need for each other that we can all relate to. Magicien likes Komona, protecting her as much as he can. They provide each other with a rare bit of happiness. They live by the seat of their pants, with no real direction other than the pursuit of the elusive white rooster. I wanted very much for these two children to find stability and happiness, but with all that has come before it, I was very doubtful.

Rachel Mwanza was discovered when a documentary was being made about homeless children in the Congo. She was among the children featured. From that she was given the role of Komona, even though she had no formal education and could not read or write. Yet, her performance is never less than soul stirring. Her name should have been on a ballot instead of Quvenzhane Wallis or even Naomi Watts. 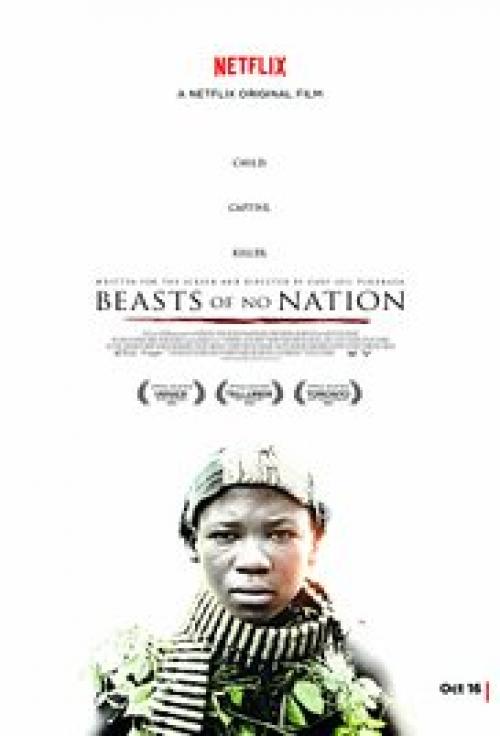