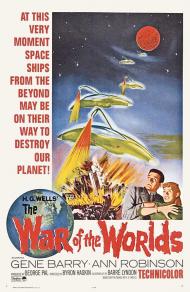 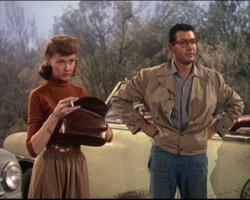 Ann Robinson and Gene Barry in The War of the Worlds.

Just outside a small California town a meteor crashes to earth. The locals are all fascinated and swarm around to get a good look. That night, as only three guys are watching, the meteor opens up and before you know it alien crafts are hovering over the ground disintegrating everyone in sight. As one character puts it, 'They murder everything that moves.' The Army and Air Force are called out to battle but have no effect. The Earth appears doomed.

The hero of the movie is Dr. Clayton Forrester. He and his girlfriend Sylvia - who spends much time screaming - find themselves in one pickle after another, including coming face to face with one of the aliens. In one scene the Martians are attacking Los Angeles. The Dr. is attempting to get a truck of supplies out of the city but gets hijacked by desperate vandals. It's one of the best and most tense scenes in the movie.

The pace and action are good. The movie only slows occasionally to have some scientist talk of explanations and ways of saving themselves. The special effects hold up. The alien ships move slowly but are very threatening nonetheless. At no point do the effects get so bad that you laugh. In fact the whole movie is played so straight that it is easy to overlook those scenes that are filmed on soundstages but are supposed to be outside.

Gene Barry is the only star of note in this movie. He is what can best be described as a working actor. He has appeared in dozens of movies and dozens of television shows since. He started working on television in 1949 and in 2001 he was in the television movie These Old Broads.

The War of the Worlds is a nice find on late night tv. Catch it the next time you can and discover that good science fiction did not begin with Star Trek. 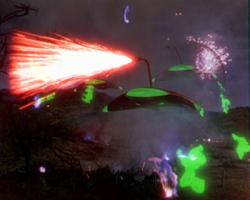 The iconic Martian War Machines in The War of the Worlds.

Good Science Fiction didn't start with Star Trek (but as a side note, if you listen to the sounds of the Martians guns in this movie, they'll sound familiar to any Star Trek fan as Paramount recycled them as the sound of the photon torpedoes for that later television series), but it also didn't start with this movie. There had already been several high profile Science Fiction films prior to this one including a few from the producer of this one, George Pal, perhaps most notably 1951's When Worlds Collide. This was, however, one of the seminal Sci-Fi films of the decade, being one of the highest grossing and best remembered. Although many aspects of the story are dated, my brother is right when he says that the premise and the execution hold up remarkably well more than 60 years later.

I agree most strongly with Eric when it comes to the special effects. There are times when it's quite clear that you're looking at models, but they are so well done that it doesn't matter. It's similar to the way in a modern movie where you know that something is computer generated, but it doesn't matter then either because the effect so perfectly captures the moment. The Martian War Machines are the best effect in the entire film. They are absolutely iconic and a masterpiece of design. Designer Al Nozaki has said that he based them upon manta rays, with the long snake like neck and floating eye being inspired by the ray's tail, while also bearing a resemblance to the body and head of a cobra. It's a design light years ahead of the typical flying saucer so often seen in film's of the period. They truly have an other worldly feel about them, as do the aliens themselves who we wisely only see in glimpses.

At just an hour and 20 minutes, the plot wastes very little time. Following the opening narration we jump straight into the action with mysterious meteors striking the earth. There's not much time for characterization, but we get just enough from Dr. Forrester and Sylvia to care about what happens to them. Gene Barry plays the square jawed scientist and looks a bit like Clark Kent. Ann Robinson's Sylvia is simply the damsel in distress, screaming and crying in fright whenever confronted by something unexpected. There are several exciting and tense sequences, including the first battle around the initial crater and later in the film, the scene Eric mentioned, when looters are tearing Los Angeles apart while the Martians are blasting it to hell.

The ending of the story and the fate of the aliens is well known and similar to how the original story ends. However, I never really thought about it before, not having seen this movie since I was a kid, but it's a pure deus ex machina ending. It has nothing to do with anything humanity does. They're simply passive witnesses to it all. It's also much more overtly religious than I remembered it, with God getting the credit for saving the earth. It still works for the story, but in some ways it's a bit anti-climactic.

Of all the fears of mankind, a fear of the unknown is one of the most common. It's this primal fear that this story plays upon and is why it has remained so popular since its first publication, being remade several times in various mediums, including radio, television, comic books and of course movies. Wells' story is the original, Orson Welle's radio version is legendary, and Spielberg's 2005 remake is highly entertaining, but this version is the definitive one and those iconic War Machines are the probably the first thing that comes to mind when its name is mentioned. 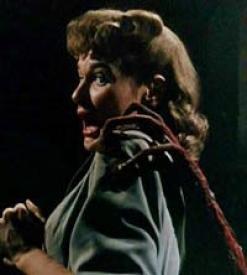 Ann Robinson meets a Martian in The War of the Worlds.

“No one would have believed in the middle of the 20th Century that human affairs were being watched keenly and closely by intelligences greater than Man's. Yet, across the gulf of space on the planet Mars, intellects vast and cool and unsympathetic regarded our Earth with envious eyes, and slowly and surely joined their plans against us.” Thus begins the narration of this sci/fi classic, quite simply one of the very best films of the genre from any decade.

By the 1950s movie magic had reached a level of sophistication where the fantastic plot of the H.G. Wells novel could be successfully translated to the big screen. I agree with both my brothers that the special effects hold up remarkably well. It certainly looks as if a full scale Martian invasion of Earth is taking place. And the script was brilliantly updated to the 1950s. The scene where mankind uses nuclear weapons (futilely) on the space invaders is one of most iconic moments in the movie. The post atomic age added another dimension to the plot that was missing from the original book and the 1938 radio broadcast.

The movie rights to Wells' story were first purchased in 1925 for Cecil B. DeMille, and he was in fact an uncredited executive producer for this movie. Can you picture what his silent version of the story would have looked like? In the 1930s Alfred Hitchcock, then still making movies in England, toyed with the idea himself. RKO, meanwhile, wanted Orson Welles to make The War of the Worlds his debut film, after scaring half the eastern seaboard with his Halloween eve broadcast. Of course he declined the offer and instead gave us a little movie you may have heard of called Citizen Kane. The War of the Worlds includes a tribute to Welles' radio show. Paul Frees impersonates him as a radio announcer reporting on the Martian invasion.

While any of those three men could have made a classic version of the story, it turns out that George Pal was the perfect man to bring The War of the Worlds visually to life. Pal and director Byron Haskin made a formidable team. The Wells' estate was so pleased with his work on this picture that they offered Pal his choice of H.G.'s books to adapt for the screen next (he chose The Time Machine). Together Pal and Haskin manage to keep the story focused and intimate while at the same time showing the widespread destruction and panic. The action and dialogue are superbly balanced, and the pacing is nearly perfect. Why do so many modern movies drag on past their expiration date?

Scott brought up the religious angle and it is surprisingly overt. It manages the difficult feat of striking a chord with those of faith without offending nonbelievers. While it's true mankind is saved in a deus ex machina fashion it doesn't seem at all contrived. God doesn't appear and wave his hand over the earth thus creating new germs to defeat the Martians. It is much more subtle than that. In fact it is one of the most brilliant endings to any story. It makes sense from a biological/scientific standpoint and it provides mankind with a plausible last minute rescue in the face of certain annihilation.

Even if my brothers don't quite agree, The War of the Worlds is a four star classic. 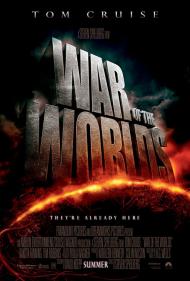