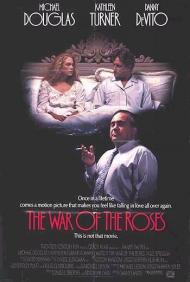 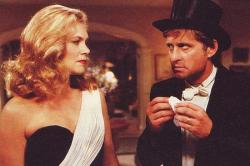 Kathleen Turner and Michael Douglas in War of the Roses

In their third film together, Michael Douglas, Kathleen Turner and Danny DeVito tackle the subject matter of divorce. This dark dramedy is told in flashback by a divorce lawyer to a client.  We never know if this is a true story, within the story, or a fable.  Either way, the characters come across very realistic.

Barbara and Oliver met on a rainy day at a Nantucket auction.  They were immediately attracted to each other.  They ended up in bed that same day.  Barbara said to Oliver, "If we end up together-then this is the most romantic evening of my life. And if we don't, then I'm the world's biggest slut."  Oliver smiled and said, "This is a story we are going to tell our grandchildren."

Oliver is an insecure Harvard student, while Barbara is a gymnast who freely admits that her body has grown too big to be a good one.   They get married and have two children.  Barbara works while Oliver finishes school.  He eventually becomes a lawyer, and makes partner in a firm.   She quits working and they buy a large house which Barbara spends great amounts of money and time redecorating.

One day, Barbara gets an epiphany  that she no longer loves Oliver and wants a divorce.  Oliver yells, "I think you owe me a solid reason. I worked my ass off for you and the kids to have a nice life and you owe me a reason that makes sense. I want to hear it." Barbara snaps back, "Because. When I watch you eat. When I see you asleep. When I look at you lately, I just want to smash your face in."

During the first half of the movie we are on Barbara's side.  Oliver belittles her often.  He does not plan it or make a point to do it, he just does it without thinking.   This is best exemplified in the dinner scene when he is trying to impress his boss.  It is also Barbara that is making the money and buys Oliver his treasured car.

After she asks Oliver for a divorce I was on his side.  She is the one who wants the marriage to end, but expects to keep the house and everything in it.  We clearly see her closet full of shoes and her fur coat.  She has more than been financially remunerated by this marriage.  Oliver is still in love with her, while she no longer has any feelings for him.  She wants out, then she should take the walk, not him.

Both Oliver and Barbara want the house and it becomes the center of contention in the divorce.  Both refuse  to move out.  They bicker constantly. "Stinking bitch!" "Dumb bastard!" "Slut!" "Fuckface!"  They go about sabotaging each other to get the other to move out.  This leads to such things as killing a cat, peeing on dinner and one running the other over.  Nothing works.  The irony being that they end up destroying the one thing they are fighting over, the house.

The one area that seems unrealistic, and unexplored, is how this affects their 17 year old children.  During one argument Oliver yells to Barbara, "You weren't even multiorgasmic before you met me, were you?"  Barbara yells back, "You really expect me to keep on reassuring you sexually even now when we disgust each other?"  We then see that unknown to them, their kids and the maid were standing right next to them and heard every word.

The cast is perfect in their roles.  Douglas can play arrogant in his sleep.  Turner can be awkward in one scene, angry in the next, and when she wants to turn it on, she can become the sexiest woman walking with the mere change of expression.  War of the Roses's greatest accomplishment though, is that it does not wimp out at the end.  This is a dark comedy and the ending is completely appropriate. 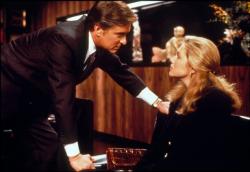 Michael Douglas and Kathleen Turner in The War of the Roses.

Gavin, the divorce attorney played by Danny DeVito, gets the best dialogue as he tells his cautionary tale to a prospective client. First he sets the stage: “There are two dilemmas that rattle the human skull. How do you hold onto someone who won't stay? And how do you get rid of someone who won't go?” Later, in the story himself, he offers this pearl of wisdom to Oliver, “There is no winning! Only degrees of losing!” And finally, he sums up all that Oliver stands to lose when he tells this man who's contemplating divorce, “My father used to say there are four things that tell the world who a man is: his house, his car, his wife and his shoes.” This battle between husband and wife will center on material things, most notably house, car and shoes.

The story begins pleasantly. It isn't until the dinner party scene, after Barbara first asks for a divorce, that it becomes clear things are about to get really ugly. As the violence and petty backstabbing escalates Turner and Douglas really sink their teeth into the parts, until the inevitable moment when they are dangling 30 feet above the floor from that amazing chandelier.

As Eric wrote, director DeVito doesn't pull any punches. The ending is classic. Barbara and Oliver each get what they had coming. I get what you are saying about their kids Eric, but as this is a black comedy it didn't bother me. The point being that these are two such shallow and bitter people that they are horrible parents. Barbara, earlier in the movie, thinks it's good parenting to give her small children all the sweets they want. Not surprisingly they are both obese the next time we see them.

Although Gavin gets the most memorable lines, Oliver and Barbara each get their share as well. My favorite line from Oliver is when he tells his wife, “You have sunk below the deepest layer of prehistoric frog shit at the bottom of a New Jersey scum swamp.” And when the formerly happy couple pass each other on the stairs they greet each other with a series of insults. Him: “Stinking bitch!” Her: “Dumb Bastard!” Him: “Slut!” Her: “Scum!” Him: “Filth!” Her: “Faggot!” Then as she passes the maid, Barbara greets her in a sunny voice, “Morning Susan.”

The War of the Roses takes an over-the-top but quite funny look at divorce. Although it embodies the essence of the 80's yuppie era, it features three timeless performances and remains as entertaining today as when it first came out.

Danny DeVito in War of the Roses.

Ian Fleming wrote a short story called "Quantum of Solace". In it, the Governor of Jamaica tells James Bond the story of a married couple whose marriage disintegrated until the point where they are living in the same divided house. The title refers to this line from the story, which is quite apt in regard to War of the Roses, "They [relationships] can survive anything so long as some kind of basic humanity exists between the two people. When all kindness has gone, when one person obviously and sincerely doesn't care if the other is alive or dead, then it's just no good...I've invented a rather high-sounding title for this basic factor in human relations. I have called it the Law of the Quantum of Solace."

Actually, I have to disagree with my brothers on one point. The movie does pull one punch. When Barbara serves Oliver the pate made out of "dog", the camera then cuts to the dog so that we know she didn't actually kill it. It's one of those odd things in movies that killing or injuring humans can be played for laughs, but deliberately killing a dog is never allowed to be funny. According to DeVito, he always intended to include a shot of the dog, but it is popularly believed that it was inserted after test audiences reacted badly.

I also disagree with you Eric in that in the second half I wasn't on Oliver's side. I wasn't on either of their sides, because frankly they're both selfish and petty people, who deserve exactly what they get. I understand your point Eric, that she's the one who wants out, so she should leave, but she also makes him a very generous financial settlement and the house means more to her than it does to him. He holds on to it to spite her, but neither one ever offers to compromise.

Barbara is crueler to Oliver than he is to her. She stays in the marriage for years past her desire to be in it. Her resentment has been building for years by the time she works up the nerve to ask for the divorce. By waiting, her love doesn't just die, it turns into hate. Oliver, on the other hand, is still in love with Barbara right up until the end. It is she who doesn't have even a Quantum of Solace for him.

Because both of them are such selfish people, it was difficult for me to become emotionally invested in their story. Parts of it are quite funny and I agree with both of you that the dialogue is sharp and funny. DeVito does deliver some of the best lines.

He also does a nice job of direction. I like his use of shadows and especially his use of deep focus. There are several scenes where either Oliver or Barbara is in focus in the foreground, while at the same time the other spouse is in focus in the background. Perhaps DeVito did this to not show bias to either of the Roses.

The cast is terrific. The fact that Douglas and Turner had played a couple twice before and we're used to seeing them together, gives weight to their breakup. DeVito is also good, playing a bit of a slimy lawyer, but not a caricature of one. By the film's end he has become the voice of reason.

I didn't enjoy this movie quite as much as my brothers. It definitely has its moments, but it runs a little long and I disliked both main characters so much that I didn't care what happened to their relationship. I didn't posses a quantum of solace for either of them.