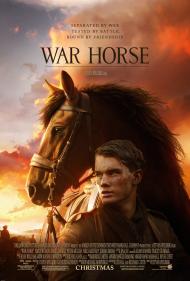 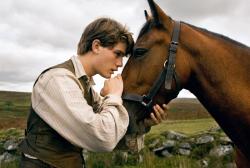 War Horse is Spielberg in full on schmaltz mode with swelling music emphasizing an abundance of  melodramatic moments. Some of it works and some of it doesn't, but all of it looks good, especially the battle scenes. There's a deliberately old fashioned feel to it that some might appreciate.

The plot plays out like a series of a short stories with the same horse at the center of each of them. It begins just before World War I in England, where a poor farmer buys a thoroughbred horse on impulse. His teenage son Albert names the horse Joey and trains him. When the war starts, Albert's father sells Joey to the army where he becomes a calvary officer's horse. From there Joey goes on a series of adventures as his ownership passes from one person to the next until there's finally an emotional reunion at the film's climax that will work best for those who have a high tolerance for schmaltz.

Some of Joey's adventures work better than others. One of the best ones involves his short time as a calvary horse. The English calvary charges a German encampment with sabers in hand, as outdated as they are noble looking. At first they sweep through the Germans, but shortly come face-to-face with modern warfare and the result isn't pretty.

Perhaps unsurprisingly, the film's best moments are the battle scenes. Spielberg proved with Saving Private Ryan that he knows how to film a battle and he does it again here. The final 30 minutes features the battle of the Somme and it's exciting and well filmed. It made me wish that instead of a movie about a horse that Spielberg had made a full-on World War I movie.

Other portions of the film don't work quite as well. There's an interlude with a young French girl and her grandfather that runs too long. A short snippet about two German brothers doesn't really go anywhere. They do add to the running time though and at 2 hours and twenty minutes, it does feel long.

What makes the movie feel so long is that the stories just follow each other, they don't add to each other. There's no cohesiveness to the story apart from the idea that war is hell, which isn't exactly an original thought.

I suppose if you're a horse person you might enjoy this movie more than I. Some people wax poetic about the nobleness of horses, but I've never found them to be all that romantic or inspiring. I'm sure they're intelligent animals, but there are occasions in the movie where the script gives Joey an almost human personality. One of the most genuine emotional moments does come from the horse and that is near the film's climax when Joey runs for his life across a battle field, winding up in no man's land, snared in barbed wire.

Even though it doesn't add up the way it should, enough of it works so that I wasn't really bored. I was just hoping for more. 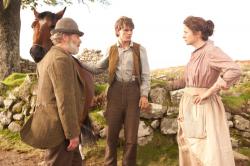 I agree with Scott completely that Warhorse runs too long,  The part with the French girl and her grandfather should have been cut completely.  Not only is it unnecessary, but the actress playing the French girl is not very convincing.   When the Germans raid their house dozens of them rummage through the place taking everything they want but none ever glance into her room where she hid the horses?  No wonder they lost the war.

What I disagree with Scott on is that the stories do not just follow each other, they add to each other. There is a cohesive theme to the story.  Early on Albert learns from his parents just how much they love and need each other.  Captain Nicholls provides comfort to one comrade and a challenge to another.  The young German brothers look out for each other.  The grandfather and the granddaughter are all alone in the world.  Even Joey has his best friend the big black horse.

The cohesive theme of the film is that it is easier to go through a hardship if you have someone with you than it is to go it alone.  It is repeated throughout the film.  When Joey loses the black horse he goes nuts and runs into the barbed wire.  Although only a horse, he is lost without his companion as Albert was when Joey was first taken from him.   It should also be noted that it takes two soldiers working together to release Joey from the wire.

Spielberg runs with the companion theme but by switching characters and story lines we never development enough attachment to any of them, except Albert.  This is the director who had theaters full of adults crying over a dead alien, yet here all that registers is some concern when Joey gets caught in the wires.   Joey is a beautiful animal but his choices are often not his own.  We never see Albert join the service or his family's reaction to it.  Consider our current political world and it is clear that a scene like that is far more relatable than a scene of a horse being taught to jump by an annoyingly cute little girl.

The scenes where Joey is put on the team of horses pulling the large cannon should have become floor scraps in the editing room.  It shows piles of dead horses and horses being horribly treated.  It shows a horse being shot.  When Joey steps in for his horse friend, the film comes far too close to humanizing Joey. This sequence seemed like a holocaust film for horses.

So much could be cut from this film without ever reducing it's meager emotional impact.  Not only is Warhorse long winded, but it often has an old fashioned feel to it.  The scene with Albert arriving home at the end reminded me of the scene in Gone With the Wind where Scarlett O'Hara is standing next to the tree swearing to God as her witness.  That is all fine and dandy for Spielberg but Warhorse's shelf life will come nowhere near that of Gone With the Wind's. 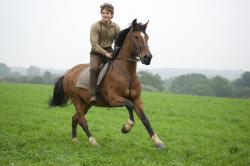 Scott, when I mentioned in the comments for this movie that I didn’t think either your review or Eric’s seemed like this movie deserved the 3 stars you both gave it, you replied that parts of it deserve 4 stars and other parts 2, so you averaged it out to 3. I’ll buy that but I’m still a bit perplexed. I’m sitting here wondering which parts, exactly, of this overindulgent piece of cheap sentiment you thought worthy of 4 stars.

Everything about War Horse is designed to manipulate an emotional response from the viewer. Every character’s actions - from the early scenes with the mean land owner taunting Albert as he attempts to teach Joey to pull the plow, to the ending where the kindly French grandfather gives Joey back to Albert – are designed to produce the biggest lump possible in every audience member’s throat during the impossibly maudlin reunion between a boy and his horse. A reunion that seems to go on and on as every possible loose end is lumped together in one big bowl of gooey syrup.

I’m not averse to good old fashioned sentimental movie making like War Horse purports to be. But Spielberg never gives the story a chance to earn our emotional investment. He spoon feeds us exactly what we are supposed to be feeling in every scene. It’s like a motion picture coloring book where we are told in advance which shade of crayon-feeling to use to color-in each scene. And I agree with my brothers that Albert’s lack of screen time diminishes the emotional impact of the reunion. It had been so long since those early scenes of him and Joey together that I no longer really cared if they found each other again (although it's never in doubt they will).

I enjoyed the brief interlude with the two German brothers. It was about the only part of the movie that contained an element of surprise and, more than any of the overdone battle scenes, truly conveys the horrors and waste of war. The scene where Joey is caught in the barbed wire is likewise well done.

I get Eric’s point about the theme of its being easier to get through a hardship with someone else than it is to go it alone. But that isn’t exactly a profound idea now is it? And how convenient for Joey that wherever he goes and whatever perilous situation he finds himself in there is always a benevolent horse lover around to ensure his well-being.

Even John Williams’ score is overdone. Normally he saves the swelling strings for the big emotional pay-off scene but in War Horse the music seems to crescendo during even the most mundane moments.

I will give the cinematography credit. The movie is beautifully shot and it does successfully capture the look of those old Technicolor chestnuts from Hollywood’s golden age. Like Eric I was reminded of certain scenes in Gone with the Wind during the scene at the end where the sky contains a romantic red glow in the fading hazy russet sunset. A scene earlier on where Albert races Joey alongside an automobile emulates a similar shot from National Velvet.

Scott hit the nail on the head. The script, direction and score for War Horse are all unforgivably schmaltzy.