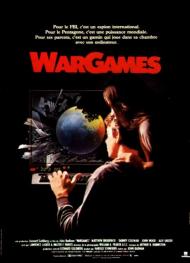 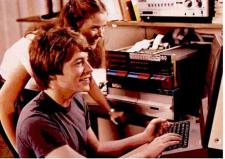 Shall we play a game?

If you're old enough, as I am, to remember the 1980s then you undoubtedly remember how nuclear war seemed a very real threat. When the Berlin wall fell in 1989, the feeling of imminent nuclear danger went away, but not before Hollywood had taken advantage of that feeling of fear and paranoia by producing a plethora of movies that dealt with either an actual nuclear war or at least the threat of one. War Games is one of those movies and although today it feels rather dated, especially with its technology, it is one of the better examples of the genre.

A young Matthew Broderick (in just his second film) stars as David, a Seattle teenager and hacker. Using his, very primitive by today's standards, home computer he is able to dial in via a telephone modem to his school and change his grades and that of his soon-to-be girlfriend's, Jennifer (Sheedy). It's only when he manages to hack into the NORAD defense computer and challenges it to a game of Global Thermonuclear War that he causes a major panic because the computer takes the game seriously and intends on winning it even it means really launching the missiles.

The moral of the story is a good one (that the only way to win a nuclear war is by not having one) but, it dregs up that old theme that has been around in film and literature for centuries and that is the fear of technology. The WOPR computer is the modern Frankenstein, created by man and now to be the instrument of his destruction. While the home computer equipment is of the time, the WOPR itself is the stuff of science-fiction. A computer able to think and reason and communicate via simple English was way in advance of 1983 technology and still beyond ours today. And to paraphrase, computers don't kill people, people kill people (unless I guess if a heavy one fell on top of you).

All around the cast is terrific. Broderick begins his career as the quintessential 1980s teenager (despite already being in his 20s here) and he and future brat-packer Ally Sheedy are cute together with their budding rated-G romance. Fellow go-to 1980s guy Dabney Coleman has a small but important part as the man in charge of the WOPR. The role of Dr. Stephen Falken, the inventor of the WOPR was originally written with John Lennon in mind (which shows how long this script had been kicking around) and was then offered to Stephen Hawking, upon whom it was partly based, but eventually went to British actor, John Wood, who would appear opposite Broderick again in Ladyhawke.

The movie moves along at a good clip and the tension builds through most of it as the military tries to decide whether or not they should retaliate or if they're really even being attacked. And Broderick gets to precede Richard Dean Anderson as a MacGyver type character able to escape from rooms using just a tape recorder and make phone calls using a can's pull-ring.

With its 80s fashions (gotta love those leg warmers on Ally Sheedy), arcade games and attitudes this movie made me rather nostalgic. I loved the character of David at the time and wanted to model myself after him. Of course all I could afford was a Commodore 64 and Ally Sheedy, or a look-a-like, never wanted to date me because of my skills with it. 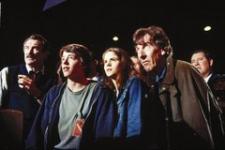 Video games use to be scary.

What is most interesting about War Games is just how misunderstood computers games were. Broderick goes on-line and initiates a game with a computer that is really just a simulation of Russia and the United States having a nuclear war. Why does the computer attempt to actually retaliate? The first words it says are, “Do you want to play a game?” It knows none of it is real.

Why does Hollywood think a self aware computer is so fascinating? 2001: A Space Odyssey, Saturn 5, The Terminator, Wall-E and Eagle Eye all feature a computer that “thinks.” This movie works better as a cold war time capsule than a technology one, since every decade has a movie with the computer in charge theme.

Made during the Reagan years, War Games’s message is anti-nuclear war. The computer runs through all kinds of scenarios between different countries attacking each other at the end, and concludes that the only way to win is to not start one in the first place. AAWWHH, it is good to know that even way back then, Hollywood was pushing it’s politics onto the general public. World War II ended because we dropped nukes on Japan. India might benefit from nuking Pakistan. Palestine might benefit from nuking Israel. Nuclear war is a scary thought, but this movie is naive. Sometimes there are winners.

Eric, you call this movie naïve but your last paragraph sounds incredibly naïve to me. The only reason we won WWII by dropping nuclear bombs on Japan was because they didn’t have them yet. If the Nazis or any of their allies had had atomic weapons the outcome would have been very different. Just how you think it would be beneficial for any of the countries you mentioned to start a nuclear war with another nuclear armed state is beyond me.

Now let’s get to the movie. It is definitely a time capsule of the early 80s. It was funny seeing David playing Galaga at the video arcade. The laundromat where I wash my clothes has an old Galaga game and I was just playing it the other day while my clothes were drying. The computer technology is interesting as well. I remember when Scott got his first computer around the same time this movie came out. I agree that the fear of technology theme is a bit silly as represented here.

I therefore agree that making the computer the “bad guy” takes away from the realism of the movie. It starts off within the realm of plausibility but eventually becomes Science Fiction. I mean c’mon, as advanced as this computer is did it really need to play Tic Tac Toe to learn the futility of nuclear war? Any 5 year old can tell you that 2 countries dropping weapons of mass destruction on each other is a lose/lose situation.

I agree that Broderick and Sheedy are adorable together. Unfortunately they would both peak too soon in terms of talent and success but in 1983 they were about as All-American as you could find. Dabney Coleman was likewise at the peak of his career after the one two punch of 9 to 5 and On Golden Pond.

War Games remains entertaining. The story moves along at a decent clip and the tension mounts right up until the end. It has likable characters to root for played by a talented cast of familiar 1980s faces.