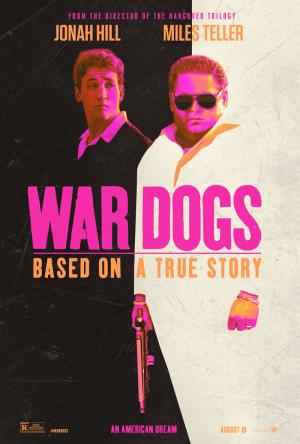 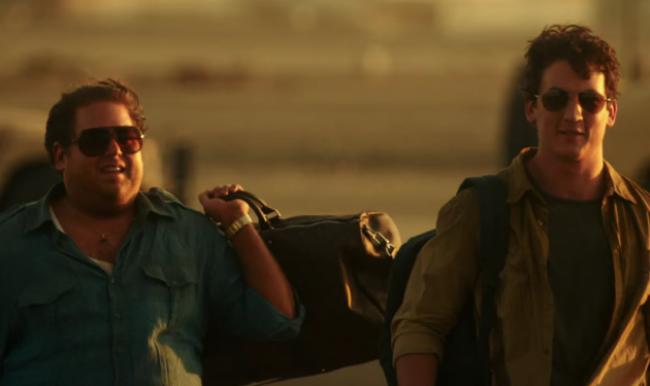 War Dogs is a surprisingly entertaining film from writer/director Todd Phillips, the man responsible for the Hangover films. Based on the true story of two twenty-somethings turned international arms dealers, it's a slickly packaged comedy that is more interested in entertaining than in tackling the deeper implications of the central story.

As much as I'm still not a fan of Johan Hill's, he has turned into a halfway decent actor as he proves once again here. And this despite the odd and annoying laugh his character employs. His Efraim is a loud, crass arms dealer who, upon returning to his hometown of Miami in the early 2000s, recruits his high school friend David (Miles Teller), to join him in selling arms to the US military. Together they scour the US government's websites for smalltime weapon's contracts that are overlooked for the bigger arms dealers, but which represent a large amount of money to them. Soon they are raking in hundreds of thousands of dollars, but inevitably the greed goes to Efraim's head (and up his nose, like his hero Al Pacino in Scarface) and, even if you're unfamiliar with the real life story of these two, their ending is preordained.

Although these two young guys break all kinds of laws, and ultimately endanger the lives of American soldiers and their allies, Phillips seems reluctant to paint them entirely as villains. David, in particular, gets off lightly, and is portrayed as the more innocent of the duo. The one who is duped by his more blatantly crude and greedy partner. It's only because this movie is played as a comedy that it's even possible to really like either of them. Their illegal antics, at least at the beginning, aren't shown to be hurting anyone except for the bureaucracy of the US Government. David, as shown here, even emerges from the story, rewarded and with what feels like a token slap on the wrist. For a movie, it makes sense to keep your protagonist likable, but it's doubtful they would come across so well in real life.

The first hour of the film is definitely the most entertaining. When the pair's first major gun deal runs afoul of Italy's embargo on sending guns to Iraq, the two have them shipped to Lebanon, but are then forced to drive the shipment themselves across the desert, through what they later learn is named, "The Triangle of Death". This sequence is both tense and comical (and has been featured in many of the trailers). The pacing is also much quicker in the first hour.

The second half showcases the final deal of the partnership, which is the biggest deal of their young careers and which ultimately leads to their downfall. Bradley Cooper shows up in a small role (no doubt as a favor to his Hangover director Phillips), wearing oversize, thick glasses as an arms dealer on a terrorist watchlist. Cooper has grown as an actor and he does some nice character work here. There's a slight shift in tone and the pacing slows considerably. I was still invested in the film's outcome, despite the ending being telegraphed from the very start.

During the opening of the film, Teller narrates as David, a very cynical look at war and its causes. Although David and Efraim are shown to be criminals with lax morals and therefore unreliable narrators of their own story, Phillips never really contradicts that viewpoint. Any moral judgement of these two's actions are left up to the viewer. The script is more interested in comic entertainment than in making any kind of definitive statement.