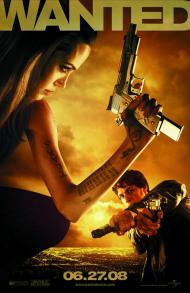 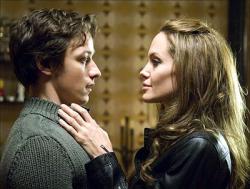 Wanted is a dark super hero movie in which the good guys do more killing than the bad. The "heroes" of the film are assassins who make preemptive kills on people who have yet to do something wrong. Think Minority Report only the precogs is a name-weaving loom.

Wesley (McAvoy) is an office lackey with a hot girlfriend. His problem is that he is a complete and utter wimp. He takes his bosses crap on a daily basis. His best friend is porking his girlfriend. Wesley is just too scared to do anything about any of it. Then one day he meets the beautiful, aptly named, Fox (Jolie). He bumps into her at a pharmacy. "I’m sorry." He says to her. "You apologize too much." She responds. "Well, sorry about that." he continues. His life will never be the same again.

What follows is an action packed sequence and his introduction into the assassins guild known as The Fraternity. Everyone there acts as if they are doing some greater good. The members all have the ability to shoot a bullet and make it curve around corners. "Within the fabric of this world, every life hangs by a thread. We are that thread - a fraternity of assassins with the weapons of fate." The guild master informs Wesley. The fraternity’s motto is, "Kill one-save a thousand."

The guild trains Wesley to kill the man who killed his father. This is that tedious part of the movie that is all about teaching and learning who he is and what he needs to do. We know he will become a member so this part really needed to be shortened up.

However, the movie pays off in spades with the action sequences. Some are exciting and tense, such as the train ride. Others are so over the top, like the car assassination scene, that you have to just except it or leave the theater.

Jolie is as hot as ever. Her attraction to "guy" movies has made her a very popular actress in male oriented films. McAvoy however, is just plain bland. Even after Wesley grows a pair and stands up for himself I never felt that little rush I should have felt for him. Perhaps it is that he is Scottish playing an American. Perhaps it is just his character. How could such a wuss ever get a hot girlfriend in the first place? No matter what, his character never rang true for me.

Even with the flaws, Wanted is still an exciting, dark piece of morally questionable escapism. 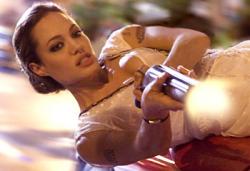 Wanted is completely implausible and utterly unrealistic and yet is a hell of a lot of fun. Sure, McAvoy isn't your standard action hero and sure he goes from zero to hero in way too short of time, but the action is fun and Angelina Jolie is hot as hell. What more do you need from a Summer action movie?

I also loved the movie's style. Russian director Timur Bekmambetov, has a flair for creating memorable imagery. I loved his Night Watch film and he brings that same visual style to this, his first big budget American film. Ordinary scenes are taken to the next level with his clever direction. I haven't seen such a distinctly visual style in an action film since The Matrix.

Eric, you seem distinctly distracted by Wesley's hot girlfriend. In a movie where the heroes can bend bullets around corners, the fact that the office drone has a hot girlfriend is the thing that you saw as least believable?