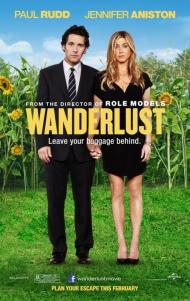 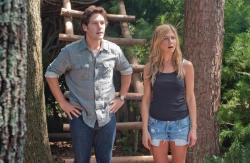 If January was the month when really bad movies were released then February seems to be the month when the blandly inoffensive movies are being put in theaters. Like Gone, also released this week, Wanderlust isn't a great movie by any means, but it's also not bad enough to really annoy. I wouldn't recommend paying for a movie ticket to see it, but if you catch it someday at home I am sure you'll agree that you've seen worse.

The one thing that Wanderlust doesn't do is reverse the course of Jennifer Aniston's lackluster movie career. I can only assume that she has a great many friends in Hollywood because I can't think of another reason why she keeps getting movie work. Every movie that she puts out seems to be a financial flop. She successfully played against type in a supporting part in last year's Horrible Bosses, but disappointingly has returned to her normal style of role here. This time around she's playing second fiddle to the reliably funny Paul Rudd and outshone in the laughs department by the supporting cast.

I feel as though I've been seeing the trailer for this movie for so long that everyone must be aware of it by now, but in case you're not, the plot is fairly simple. Rudd and Aniston play George and Linda, a New York City couple who must move out of the city after George loses his job. After a brief detour at George's obnoxious brother's house, they find themselves living in a hippy compound called the Elysian Fields. Let the fish out of water hijinks begin.

One aspect of the film that actually surprised me was that I assumed the hippies would be shown to be idyllic and wise. They would show the big city couple the error of their ways and inform them how to tune-in, turn-on and drop-out. Instead the movie actually shows the commune to be filled with hippy-dippys who are almost childlike in the behaviors and attitudes. It appeals to both George and Linda at first, seeming so much less stressful than real life. But how long can anyone stand to live in "paradise"?

Rudd is as likable and funny as always. He's got the best slow burn and dry delivery since Charles Grodin. Aniston is still likable but apart from one moment where she gets high, plays it mostly straight. The supporting cast generates much of the laughs.  Michaela Watkins is a scene-stealer as George's drunken sister in-law. Likewise Kathryn Hahn and Kerri Kenney as two of the hippy women generate some of the best laughs. Alan Alda, who should have been a slam dunk as far as generating laughs as the aging hippy founder of the commune, is under-used, almost as if the writers didn't really know what to do with him.

The ending feels a little neat and tidy. Without giving plot points away, I can just say that a problem arises between George and Linda concerning the commune's policy of free love. One member of the couple takes advantage of it and the other forgives it far too easily.

Despite being produced by Judd Apatow, the humor remains fairly tame. Some of the movie's funniest moments are when it pushes the limit. Rudd trying to psych himself up in the mirror with dirty talk is funny, although it goes on for too long. The full frontal nudist winemaker stampede is the film's most shocking scene and subsequently one of the funniest.

Although it has its charms, Wanderlust isn't anywhere near paradise. 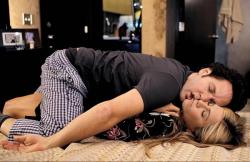 Wanderlust is a clash between capitalism and hippies.  Although New York and Rick represent the ugliness of capitalism and the hippies seem so giving, capitalism still comes out the clear winner.  As Scott wrote, the hippies are all childlike, or at least ignorant teenagers.

Like all arrogant people, these hippies think they see the world from some unique angle when in fact they are just naive.  At one point, Seth says they are not a commune because that implies hippies getting high around a campfire as someone plays a guitar.  The next scene features Seth and the other hippies doing all of those things.

It tries to make Rick out to be a hypocrite as well, but he just comes across as stupid. When his wife finally announces that she knows of her husband's affairs, he states, "I have sex with other women because I love you so much." He then tries to make puppy eyes at her, to which she asks, "What's that face your making.. Are you pooping?"

Some of the films funniest moments are when George conflicts or reacts to the hippies.  After George kills a fly, he gets hammered by the hippy chicks for being violent. The argument escalates to the point that he claims,"I support the troops."  To which one girl responds, "I can't even look at you right now."  When Seth and George get into a fight, the other hippies want to intervene but can do nothing but chant because they are pacifists.

Rudd as George, steals the movie.  As he is the straight man to everyone elses antics, he is usually present for the better jokes.  Linda is not a likable character.  Early on we learn that she is a bit flighty and her ideas are horrible.  At first she does not like the commune, then she loves it, then she hates it.  Rudd is not only the straight man but the only adult on screen.

Wanderlust creates some decent laughs and is well worth the watch.  Other than George, no one comes off well, be them a hippie or a successful business man.  The final message though, is that free time, free love and free drugs may be entertaining but nothing beats a great pay check from an easy job.