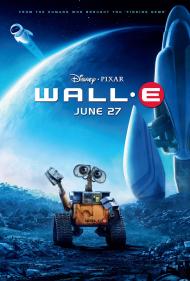 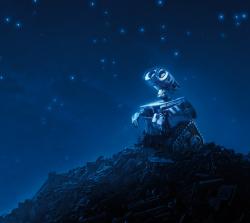 In the future, Earth becomes polluted as man’s greed to own more and more junk increased. The world now seems to have only one store left, Buy N Large. They are huge mega store that seem to be a mile long. The population of the Earth has long since left on a ship called AXIOM, with a program to return to Earth once life is again sustainable here. Left behind to clean up the mess are a bunch of robots called WALL Es. They are little trash compactors that make little blocks out of our trash and stack them neatly to resemble skyscrapers. How that is considered cleaning up is never explained.

As the movie starts, there is only one WALL E left. He harvests parts from the inoperable WALL Es to keep himself going. His only companion is a cockroach and he spends the first 20 minutes of the movie pining for companionship. This is usually done while he watches an ancient video tape of Hello Dolly. No Patrick, you never see Barbra Streisand.

A robot, EVE, from AXIOM shows up and WALL E falls in love. She is there to discover any signs of life. WALL E shows her a plant he found and before you know it they are zooming through space. Once on AXIOM, the movie goes from a romantic, robot comedy to an action adventure comedy.

On AXIOM, all of the humans are fat tubs of lard that spend all day in mobile chairs chatting on computer screens. In one scene a human gets knocked off his chair and needs robot assistance to get back in it. Gee, what a subtle social commentary.

The animation and imagination behind this film are more than adequate. However, WALL E and EVE are robots and thus their “love” story never connected with me, let alone made sense. Call me a cynic, but I do not care about a machines “desire” to hold hands with another machine. WALL E is cute but utterly hollow. Disney wants to humanize him and of course we can draw all kinds of symbolism from his loneliness, but the fact remains that he is a man made machine, not a man. 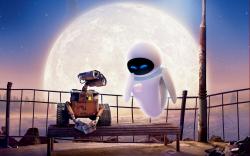 WALL-E and EVA in WALL-E.

Wow Eric, are you dead inside or something? This movie and its lead character (robot or no robot) have tons of heart. So much so that I don't see how anyone could not feel for this lonely little robot. This is hands down, one of the most enjoyable movies that I've seen in a very long time. It's got humor and emotion galore.

For me, the best part of this movie is the beginning when we see Wall-E living his lonely existence on Earth. I've always felt that the best jokes in movies are tinged with a little sadness and this is very true here. We see Wall-E going about his life, collecting interesting things as he ceaselessly goes about his job. His only friend is a cockroach. I don't understand how anyone couldn't help but feel for this little guy. And this opening part of the movie is done almost entirely without diologue This is as close as Hollywood has come to doing a silent movie in a very long time.

Even after he leaves the Earth I still enjoyed the movie. The little cleaning robot was hilarious as are many other elements of this movie.

About the only things that troubled me were one, the use of human actors in a couple of scenes and two, the fact that a movie condemning rampant consumerism should be made by Disney, when you can walk into any store in the world right now and buy about a bazillion pieces of Wall-E merchandise. The actors bothered me because I don't understand why they used them. Why didn't they animate them as well? Most of the humans are animated in fact, so that some humans are and some aren't, which makes it even more confusing. The consumerism message didn't so much bother me as it just seemed very ironic.

Those little quibbles aside, I fail to see how anyone could not enjoy this movie and feel something for little Wall-E. Unless your like Eric and apparently have a stone where your heart should be. 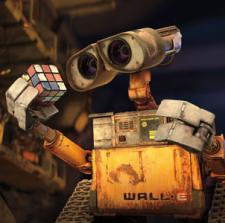 Wall-E and his Rubiks Cube.

I agree with Scott. I felt for WALL-E and his lonely existence. Sure he is a robot but he learns about love from watching human emotions displayed in the movie Hello Dolly!. After 700 years of virtual solitude his world is turned upside down by the EVE robot. The movie definitely loses some of its charm once they head off into outer space. The fact that 99.999999% of the human race obviously has died since there only seem to be a few thousand people on the spaceship is glossed over. As a movie WALL-E is original, creative, heartfelt and humorous. As a character Wall-E will steal your heart, that is if you possess one. If they had shown Barbra I would have given it four stars.