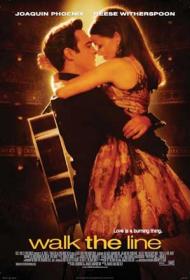 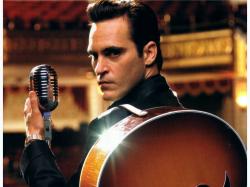 Joaquin Phoenix in Walk the Line.

I would like to here by declare a moratorium on bio-pics of music legends until Hollywood comes up with something new to say in them. Do we really need another movie about a small town singer who faces adversities growing up, finds music success, fails at an early marriage, becomes addicted to drugs, finds redemption through love and goes on into music immortality? It's the kind of story that has been beaten to death through countless movies and reruns of VH1's Behind the Music series. We've seen these types of stories so many times that it's hard to care anymore.

This time around it is country legend Johnny Cash's life that receives the big screen treatment, but despite high-caliber performances by Joaquin Phoenix and Reese Witherspoon as Johnny and his second wife June, the movie is so reminiscent of other bio-pics that even they can not rescue the story from a feeling of, "Been there, done that."

Like last year's Ray, Walk the Line opens with a traumatic event of the lead character's childhood. Also like Ray, the trauma is the death of a brother and that trauma haunts him for the rest of his life and the rest of the movie. The story then jumps ahead to Johnny's time in the Air Force where he starts writing songs. Following his time in the service, he returns home, marries his sweetheart and soon manages to land a recording contract that puts him on the road touring with the likes of Elvis Presley, Jerry Lee Lewis, and the true love of his life, June Carter (Witherspoon).

The movie then follows Cash's early success and his addiction to drugs. He spends time in jail following a drug arrest. It is his drug use and the fact that he's in love with June that eventually ends his marriage, but this opens the way for him to finally get together with June and began his rehabilitation. The movie's climax comes with his seminal concert inside Folsom Prison, from which he recorded a live album that went to become one his best selling ever.

Drugs are so often a recurring theme in musical lives that it's become such a cliché. If this was a fictional story of a singer's life, I wonder if a writer or director would even bother to include them. What is there to say that hasn't already been said? Drug addiction is bad and can destroy your career and your marriage. We get it already.

Perhaps if Ray hadn't come out last year and if their life stories weren't so similar, I might have enjoyed Walk the Line more. Unfortunately though, it did and they were. 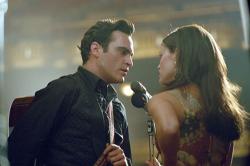 Joaquin Phoenix and Reese Witherspoon in Walk the Line.

Musicians and drugs: is there a way to separate them? Elvis, The Beatles, Jim Morrison, Ray Charles, Tina Turner and Johnny Cash all did them and they are but a few of the many. A drug using performer is such a tired cliche. I always find it hard to watch a movie about a famous, rich person who has such little mental stability that they feel the desire to do drugs. I just can't muster enough pity to empathize for them.

The other problem with all of these musical bios is that we, the audience, never fully understand why these people, who have so much, waste so much on drugs. Cash's big emotional problem, according to Walk the Line, is that he had Daddy issues. Is that why he did drugs? The movie explains it by someone handing them to him with the assurance that it's okay because Elvis does them to. Like Ray, the drug aspect acts as the movie's antagonist but never is a valid rationalization made for the drug use.

The best part of Walk the Line is the love story. Witherspoon and Phoenix have great chemistry as Cash and Carter courting each other. “Next time I ask you to marry me I'm gonna come up with a different way." Cash says to Carter, who replies, “Good cause I don't like reruns." Phoenix has Cash's on stage poise and his singing mannerisms down pat. Witherspoon is a delight as the singing, comic June Carter. Her best line in the movie is when she says to Cash, “You gotta hitch in your giddy-up?" 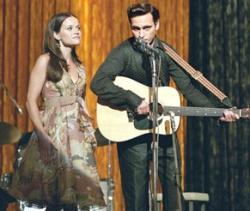 Reese Witherspoon and Joaquin Phoenix in Walk the Line.

OK, OK so this script is similar to other movies made about famous musicians. That would matter if this was a movie about a made-up singer, as it happens it's about a real one. Unlike my brothers I was able to see this movie on its own terms and as an individual product. In my opinion what separates this movie from Ray is that this is much more of a love story. It is June's story nearly as much as it is Johnny's.

Eric says he doesn't understand how a rich, famous person can do drugs. I can. Maybe I have more sympathy for human frailty, I don't know, but I understand how someone living the life of a big singing star could very easily fall into the downward spiral of an addiction, after all drugs provide an instant physical thrill that is difficult to convey onscreen and the life of a famous musician would provide such easy access. Eric goes on to say that these movies never explain the reason these artists use drugs. Again, I think that most people couldn't give a reason why they do drugs, other than it's fun and/or it's an escape. Drugs aren't that complicated or intellectual, they are an instant thrill that becomes an addiction; they aren't a problem until they become one. What's not to get?

That said, I agree that the performances are great. Very few actors could pull of the singing required for these roles. Joaquin doesn't sound that much like Johnny Cash, his speaking voice isn't nearly as deep for one thing, but he does manage to inhabit the character well. It is not as much of a dead-on impersonation as Jamie Foxx's Ray Charles.

Reese Witherspoon is delightful as June Carter. Very few roles call for singing, drama and comic ability. Reese makes like Streisand in Funny Girl and pulls off all three successfully however.

Despite the well-worn plot, and my brothers' reservations, Walk the Line is a very good movie.