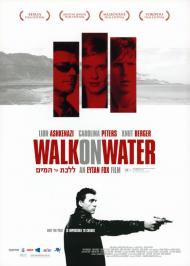 Walk on Water is a film that had me thinking about so much after watching it. It is full of political, social and sexual issues. I found a group about it on the net, but all they wanted to focus on was the sexuality of the leads. The film is about that, but also so much more.

Eyal is a Mossad agent. The movie opens with him assassinating an arab terrorist. After his mission, he finds that his wife has killed herself. His mental stability comes into question. His boss gives him a routine job of acting as a tour guide for a young German, Axel, whose grandfather was a key Nazi officer in charge a death camp. Eyal’s boss believes the grandfather is still alive and getting close to the German and his sister, Pia, who lives in a Kibbutz, will lead them to him.

Axel and Eyal are opposites. Eyal is emotionally shut off. Symbolically he has to put drops in his eyes as his tear ducts have dried up. Eyal is an outgoing homosexual. He is liberal and eager to learn new things. Early on, Axel asks Eyal if he ever wondered why the Arabs kill innocent Jews. Eyal, of course, has no sympathy for the terrorists. Later, while in Germany, Eyal defends some drag queen friends of Axels, from some skin heads. Afterwards, Axel says he wished Eyal had killed the skinheads. I guess Axel only feels sympathy for bad guys that do not directly effect him.

While acting as Axel’s guide, the two men develop a bond. They tell each other personal things and become friends. Here is where the gay debate comes in. They shower naked together ouside after going swimming. They discuss circumcised penises. On the way home Eyal uncomfortably translates a love song playing on the radio to Axel. Of course the nude scene with the two men and the subsequent dialogue has tons of homoerotic overtones, but sex is not what is at the core of their connection.

On top of Eyal’s and Axel’s friendship is the fact that Eyal ignores a female Mossad agents flirtation. Likewise Eyal seems completely uncomfortable around Pia, who clearly has an eye for him. Although some in the discussion group think that determines Eyal’s homosexuality, I think it has more to do with his fear of making an emotional connection with a woman after feeling guilty about his wife’s suicide. Also, after Axel picks up a guy for a one night stand, Eyal seems upset. You could say he was jealous if you see him as gay, or you could see him as bothered by that fact that the man Axel just spent time with is a Palestinian.

It would be a shame to dismiss Walk on Water as an Israeli Brokeback Mountain. Sure the campfire scene seems reminiscent, but this movie has depth. All of the main characters have several layers. Eyal is cold and lonely. He is macho and tough on the outside while wanting desperately to feel again. Axel is a free spirit who prides himself on his love of diversity, unless of course he disagrees with it. Pia is at first just a daffy girl but she has secrets. Eyal’s boss seems at first to give the assignment to Eyal for Eyal’s sake, but later we see that it was far more personal.

The title, Walk on Water refers to a scene in which Axel tries to walk on the water of the sea of Galilee. He explains that it can be done but first, “You need to completely purify yourself. Your heart needs to be like it's clean from the inside: no negativity, no bad thoughts.” That is a poetic way of saying what this movie is about. Before you can be a good person you have to get over the bad things in your life. Axel’s and Eyal’s friendship gives Eyal a new start on life, while Axel learns that some things in life need to be dealt with in harsh ways. 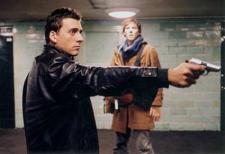 I kept getting distracted by how Lior Ashkenazi looked like a cross between Steve Carrell and Clive Owen.

I was very surprised Eric, to see that your review focused so heavily on Eyal's sexuality, as if it was in doubt at any point. Clearly he's straight, but it wouldn't matter if he wasn't. It wouldn't affect the movie either way, except perhaps for the epilogue, because that's not what this movie is about. An Israeli Brokeback Mountain? Anyone who would call it that has either never seen this movie or never seen Brokeback Mountain. Eyal's life is changed by Axel, but not because of anything sexual.

The parts of the movie that I found interesting were the parts that focused on the relationship of the Israelis and the Germans as cultures. As Axel points out, very few of the people who would have been soldiers during WWII are even still alive. And yet the feeling amongst Israelis and Jewish people around the world towards Germans is still very distrustful. I was discussing The Reader with a friend who happens to be Jewish and I commented that under the right circumstances, the Holocaust could have happened in any country; that the Germans weren't inherently more evil than any other nation, and she completely disagreed with me because of the way she still viewed Germans today.

You clearly enjoyed this movie more than I did Eric. I thought it was okay and I liked Lior Ashkenazi as Eyal, although I kept getting distracted by the fact that he looked like a cross between Steve Carrell and Clive Owen. It kept me interested until the end, but I can't say that it was such a deep movie as you seem to intimate. I mean, the assassin who tires of his job and finds redemption? That's been done many other times before.

It would have made for a more original movie if Eyal had turned out to be gay, and not just depressed over the suicide of his wife, and did end up running off with Axel to start a new life. That at least would have been a new twist.