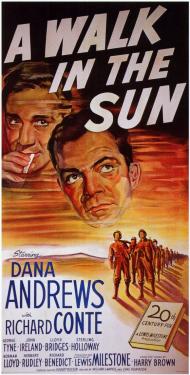 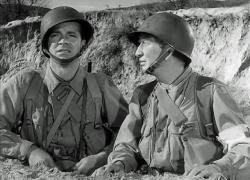 Dana Andrews and Sterling Holloway in A Walk in the Sun.

A Walk in the Sun is based on a novel and the first thing you will notice in watching this movie is that the writers of this movie and book loved dialogue. From start to finish no one stops yackking the entire film. Before the action, during the action and after the action someone is constantly talking.

The movie tells the story of a 1943 beach landing in Italy during World War II. It follows a platoon of American soldiers from the beach, through the Italian country side and finally to an assault on a German held farm house. Between all of the talking there are out breaks of fighting. Men constantly get killed and the wounded left behind. The movie takes the action very seriously. There are no Hollywood heroics. The entire point of this film is to show just so how average and normal these men are.

The movie accomplishes that through having the characters constantly talk to each other. They talk about their futures and pasts. They complain about the military. They talk about trivial matters, “I have all Bing Crosby's records except his new one." One soldier says. They joke, such as when one soldier says that someone is coming another says, “Maybe it's Marlene Dietrich. Does it have legs?" They refer to sex. A Sargent goes on about apples and how he would “like to be cuttin one open now and licking that juice off the knife." A nearby soldier says, “Cut it out sarge now you got me thinking of something juicy." A third soldier just giggles at the comment. They discuss politics. One soldier tells another one that he is, “a traveling salesman selling Democracy to the natives." They also speak very honestly. A couple of soldiers see, from a distance, some of their platoon get shot and killed. “I hope it ain't anybody I like." One of them says.

The cast is led by Dana Andrews. He is a good actor but had the unfortunate luck to never appear in a truly classic film. Also in the cast is Lloyd Bridges who went on to greater television and movie success. Sterling Holloway may not sound real familiar by name but I bet you have heard his voice many times. He went on to do the voice of Winnie The Pooh in the Walt Disney movies. Also in the cast is an actor names John Ireland. I have no idea who he is but the entire film I was struck but how much he looked like Jean-Claude Van Damme.

A Walk in the Sun is one of the best World War II movies to honestly depict how the soldiers probably acted. You see them scared. You see them worried. You see some of them fall apart under the stress. The only thing unrealistic is that they never show blood. They refer to gore and horrible wounds but it is never shown. The problem with A Walk in the Sun is that so much of the dialogue is superfluous. The dialogue needed some arc to it. It is mildly interesting to hear two soldier debate which is better; a photograph or a painting by Norman Rockwell, but it does nothing for the plot.

A song is sung, narratively, throughout several parts of the movie. It is meant to be inspiring but is just annoying. There is enough words spoken in this movie to have a song added. The only actual dialogue that seems to arc in the story is when John Ireland writes letters to his sister out loud. At the beginning of the movie he is with the rest of the platoon on a landing craft heading for the beach. He sarcastically says, “Dear Frances, I am writing you this letter relaxing on the deck of a luxury liner. On shore the natives have evidently just spotted us and are getting up a reception - fireworks, music and that sort of stuff. Ha. The musicians in our own band have also struck up a little tune. Ha ha" At the end of the movie he continues the sarcastic letter, “Dear Frances, we just blew a bridge and took a farmhouse. It was so easy... so terribly easy." His sarcasm is the best narration and they should have increased his part and edited some of the other pointless conversations.