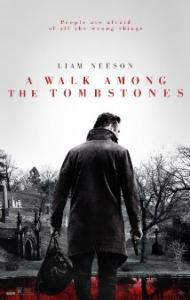 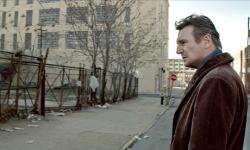 Liam Neeson in A Walk Among the Tombstones.

When there's a girl in danger on film, clearly Liam Neeson is the actor to turn to for help as once again we find him playing a man investigating a missing girl. He even has a scene where he spars with the kidnappers over the telephone. In an interview Neeson stated that he was reluctant to accept the role, in part because of that phone scene, telling the filmmakers that he had done it before. Eventually he was persuaded to take the role anyway and while there are certain similarities between this film and Neeson's past work, the tone of this movie is much darker and more serious than films like Taken.

Neeson plays Matt Scudder, the private investigator from the series of novels by Lawrence Block that extend back to 1976. Scudder had been portrayed on film once before, in 1986, by Jeff Bridges. There had been talk of reviving the character on film for many years. Harrison Ford was linked to the part 10 years ago, but the deal fell through and the project sat in development until finally Neeson was signed.

Although the novel was published in 1992, only the opening scene of the movie is set in that year. The rest takes place in 1999. When the movie opens, we see NYPD Officer Scudder kill three criminals who have just robbed a bar where he was drinking. During the shootout one of his shots went wild and killed a young girl. Cut to 7 years later and Scudder is now retired from the force and working as an unlicensed private eye. He's also sober, attending AA meetings, and still feeling guilty over the shooting. Neeson captures the aging, world weary detective with skill and is much more convincing in the main part of the movie than he is as the made up to look younger version in the flashback.

Through a friend at an AA meeting, Scudder is introduced to Kenny, a drug dealer whose wife was recently kidnapped, held for ransom, but then killed even after the ransom was paid. Kenny wants to hire Scudder to track down the kidnappers so that he can kill them. He doesn't wish to go to the police because he doesn't want attention drawn to his illegal activities. Scudder reluctantly takes on the job and soon learns that this wasn't a one off job and that it seems a pair of men have been kidnapping, torturing and killing women connected to drug dealers for several years. Eventually the daughter of a drug dealer is kidnapped and Scudder takes on the negotiations personally leading to the scene on the phone.

Writer/director Scott Frank maintains a dark, gloomy mood throughout the film. Being set in 1999, the Y2K bug is mentioned several times throughout the story and adds to the sense of impending doom. Most of the plot takes place in Brooklyn in the autumn, with grey skies draped over rundown buildings. It's this more serious gloom and more graphic depictions of violence that really separates this film from Neeson's other more outlandish parts. Those looking for another fast paced Taken, will be disappointed, but for those who enjoy a darker, moody film, there are things to enjoy about this one.

Apart from Neeson, the cast is mostly unknowns. They do fine work, but this is Neeson's film and he carries it, appearing in nearly every scene. He shares a fatherly chemistry with TJ (played by former X Factor contestant, Astro), a street kid he befriends who helps him on the case, in part by teaching him about 1999's modern technology. Astro's not the greatest actor, but he works well with Neeson. All of the other characters are fairly one note, including the villains who are sadistic monsters that we never learn much about.

With 17 novels in the Scudder series, there's plenty of room for a sequel. A Walk Among the Tombstones is actually the 10th book in the series so there's room for a prequel as well. While not a perfect film, there's enough good things about this one that I'd happily see a sequel should one get made.

Liam Neeson and Brian Bradley in A Walk Among the Tombstones

At first glance, this is a Taken type of film with Neeson trying to save a kidnapped girl, but as Scott noted, the pace is more methodical and the atmosphere much darker. The real difference though is with the characters morality. In Taken, it is never in doubt who the heroes are and who the villains are. Here, Matt gets hired by a drug trafficker to find his wife’s abductors. Although Matt is unhappy with that arrangement, he still gets involved in the case.

There lies the heart of the film. Like the grey gloomy setting, Matt and the victims are not painted in black and white. Matt is a recovering alcoholic with the guilt of having killed an innocent child when on the clock and intoxicated. His crime was covered up and he was even given a medal. Matt should have seen time behind bars but his connections covered it up.

Are we actually supposed to care what happens to the drug pushers, who are helping to destroy other people’s lives? You could argue that the girlfriend, wife and daughter are innocent victims but I will only agree on the daughter as she is a minor and has no say in what happens around her. The girlfriend is shown doing cocaine with her drug tafficker boyfriend. The wife obviously knew where her husband got his money. She also liked to flirt with her drug addict brother in-law by posing nude for portraits.

Besides the Russian drug dealer’s daughter, the only true victim is TJ. He is the product of a single mother who later abandoned him. At first glance, you are likely to dismiss TJ as just some random inner city kid, but he is so much more. He draws and reads. Name another teenager who can drop names like Sam Spade and Phillip Marlowe and know who they are? TJ is homeless but does not want Matt’s pity. He desires what everyone craves, acceptance and a purpose. We see how he needs Matt as a mentor/father figure but Matt keeps pushing him away. Their relationship is the only thing in the film I truly rooted for.

The abductors are sadistic on the level of Josef Mengele. They get a thrill scaring their victims by telling them what they are going to do with them, and then doing it. They are heartless beings that get off on torturing and dismembering others. One interesting scene had them return to their lair after one gets shot. He sits there bleeding; expecting the other to help him but the other is more interested in getting something to eat than providing first aid. I guess that is what happens when you team up with someone who treats pain and death like others treat breakfast conversation.

By the end of the film, we understand that the point of the film is not for Matt to save any particular victim but himself. Sure, we want that girl to come home safe and for Matt to foster parent TJ, but the real arc of the story is Matt redeeming himself for his past sins. I would definitely be interested in a sequel, following in the further adventures of Matt Scudder and Daunte Culpepper. They would probably make more sense than the Taken sequels. 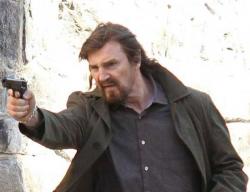 Liam Neeson made up to look younger in A Walk Among the Tombstones.

A Walk Among the Tombstones is a taut neo-noir thriller with a consistently moody atmosphere, a decent pace, and a solid cast led by the always reliable Liam Neeson. It's an insult to this movie to compare it to Taken however. Compared to Bryan Mills, Matt Scudder is a real person with depth and moral ambiguity. And although A Walk Among the Tombstones is still formulaic it maintains a level of gritty realism that is completely missing from movies like Taken (or the horrible Non-Stop from earlier this year).

As I watched this movie I kept wondering where I'd seen TJ before. Duh, I watched the season of X Factor featuring Astro. He was a finalist. He's a very smart, talented kid who wrote all of his own rap lyrics. He may not be the greatest actor in the world but he does fine work here. I think we'll be seeing more of him in the future. Like my brothers I found the relationship between TJ and Matt to be the heart of the story, and their scenes together are the most enjoyable.

Kenny is a very different role for Dan Stevens from his career making turn as Matthew Crawley on Downton Abby. He's lost quite a bit of weight in his transformation from British Lord to American drug dealer. Eric, yes drug dealers live off the addictions of others. They are certainly not upstanding citizens. But to suggest these characters got what they had coming to them is a bit heartless. These are some really sick bad guys. I wouldn't wish them on my worst enemies. I think from a story perspective they made the guy a drug dealer to demonstrate the sort of shady underworld Matt Scudder functions in since leaving the force and getting off the booze. And of course this leads to his ultimate redemption.

I'm with my brothers on this one. I would happily revisit these characters. Like Eric I hope TJ is in the next movie too, helping Matt adapt to the quickly evolving technology of the modern age. I agree with Scott that they tried too hard to make Neeson appear young in the scenes set in 1992 (see photo). In a mere seven years he looks like he aged 20. I guess his sin weighed that heavily upon him. Also like Scott, I enjoyed the look of the movie. It's a consistently gloomy New York City in those paranoid final days of the last millennium. A Walk Among the Tombstones makes for a memorable movie stroll.