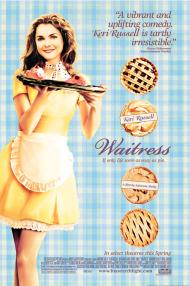 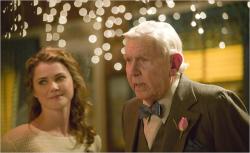 Waitress is the kind of movie that proves that you don't need big stars or high concepts to be great. It's a small movie set in a small town, and features actors who were most famous for parts on the small screen. And it also just happens to be one of the more entertaining movies of the year.

Keri Russell is charming as Jenna, a waitress at Joe's Diner in a small town. Unhappy in her marriage, she finds her only joy in making pies, which she names after events in her life, both real and imagined. There's I Hate My Husband Pie (bitter chocolate drowned in caramel), then Baby Screaming Its Head Off in the Middle of the Night and Ruining My Life Pie (cheesecake, brandied pecans, nutmeg), and finally Earl Murders Me Because I'm Having an Affair Pie (juicy crushed berries in a dark chocolate crust).

As you can see from the names of the pies, Jenna becomes pregnant by her husband Earl. Earl is perhaps the movie's weakest character. This is definitely a "You go girl" movie and Earl, the overbearing husband is a Hollywood caricature. He's so awful that it becomes impossible to see how they ever got together in the first place. The pregnancy puts a damper on Jenna's plans to leave Earl and enter a pie baking contest where she had hoped to win the $25,000 prize so that she could start a new life for herself.

When Jenna meets the town's new doctor; a young, attractive new male doctor (Fillion), she soon finds herself caught up in an affair with him. While the affair gives her some brief happiness, it does little to alleviate the overall downward spiral she finds herself caught in.

While all this female angst might sound depressing, the movie is presented with humor and filled with quirky characters. Andy Griffith has a small, but crucial part, as a grumpy old customer at the diner who befriends Jenna. Director Adrienne Shelly takes a small part for herself as the looking-for-love shy waitress Dawn and Cheryl Hines plays the other waitress at the diner, with a secret of her own.

Although the movie is small in concept, it delivers big heart and some big laughs mixed in with the pathos, but then some of the best comedies made are tinged with sadness. Often times, it's the sadness than gives comedies their heart and makes them more real.

Perhaps the saddest part of this movie is that this is the movie that was Adrienne Shelly's breakthrough movie and she died before she could enjoy her success. At least though, this movie will stand the test of time and so long as people watch it, she will be remembered. 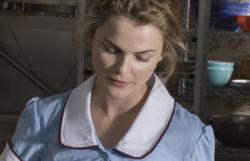 Waitress was written and directed by a woman, and it shows. Too often, chick flicks have a tendency to show all of the male characters as one dimensional and unlikable. They just play antagonists to poor, helpless, innocent women. The theme results in women are victims and men are the cause of all of their problems. Not since Mona Lisa Smile have I watched such male bashing.

In Waitress, Jenna is married to Earl who has no clue how to treat her with any amount of respect. Even though she agreed to marry him in the first place, the movie says it is not her fault because supposedly he changed after they got married. Earl obnoxiously honks his horn when he goes to pick her up and constantly tells her what to say. She goes along with all of it without ever telling him otherwise. To make sure the audience fully sees her as the victim, Shelly makes sure to include a scene where Earl slaps Jenna.

Within their marriage, Earl is as much a victim as Jenna. Sure, Earl is stupid, but he actually loves Jenna. He never hides who he is from her. He simply needs a stronger woman who could show him how to treat her better, as well as give some instructions in the bedroom. If Jenna can blame him for her unhappiness, why can't he blame her for his relationship ignorance? Jenna has an affair on Earl. She denies Earl sex and constantly lies to him. She deserves Earl as much as Earl deserves to be left by her.

I never felt the least amount of sympathy for Jenna. She mopes around as if all the world is crashing in on her. She hates her pregnancy and of course takes no responsibility for it. She blames Earl for getting her drunk to have sex with her. She made a series of decisions that put her where she is yet she thinks it is not her doing. How exactly is she the victim if she volunteered for all that has happened to her?

Earl isn’t the only male character that takes a hit. The married owner of the diner comes across as bossy and then has an affair with one of his married waitresses. The other waitress gets together with a real dork, who likes to make spontaneous poetry. Right in the middle of his wedding he stops the minister to announce he just came up with a poem and has to recite it just then. The doctor, Jenna is having an affair with, is also married. His character make little sense. When he first meets Jenna he acts as nervous as a 15 year old virgin about to make out for the first time. Griffith plays a rich, grumpy old man who ends up being Jenna’s benefactor.

The end of the film is supposed to be Jenna’s big emancipation, but she accomplices nothing on her own. The birth of their baby causes her to stand up to Earl. Her friends make the suggestion that she start her own place and Griffith's money allows her to do it. If Jenna is not to blame for any of her problems, then she likewise does not deserve all of the credit for her success.

The only thing I got out of Waitress was that some women really hate men, and I had a hankering for a piece of pie.