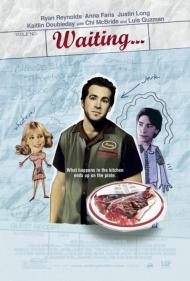 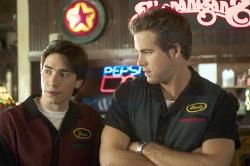 Waiting is a completely juvenile, ridiculous movie filled with frat boy humor that just happens to be very funny. It's definitely the kind of movie you have to be in the right mood for and being with the right audience will help as well. I saw this movie in a screening room filled with a bunch of other New York film critics, most of who barely seemed to chuckle, let alone laugh out loud. Now if you were to see this at a midnight showing in any college town, I'm sure the reaction would be far more exuberant.

There is no plot to the movie. The whole thing takes place over one day with most of the action taking place at a restaurant called Shenanigans. You can insert Applebee's or TGI Fridays or the generic restaurant chain of your choice and you'll get the idea of the type of place. Waiting wants to be to restaurant employees what Office Space was to anyone who's ever worked in an office. It's rather reminiscent of the teen comedies from the 80s, but without as much nudity.

Ryan Reynolds stars as Monty, the coolest guy at Shenanigans, but as a new employee points out to him, "So what? That's like being the smartest guy at a school for people with Down syndrome." His best friend and roommate, Dean (Justin Long), is more serious than Monty and is starting to ask the big questions about where his life is heading. Monty, meanwhile, is happy to lie back and enjoy his life, which probably peaked sometime in High School, which is where he still gets most of his dates.

While Long and Reynolds are the stars, several members of the supporting cast manage to steal their scenes. Alanna Ubach is terrific as Naomi, the angry waitress with the scary personal hair.

Some of the jokes do stretch on for too long. Far too much is made of The Game that the male employees play, wherein they each try to trick other employees into seeing their genitalia so that they can then kick the looker in the butt. But the jokes come fast enough so that even when they don't all land perfectly, you never have to wait too long for the next one.

Above all this movie will teach you one thing. Never, ever piss off the people who handle your food, and if you do, for god's sake never send the food back. If you're able to do that after watching this movie, you must have a much hardier stomach than I do. 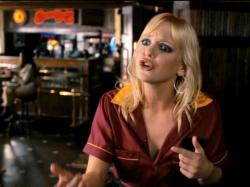 Waiting makes a very good point about people who work in the food service industry. I bet anyone who has ever worked in a food service position loved this movie, or at least fully understood the chgaracters. For anyone who has never worked in customer service you should watch this movie and learn a few things. Waiters are not servants. They smile but they really do not care. It is not a pleasure for them to serve you, they are doing it for a tip. As Scott wrote and the movie points out with this line from Reynold's after they contaminate a meal with human by-products, “I guess we should feel some sort of guilt, but she broke the cardinal rule; never fuck with people who handle your food."

Waiting is full of crude humor mostly having to do with sex or body parts, but hey this is a bunch of partying twenty somethings. What did you think they talked about? At one point a waitress flashes her dirty pubic hair at the rest of the wait staff. Calvin, the resident virgin, says, “Well its official, my penis is now just for show."

Ryan Reynolds was in this movie and The Amityville Horror last year. The lesson he should take from those two movies is that he needs to stick with comedy. His comic delivery is suited to such lines as “ If I remember correctly, wasn't I inside you?" And “How do you feel about frontal male nudity?" Drama, of any kind, is not his strong suit.

Waiting will having you laughing as well as wondering about your food the next time you dine out.