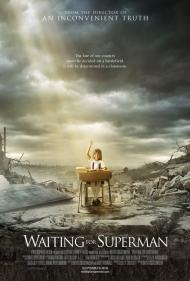 As a father of two children reaching the end of their public school lives, I found Waiting for Superman to be a frustrating watch.  I was not surprised by what it discloses but it angered me none-the-less.  It confirmed what we always knew to be true, that teachers, like everyone else in the workforce, are mostly just people earning a pay check, not the grand heroes of our time Hollywood so often depicts.

Waiting for Superman shows the utter failing of the educational system in the United States.  Such startling stats showing how we use to produce the brightest young minds, but have now slipped below many other countries are depressing to see.  Finland is currently number one.

It becomes frustrating when we see that since 1970 our children's grades have not improved in the least, yet every president since has poured more and more millions of dollars into education and have nothing to show for it.  Some Presidents have passed educational reform bills such as George Bush's No Child Left Behind.  Nothing has made a difference.

So what is the problem?  According to this movie it is the teacher's fault, or more accurately, the teacher's Union's fault.    In Waiting for Superman we see a video made by a student many years ago where he secretly video taped teachers doing absolutely nothing in their classes while students sat bored at their desks.  The teachers were immediately fired when the tape was made public.   Now here comes the real problem.  Because of the strength of the teacher's union, they were forced to rehire the lazy teachers.

In almost any job in the entire country, a person can be fired for failing at their job.  This includes the President of the United States.  However, once a teacher gets tenure, it is nearly impossible to fire them.  This film has someone try to explain the many hoops several people have to jump through to actually get a teacher fired.  It takes review after review after observation after observation after paperwork and more paper work, and all of that has a deadline or it has to start all over again.

I became angry when Waiting for Superman talked about how New York deals with it's lousy teachers.  They cannot fire them but they do not want them in a classroom either.  Instead, they pay them to do nothing.  Yes, that was a literal statement.  With a hidden camera they showed a room full of teachers sitting around what looked like a large break room.  They were reading, talking and basically just taking up time.   This is costing the state of New York millions of dollars and getting nothing for it.

The real telling moment of where the blame lies is revealed when a new superintendent for the Washington DC public school system proposed an offer.  If teachers gave up tenure they would get very lucrative raises based on their performance.  The teachers union would not even allow it to be put to a vote.

So how can the teacher's union get away with this you ask?  Well here is the answer.  According to Waiting for Superman, the two teachers unions give more political donations than any other organization in the country, 90% of which goes to the Democrat party.

The best summation in the entire film is when the DC superintendent says that she always thought it was about the students but now realizes it is actually about the adults.

Waiting for Superman is full of interesting information, but it is also padded with personal stories of parents trying to get their child into a particular school.  This puts a personal face on the problem, but as I have been living through this for the past 12 years, I was more impressed with the stats than the personal stories.  If you have a child in school or are at all curious about how corruption affects people, watch Waiting for Superman.