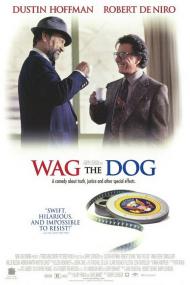 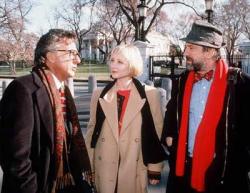 Hoffman, Heche and Deniro in Wag the Dog.

Wag the Dog is an insightful look at how the government and media can be manipulative by feeding a population whatever information they want.  With plenty of echoes of George Orwell's 1984, Wag the Dog demonstrates that information/propaganda is more powerful than any weapon.  It has lots to say about what can go on behind the political scenes, and suggests that we think twice about everything we hear from the news.

With less than two weeks before an election, a Firefly Girl (Girl Scout) comes forward with the story that The President of the United States took her into his private office and sexually assaulted her.   With this story comes the knowledge that the president will obviously not be re-elected.  Enter the smirking fixer (De Niro) who decides that the only possible way to get past this is to distract the voters with a war.

He drops a few lines to the press denying there is a new bomber.  "There is no B-3 bomber. I don't know how these rumors get started!"  He has a General sent to an emergency meeting.  He denies any knowledge of Albania having a nuclear program.  The sheep in the press immediately buy it all and the story of the possibility of war with Albania pushes the girl's story to the second page.

To create something big and fake the fixer and his assistant (Heche) turn to, where else, Hollywood.  A movie producer (Hoffman) decides to produce the war for them.   He calls in a creative team to market the war with merchandising, fads, theme songs and a fake clip of a girl escaping a war ravaged Albanian village with her cat.  Actually it is Kirsten Dunst running in front of a green screen with a bag of Tostitos.

Wag the Dog is funny from start to finish.  De Niro is great as the slicker than snot spin doctor lying to everyone around him.  Hoffman steals every scene with a relatable story for every problem they encounter.  "Fuck the world. Try a ten a.m. script meeting, coked to the gills, no sleep and you haven't even read the treatment."  Woody Harrelson is likewise good in a small role as a convict being made up to be a war hero.

As good as Wag the Dog is, it has not gained the recognition it deserved.  This has more to do what happened in real life than it does with the quality of the film.  The novel, "American Hero", by Larry Beinhart specifically names George H Bush as president and Desert Storm as the war in question.  The film never states the President's political party but Heche has this line that she screams at Hoffman, "What do we do now, liberal, affirmative action, shithead, peacenik commie fuck?"

The film makers may have intended this film to question the Bush administration but it backfired once the Monica Lewinsky scandal broke.  The details of Bill Clinton's and Lewinsky's sexual encounters, his subsequent lie and the impeachment proceedings dominated the news.  With his Presidential legacy threatened, Clinton ordered the bombing of a pharmaceutical plant in Sudan that was not producing nerve gas as was originally reported, and a terrorist training camp in Afghanistan, that turned out to be nothing more than some huts.  Clinton then had the United States military lead a NATO bombing campaign in Kosovo, which is not even a member of NATO, without getting the approval of the United Nations Security Council, something Democrats always insisted Bush get. The distraction worked as news coverage of the bombings pushed the Lewinsky story to the back of the papers.

Wag the Dog may forever be associated with Clinton as it demonstrates just how horribly realistic something ridiculous can actually be.   Even if Clinton's decisions were just wildly coincidental, it still demonstrates how the government and media can influence the population through information.  When this movie was released I am sure people thought how farfetched it all seemed.  After Lewinskygate and the subsequent war, it took on a whole new life. 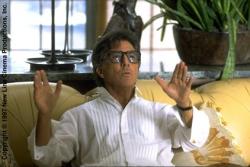 Eric, I agree with you that this is a very funny movie and that Dustin Hoffman steals every scene he appears in. However, I don't think it goes quite far enough in its satire. Having the spin doctors only fake the war instead of actually having one, undercuts the story by not making it believable enough. At times the movie pokes fun at modern technology, but it's that same modern technology that makes what they're doing impossible to pull off, even in 1997. Global communication would quickly disprove any claims that there was a war when there wasn't one. Were the writers afraid a real war couldn't be made funny enough?

The hints and denials of war are fine and I can believe the press would gobble them up, but the press would also immediately follow up these stories by sending reporters to Albania where they would quickly see that there is no war. This movie acts as if the press only gets its information from the government or takes what it is given without digging up any news on its own. And what about the cast and crew who make the fakes news footage featuring Kirsten Dunst? Are you telling me that none of them who saw the film they were making being used as real footage, told anyone? And what about the protesters to the war? Where are they? And, if, as it is hinted, the current administration is Conservative, then why is the Liberal Media backing him to the hilt? Wouldn't they be all over him about the Firefly girl and against his war?

Hoffman definitely gets the funniest part. Eric, you mentioned his best line, but he has many others. Every time a problem seems insurmountable, he comes up with something from his career that was harder. "During the filming of 'The Four Horsemen of the Apocalypse,' three of the horsemen died two weeks before the ending of principle photography. This is nothing, this is nothing." Reportedly he is based on famed Hollywood Producer Robert Evans, although Hoffman has never confirmed this, but the real Evans is said to have declared, "I'm magnificent in this film!"

While many of the ideas here are as current today as they were when this movie was made, the technology dates it. I remember seeing this in the theater and being suitably impressed when they are able to use a cell phone to contact the Press Secretary in the middle of a press conference and get him to say a line. Likewise, the use of CGI for Kirsten Dunst's scene was cutting edge at the time, but is just taken for granted now.

Perhaps it's because I'd seen this movie before that I focused on the unanswered questions during this viewing. I still enjoyed it this second time around, but because I knew what was going to happen, I found myself questioning things more. There are still some very funny parts and some great performances, but it's not quite as insightful as you imply Eric. It should have gone further. 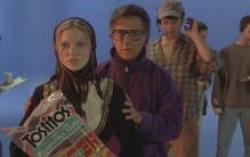 Kirsten Dunst and Dustin Hoffman in Wag the Dog.

Wag the Dog is a funny satire of the media and politics. In style, theme and pacing it reminded me of something Frank Capra would have done back in the 1930s. It has just enough reality in it to make its point, but is also quite far fetched in its execution. I’m not suggesting that personal scandals haven’t at times motivated the decisions of sitting presidents but the behind the scenes manipulations going on here are certainly exaggerated.

I get annoyed by the number of individuals I meet that don’t believe we ever went to the moon. They actually think the moon landing was filmed on a soundstage like the battle scene with Kirsten Dunst in this movie. Call me gullible if you like but I don’t believe for a second that a lie of this magnitude could be kept secret for long.

I agree with you Scott that the movie would have worked better if they had actually started a war in Albania, like William Randolph Hearst did with the Spanish American War more than a century ago. OK Hearst didn’t actually start that war but his articles against Spain certainly influenced the American public’s attitude in accepting the war.

The cast is uniformly great although I must join the chorus in singling out Hoffman for his gleeful, never-say-die movie producer. He certainly has Robert Evans’ hairstyle and over-sized ego down pat. In one scene he wants the President of the United States to wait on the phone while he finishes telling an anecdote from his career.

I enjoyed Willie Nelson. The scene where he leads a chorus of singers in a “We Are the World” type anthem hits the bull’s eye as does the forlorn blues song about a shoe. These scenes provide the movie with some of its sharpest satire.

Wag the Dog wants us to think that everything we see in the news has been altered or tampered with. I think that constant suspicion is just as naïve as innocently believing everything we are told. The truth lies somewhere in between.