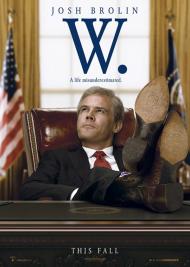 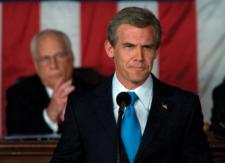 Josh Brolin as George W. Bush with Richard Dreyfuss as Dick Cheney in the background.

Oliver Stone's W. didn't make much of a splash when it was released last year. The timing was bad. After 8 years in the White House I don’t think anyone was all that interested in this president. And his conservative Republican base certainly had no interest in the liberal Stone’s point of view. I was never a supporter of our 43rd President but I also harbor no hard feelings towards him. I dislike any politician being demonized by members of the opposing party. I didn’t like it in the late ‘90’s when conservatives personally vilified Bill Clinton and I didn’t like it when liberals bashed Bush as an evil hatemonger. They were both flawed presidents but I believe that they both made decisions based on what they thought was right for the country.

Actually, although W. does show George W. Bush as not being the brightest bulb on the tree, this is a surprisingly sympathetic portrait. Dick Cheney and the senior Bush’s are given the most unflattering portrayals. Richard Dreyfuss has Cheney down pat, he comes across as the one pulling the puppet strings behind the scenes. George H. W. Bush is shown clearly favoring his son Jeb and looking on W. as the alcoholic ne’er do well of the family. Ellen Burstyn plays Barbara Bush as a crass domineering bitch.

The movie intersperses scenes from Bush’s first term, in the days building up to the invasion of Iraq, with key moments in his life before assuming the highest office in the land. The one point Stone seems to be making is that W. spent most of his adult life trying to earn the respect and approval of his father. The key players of Bush’s first term cabinet are all here, George Tenet, Karl Rove, Colin Powell, Donald Rumsfeld and Condoleezza Rice. Jeffrey Wright is the least convincing as Colin Powell, there is very little physical resemblance and he doesn’t have the voice down well. Thandie Newton is perfect as Condi Rice. She has less lines than the male members of the president’s cabinet but fits Condi’s look and mannerisms to a tee.

This movie really belongs to Josh Brolin. He is in nearly every scene and while he doesn’t bear much physical resemblance to Bush, the way he imitates his voice and nervous laugh is uncanny. A few direct quotes from press conferences adds to the realism. Bush saying he is “Misunderestimated” and being unable to answer a question about what mistakes he had made are both recreated. Like all biopics there are scenes created from the writers imagination. One scene shows a dream Bush has for example.

Still, I found myself liking George W. Bush, at least as he is portrayed here. He was an alcoholic loser that couldn’t hold down a job but gained the discipline and self control to become president. He also was loyal and didn’t stray from his beliefs. In my opinion both good qualities in a leader. Was he misguided? Oliver Stone certainly thinks he was, but in all honesty only history can reveal that answer. 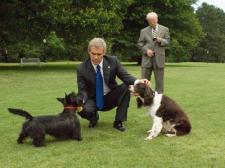 Bush spent time with his dogs, but not his daughters.

I was likewise surprised by this, somewhat, sympathetic portrait of George Walker Bush. He was born to a wealthy family. He had all the advantages of life anyone could ask for. He toasted his good luck with drinks and parties. Stone uses lots of celluloid showing W drinking, but he never gets under the skin of the President. Hell, he never even scratches the surface.

The movie starts with W pledging a college fraternity. It is nothing more than a cliche of rich white guys wallowing in arrogant excess. It is a scene imagined by Katie Moroski. It then follows W from one scene to another, each featuring him drinking some form of alcohol, as if that alone defines him.

The early part works hard at showing him as a fun loving, irresponsible embarrassment to his family. “Your not a Kennedy!” His dad barks at him when scolding him on his drinking. As soon as he decides to enter politics, while getting drunk at a poker game, the movie changes gears.

He meets Laura, loses an election, wins an election, becomes president and makes some incoherent speeches, “Fool me once, shame on you. Fool me... and won't get fooled again.” Whereas the first half of the movie is about his personal life, the second half is all about his cabinet members. His daughters never even make an appearance. Stone only allows us to view the decisive Bush, the mumbling Bush and the “I want my parents to love me” Bush. Stone never shows how anything happened. He just shows them.

I disagree with Patrick on Newton as Rice. Her portrayal and voice is more suitable to a Saturday Night Live parody. Wright plays Powell as a miserable bystander, embarrassed to even be in the same room as Cheney. “Well, I think you made a bigger boo-boo Colin. You could have been president.” Cheney says to Powell, who simply responds, “Fuck you.”

Patrick has long been in love with Brolin, while I am just now coming around to his talent. He is the best thing about this movie. Only in Brolin’s acting do we see any glimmer of a character. From flirting with Laura to trying to captain his cabinet, Brolin tries hard to show that there is more than one side to Bush. If only Stone was on the same page.

Instead of trying to make Bush a well rounded character, Stone spends too much time with flights of fancy. Several scenes feature Bush standing alone in a baseball stadium. Yes, Bush loves baseball and once was an owner of the Texas Rangers. Are the scenes supposed to mean that Bush lives in a fantasy world? Hell if I know. Instead of those meaningless parts, Stone should have showed Bush as a father and a leader, and less of a cliche. 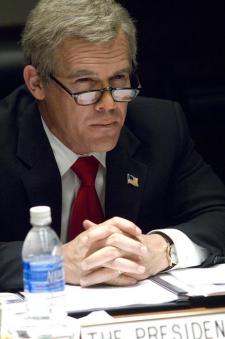 I was likewise surprised by this moderate depiction of George Dubya by Oliver Stone. With Stone's well known liberal leanings, I certainly expected him to portray the president as either totally evil or totally stupid. Instead he settles for merely showing him as a rather weak-minded individual with major daddy-issues.

Perhaps the biggest disappointment about this movie is how it provides absolutely no new insights into its subject matter; it just repeats well known stories about him. I rarely follow politics and am hardly a student of Bush, but even I knew every single story Stone tells.

And it's not even as if the stories are told in an original manner. If it weren't for the big names involved this could just as easily have been a made for TV movie. I mean Nixon's story was well known too, but Stone managed to tell it with a creativity that made it seem fresh and new.

The cast is quite good, especially Brolin. He captures the essence of Dubya without doing an outright impersonation. Cromwell is also quite good as Bush senior. I have to side with you Eric on the Thandie Newtown debate. I wanted to laugh every time she opened her mouth.

Several scenes, especially the discussion in the war room about why Iraq must be invaded, show clearly what Stone thinks of Bush as a president, but I actually think his overall decision to be so fair minded about the man makes for a duller movie than if he had gone on an all out attack against him. As it is, this is an okay movie that doesn't really bore, but doesn't exactly excite either.