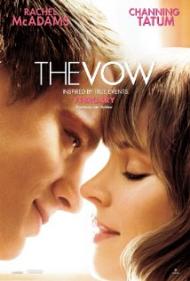 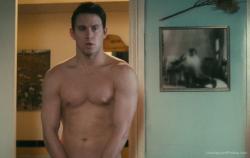 "Come on honey! You've gots to remember this? You called it the most exciting four inch trip you ever took!"

The Vow is a chick flick fantasy of the highest order. It has dopey romantic lines such as when McAdams says to Tatum, "You accepted me for who I am, and not for what you wanted me to be." to which Tatum responds, "I just wanted you to be happy. That's all." Speaking of Tatum, he does several shirtless scenes and a butt shot. If that does not make this a chick flick, nothing else possibly could.

Paige and Leo are one of those in love married movie couples. They have been together for a few years and have yet to have children, which partially explains their happiness. They get into a car accident while kissing, of course, and Paige ends up losing all memory of their time spent together. You are going to need some crackers and a whole lot of wine, or vodka, to get through all of this cheese.

After being released from the hospital, Paige moves back into their apartment even though Leo is basically a stranger to her. He tries to jog her memory with photos, music and a nude scene. Nothing works. I guess that means his penis is not very memorable.

The stress of her not knowing anything about their relationship causes too many problems, so Paige moves back in with her very rich parents whom Leo has, until the accident, never met. She conveniently remembers everything prior to Leo, so she fits right in with her parents, sister and her old boyfriend, who comes a calling. With another groan inducing line, Leo states to a friend, "I need to make my wife fall in love with me again." That kind of talk may make women moist, but as delivered by Tatum, I just yawned.

The plot soon reveals why Paige left her wealthy family and took up with Leo and his eclectic artist friends, but it is not nearly as dramatic as you might hope. The Vow is not a great drama, it is merely a valentine about love finding its way. Women may weep while men may groan as Paige says to Leo, "I hope that one day I can love you the way you love me." A confident Leo comes back with, "You figured it out once. You'll do it again."

This movie is almost worth laughing at but that would be giving it some amount of value. Rachel McAdams is absolutely adorable. Her face is shown in slow motion going through a car windshield. Yet later in the film, she only has some small easily hidden scars by her hairline. This chick knows how to face plant a car window. Tatum, as usual, is a mascot, I mean a miscast. Either one works. Leo is into music producing. All of his friends are art loving types who wear weird clothes. Tatum looks and sounds like Tatum. He by no means fits in with the odd crowd he hangs with. Well he clearly shaves all of his body hair. That is kind of odd, right?

The Vow is not for everyone. In  fact, I narrow its audience down to brain damaged  romantics. All others would be advised to watch anything else.