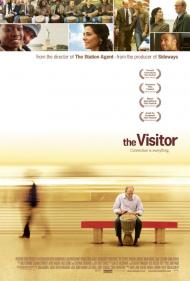 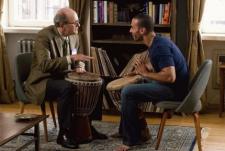 This movie is completely implausible.

Yet another boring ass movie that I watched merely because it was nominated for an Oscar. I mean seriously, since when did entertainment become a bad word in Hollywood? Why do so many awards seem to go to movies that bore the fuck out of me? Surely you can make a movie that entertains and has a message (if that's what you're into), can't you? And surely you can come up with a better script than this.

The Visitor features the single most implausible plot point of any movie I've seen in a long time. College Professor Walter Vale returns to his New York City Apartment from his house in Connecticut to discover two squatters, Tarek and Zainab, living there. Instead of calling the police as any normal human being would do, he asks them to stay with him. Of course, in this fantasy they turn out to be a lovely young couple with whom he quickly becomes bestest friends with. They are just the sweetest illegal immigrants you've ever met. He's a drummer and she sells handmade jewelry down in the Village.

Tarek, the young man, is arrested one day by those mean old New York Police Officers who actually put him in detention because he's in the country illegally. This is a obviously a fucking outrage! Those bastards. Didn't they give Tarek a personality test when they arrested him? Because if they had they would have seen he's a nice guy and therefore the law doesn't apply to him. Okay, seriously, Tarek is a nice guy and he's built up a life for himself in this country, but he still broke the law. Nobody wants to be in prison, but he can hardly say someone else is to blame.

Fortunately for Tarek, Professor Walter isn't just an accommodating roommate, he's also a saint. Live in my house illegally? That's okay, you've taught me to play the drum, so I'll pay for a lawyer, give your mother somewhere to stay. Hell, I even take her out for a night on the town and fall in love with her! Cause you see, that's what people are supposed to do according to his movie. When someone has illegally moved into your home, you're not supposed to get mad, you are supposed to accommodate them! Peace love dope, people, the 1960s were over almost 40 years ago!

Jenkins is a likable character actor. You might not know who he is by name, but I guarantee you that you've seen him in something and would recognize him if you saw him again. He does an okay job of acting. This isn't a part I would nominate anyone for, but to be honest it's more because of the writing than because of his performance.

Yet another movie I can heave a sigh of relief for having checked it off my 2008 Oscar list. 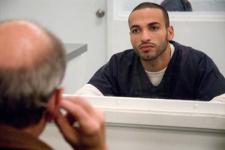 Just another illegal alien being mistreated by the evil United States.

The politics are certainly liberal biased. We live in a world in which Muslim extremists are killing innocent people around the world in the name of their religion. We live in a world where average, non-extremist Muslims do not speak out against those acts of violence and murder. In The Visitor, the nice and very likable Terak and his girlfriend are Muslims. Writer/DirectorThomas McCarthy could have chosen any Religion for the main characters, but he chose to make them Muslims. McCarthy includes a brief moment of Terak’s girlfriend having a friendly moment with an Israeli who sells stuff at a table next to her.

So Liberal is McCarthy, that he has said that he wants to do a movie about the guy who impregnated Sarah Palin’s daughter. On February 9th, 2009, Manny the Movie Guy reported him as saying, "This young man gets his girlfriend pregnant and ends up on the Republican platform at the National Convention. There's a dark comedy there somewhere. He was like a deer in the headlights."

Besides being an example of liberal politics, this movie has little to offer. An old widower is bored and lonely until he rediscovers his life. This movie uses music to symbolize it. Why Terak likes him is never stated. Walter is a complete bore. Terak takes time to show him how to play the drums and give him a social life. Terak doing those things to have a place to live would make sense, but McCarthy writes Terak as the kindest person in the world, as if it is up to McCarthy to help show another side to Muslims.