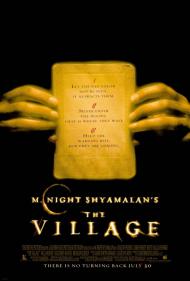 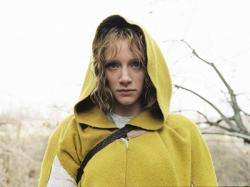 Bryce Dallas Howard in The Village.

The Village is M. Night Shyamalan's best work since The Sixth Sense. It's tense, fast paced, well acted, and – of course – features one of his patented twist endings. And, despite the fact that the twist isn't quite so surprising this time, it doesn't harm the overall entertainment of this movie.

Set in the country village of Covington, Pennsylvania in an unspecified year, but judging by the clothes and rustic lifestyle, is sometime in the 1800s, The Village tells the story of a group of people who live in fear of the creatures who are not named. The villagers and the creatures have an uneasy truce. The creatures will not enter the village, so long as the villagers will not leave their tranquil valley. However, when Lucius Hunt (Phoenix) briefly enters the woods, the truce appears to be broken.

With this simple plot, built upon the mystery of the forest creatures, Shyamalan slowly brings the tension to the boiling point. Along the way, there are several plot twists and jump in your seat moments.

In an impressive cast – featuring such thespian heavyweights as Sigourney Weaver and William Hurt – the standouts are its two leads, Joaquin Phoenix and newcomer Bryce Dallas Howard. Together they ground this fairy tale in reality. Howard is particularly outstanding as the blind, Ivy. Adrien Brody also does good work in a role very different from his Oscar winning turn in The Pianist.

Despite the stellar cast, like all of his films, it is Shyamalan who is the star. He sets an eerie mood at the start that just increases as the movie goes on. Although the ending isn't as surprising as The Sixth Sense's Bruce-Willis-is-a-ghost ending, nor is it as shocking, it manages to satisfy, and there's at least one moment in the middle of the film that does come as a complete shock.

I do think for Shyamalan's next film, he should leave out the twist ending. He's a strong enough filmmaker that he no longer needs a gimmick or a shtick to make a good film. It's also becoming harder for him to fool his audience. If this was his first film, I don't think I would have guessed where this movie was headed, simply because I wouldn't have been looking for a twist. Besides, a Shyamalan movie without a twist could be the best twist of all. 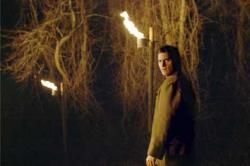 Joaquin Phoenix in The Village.

Please note that for the sake of discussing this movie, I am going to reveal some plot points. Stop reading if you do not want the secret revealed. The lesson in this film is that these people chose to seclude themselves from the rest of the world because of violence and fear. The world they created has violence, death and lots of fear. So, the point of this movie is that you can run from your fears but they will always be with you until you face them. Lucius faces his fears by going into the woods. Ivy faces her fears by going to get medicine. Her father faces his fears by letting her go. The twist ending is interesting but hardly the point of the movie.

With that said, I have to write wow! As in, Wow, Joaquin Phoenix is a great actor! He plays a confused young man of limited mental capacity. He is in love but struggles to communicate his feelings. My favorite piece of dialogue is when Ivy asks Lucius; "Why don't you ever speak what is in your head?" Lucius answers; "Why do you never stop speaking what's in yours?"

Phoenix has deep-set eyes that are extremely expressive. He has a brief scene in the church where he confesses that it was he who went into the woods. He has no lines, yet you can read the shame and guilt on his face as if he had spoken a page of dialogue. Phoenix is truly an awesome actor.

To me, this movie is without fault. The problem is the horrible previews and publicity. This movie is not a horror film, as the commercials would have you believe. It is a love story of the highest order. The people of this village go to extreme lengths to do what's right for the people they love. 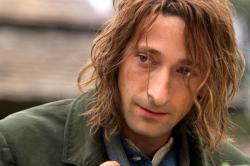 Adrien Brody in The Village.

Shyamalan continues to be my favorite director working in Hollywood today. Every one of his movies utilizes old-fashioned storytelling and window dressing while managing to seem fresh and new. Like Hitchcock and all the truly great directors, he takes you into a different world that is always interesting and often surprising.

With his gifts for writing original stories, hiring talented thespians, and bringing together all the disparate elements that go into making a great movie, it is easy to overlook a few minor plot-holes. Only because I am such a fan will I mention a few nitpicking observations. Maybe Scott didn't notice this but in the very first scene there is a clearly marked gravestone that sets the year as 1897. Shyamalan wants to ensure his illusion, but it's an unnecessary detail that seems a bit extreme in hindsight. Also the lack of a single noncaucasian resident of The Village may be historically accurate but doesn't seem believable given the true context.

These very insignificant complaints aside, I thoroughly enjoyed The Village and highly recommend it. I think Eric did a great job of summing up the theme. It is all about learning to face your fears. Suspense, romance, adventure and a valuable life lesson in the guise of great entertainment is not a bad way to spend a few hours.