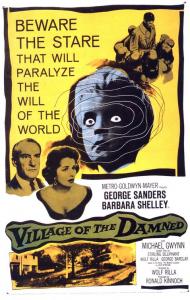 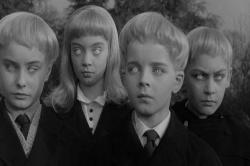 Some very scary children in Village of the Damned.

Village of the Damned is a nearly perfect horror film. It runs a mere 77 minutes but packs in plenty of plot and lots of scares. It begins mysteriously. One day in the quaint English village of Midwich every man, woman, child, and animal falls unconscious at the exact same time. Anyone that crosses over the village line likewise passes out. The military arrives and cordons off Midwich. An airplane pilot that flies too low over the village passes out and crashes his plane. Then just as suddenly as they fainted, every living thing in Midwich regains consciousness.

A few months later every woman of childbearing age is discovered to be pregnant. This causes much controversy and finger pointing accusations. But things only get more strange from here. The fetuses develop at an abnormally fast rate and all of the women give birth on the same day. The newborns all bear a striking similarity in appearance. They all have very blond hair and pale complexions with odd looking fingernails and vacant eyes.

The children continue to grow at an alarming rate. At three they are the size of normal ten or eleven year old children. They also exhibit strange telepathic abilities. They can communicate with each other at long distances apart and when one of them learns something the others all know it instantly.

When several villagers turn up dead in strange accidents it doesn't take long before the children are suspected of being something sinister. All of which leads to the famous final scene where star George Sanders faces off against a classroom full of these bizarre offspring. I won't spoil it by giving away the details but it is a classic screen moment.

The most famous image from this movie is the way the children's eyes glow whenever they use their telepathic powers to control others. This memorably chilling effect was created by placing the negative image of their eyes over their pupils. Add in the eerie sound effect and you have a simple yet very scary image (see photo).

Village of the Damned is a perfect Halloween movie. It tells a fast-paced story filled with mysterious happenings and gruesome frights. The children - led by 11 year old Martin Stephens - are perfectly scary as these emotionless, soulless offspring. The final scene is one of the all-time best endings to any horror film. 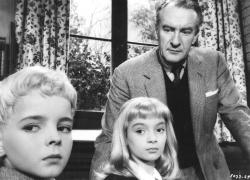 George Sanders and the mysteryious children of Village of the Damned.

Patrick, you did too good a job selling this movie. You set my expectations too high. The truth is that this is just a fairly entertaining little science fiction/horror movie. The children are creepy enough, but not particularly scary.

The title is very misleading. It implies something satanic, but really this falls more into the science fiction genre than it does horror. The plot is more reminiscent of an episode of Twilight Zone or Doctor Who than it is a Stephen King novel. I would never describe this as the perfect Halloween movie.

Having said all that though, I was still entertained. It has an intriguing setup that draws you in almost immediately. I wanted to know who these children were and where they came from.

Set in England just 15 years after World War II, I wonder if the blonde Aryan look of the children was a coincidence. Were they made to look like proper little Nazi youths on purpose? Director Wolf Rilla was German, of Jewish descent. His family moved to London when Hitler came to power. This seems to reinforce my idea of why the children look the way they looked.

The glowing eyes is a simple, yet effective visual trick. The humming sound that accompanies them is more annoying. Reportedly the glowing eyes were deemed too frightening for the original release in England and didn't appear until the movie was released in the United States.

Because of the time period, the issue of pregnancy is handled very delicately, with the word pregnant never even spoken. The discussion of a “virgin birth” is likewise sidestepped and the emotional trauma of the mothers is mostly avoided.

This is an intriguing and briskly entertaining little movie. It's not quite the horror classic that Patrick has made it out to be, but it's definitely worth watching. 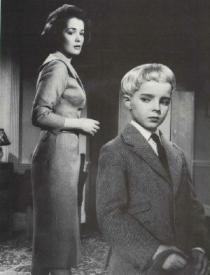 Barbara Shelley and Martin Stephens in Village of the Damned

Scott took the words right out of my mouth. As I was watching this, I kept expecting the Tardis to appear and The Doctor to step out and deal with this situation. Instead, we get the very capable George Sanders in the form of a determined teacher.

Sanders had one of those voices that is instantly identifiable. For me this is due to the fact that I heard his voice as a child. He is the voice of Shere Kahn in Disney's The Jungle Book and he played Mr Freeze on the Adam West "Batman" television show.

Although Sanders is the biggest international name in the cast, many of the others were famous in their own right. Patrick mention Martin Stephens being well cast as the leader of the Aryan looking children. Stephens was a very popular child star, for a brief amount of time, in England. From 1958 to 1961 he worked on 12 British movies and made appearances on television. He made two films as a teenager but left the movie business, went to college and became an architect.

The attractive Barbara Shelley, who plays Sanders wife, started in Italian films before becoming an early queen of the "B" British horror films, starring in such "classics" as Cat Girl (1957) and Blood of the Vampire (1958). Village of the Damned is clearly her biggest success. She never gained great international fame, but continued to act mostly on British and American television for the next three decades.

Village of the Damned is a concisely written and produced little science fiction film. It has limited special effects, but as Scott wrote, it immediately draws you in and you want very much to know what is going on. Definitely worth a watch.