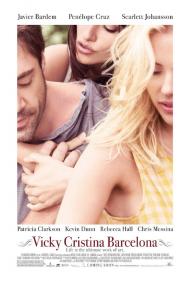 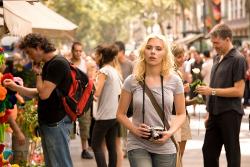 College friends Vicky (Hall) and Cristina (Johansson) spend a summer in Spain where they meet Juan Antonio (Bardem), a charismatic artist who invites them to spend the weekend with him. Vicky is engaged to be married and is practical and level-headed. Cristina is a free spirit. She doesn't have a clue what she wants from love, she only knows what she doesn't want. They both find themselves involved with the dashing painter. His tempestuous ex-wife Maria Elena (Cruz) shows up and complicates things further.

Allen takes advantage of the incredibly romantic setting of Barcelona and other Spanish cities. He makes cinematic love to them much as he has with New York so many times in the past, (there is only one brief shot of New York City when Vicky is on the phone with her fiance he is standing at the South Street Seaport). This exotic locale, plus the fact that some of the dialogue between Bardem and Cruz is in Spanish, makes the script seem fresher than the dialogue in many of Allen's recent films. Especially when giving voice to younger characters his speech patterns and vocabulary can seem archaic. Not this time however.

Apart from the traditional white-on-black titles set to instrumental music, it is easy to tell this is a Woody Allen movie within the first ten minutes. He doesn't appear in the movie at all and uses another actor for the voice-over narration. Still his style is so unique and familiar that there is no doubt whose movie you are watching.

The cast all do a good job. Although I am still not a huge fan of Johansson as a comic actress, she has improved her timing and line delivery. Bardem plays the part of a passionate, womanizing artist to perfection. The story is definitely told from the women's point of view however and what his character is thinking is left to our imagination most of the time. Cruz steals the movie! She is truly the modern day Sophia Loren. She handles drama and comedy equally well and has the funniest lines.

Woody has given us a beautifully shot, sexy summer romance with plenty of laughs and more than a hint of the bittersweet. Vicky Cristina Barcelona proves the old guy still has it. 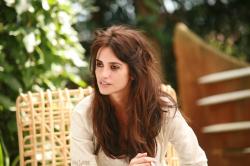 I only hope that whatever Woody has, it isn't catching. As for the plenty of laughs, I somehow missed them. There are a few chuckles, sure, but I can't say I found this to be a great comedy or anything. I'm not even sure it was intended to be. Maybe though, the laughter was just too embarrassed to come out while Woody was having cinematic sex with the scenery!

The one thing I do agree on with you Patrick is that Cruz is the best thing in the movie. I didn't like her character any more than I liked any other character in this movie, but at least she was entertaining and unpredictable. And as usual with her, she performs better when allowed to speak her native Spanish.

And that was my biggest problem with this movie. I didn't care about any of these poor little rich people or their 'problems' and their many, many flaws.

To a certain extent, this movie is a departure for Allen. It's not an outright comedy and yet it's certainly not a heavy drama. Speaking personally, I wish he'd picked either one or the other and ran with it instead of just coming out with this hybrid that never really succeeded as either for me. Or alternately, he could have gone for an R or NC-17 rating and really steamed up the sex scenes. That would have worked too. 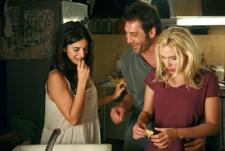 Until I read your review Patrick, I had no idea that this was a comedy. I never laughed, but I liked the characters, and found the message quite fascinating.

Allen is very bluntly saying that there is love and there is passion, but the two do not always go together. Vicky is in love with Doug, who is in the Woody Allen role, but she does not feel the passion with him that she felt with Juan. The most interesting scene with Doug is the one after they make love for the first time in Spain, and Doug comments to Vicky that she was really into it. Apparently Doug loves Vicky but does not always experience lots of passion from her either.

Cristina like wise discovers passion with Juan. She eventually starts having sex with both Juan and Maria. I agree with Scott on this one, it was very clear what Juan had on his mind from the moment he opened his mouth. Cristina also learns that passion is not only physical. Juan and Maria help release her passion for photography.

Juan and Maria have more passion and friction than any on screen couple I have seen in a very long time. However, that much passion coming from two different people is very combustible. No doubt these two had some great sex together, but they can hardly speak to each other with out fighting. “We are meant for each other and not meant for each other. It's a contradiction.” Juan explains.

Allen is saying here that passion can make for great sex and fun, but it alone does not make for a lifetime commitment. It also says that romance is allusive, and once you have it, it is no longer romantic. As Juan said, “Maria Elena used to say that only unfulfilled love can be romantic.” He also says that, “love is transient.” In this movie anyway, passion is either fleeting or dangerous, and a lifetime commitment is a bore. What a sad commentary on the state of relationships.