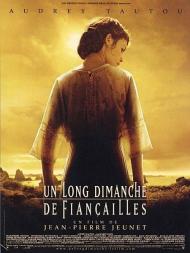 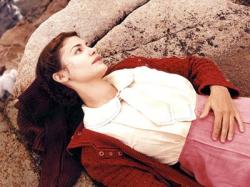 A Very Long Engagement reunites Amelie director, Jean-Pierre and it's star Audrey Tautou. This time around, the comedy takes a back seat to the drama. The subject is heavier than in Amelie but it allows Tautou to show more depth.

Mathilde's fiancé, Menech, is reported as having died in the trenches during World War I. She does not believe the report and begins investigating his "death". She interviews people who may know something about his last few days. One is a widow played by Jodie Foster showing off how well she speaks French.

Mathilde plays a game with herself the entire movie. To maintain hope that her fiance is still alive she creates determinations such as when she is peeling an apple she says, "If I don't break the peel, Menech is alive." The most dramatic such determination comes as a flashback when Mathilde says goodbye to Menech as he is first going off to war. She races across a field saying that if she can get to the road before the car goes around the bend then Menech will come back from the war alive.

Although the movie is more dramatic than Amelie, it still has some humor. Whenever her dog breaks wind, an old woman says, "Doggie farts gladdens the heart." At another point Mathilde is interviewing a female assassin who is about to be executed. "Do you regret anything?" Mathilde asks. "My hair." the woman responds.

I will not give away the ending, but I did find it slightly unsatisfying. However, the journey is as important as the destination. Not as great a film as Amelie, but just as beautifully shot. Tautou's screen presence is astonishing. I can't wait to see her next year with Tom Hanks in The Davinci Code.