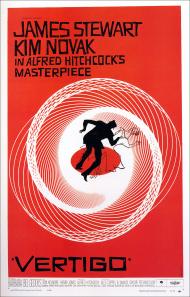 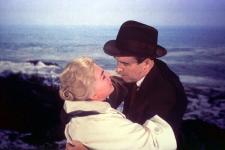 According to Hollywood, San Francisco seems to be populated almost solely by blonde femme fatales and detectives. It seems like every movie set there features one, the other, or more commonly, both. Vertigo is Hitchcock's entry into the genre. An entry that I found to be disappointing especially since it seems to be so highly regarded and often considered one of his masterpieces.

Hitchcock stalwart, Jimmy Stewart plays police detective John Ferguson. Ferguson suffers from a fear of heights and because of this fear he has retired from the police and ends up accepting an assignment from an old friend of his to follow the friend's wife around. His friend believes that his wife; Madeleine (Novak), is possessed by the spirit of her great-grandmother and that she is contemplating suicide. After Ferguson ends up saving Madeleine's life he finds himself falling in love with her and she seems to be falling for him. But this is a Hitchcock film and so things aren't what they seem.

Because of Mel Brooks' High Anxiety, I felt as though I'd seen parts of this movie before. The scenes in the tower on the spiral staircase seemed particularly familiar. Likewise Brooks managed to capture the melodrama so inherent in Hitchcock's work, including the tense and haunting soundtrack.

Like all of Hitchcock's films, there are some good things about this movie. The opening third of the film when you're still not sure what's going on and why Madeleine is behaving as she is, is the best part of the movie. Good use, especially for the time, is made of San Francisco as a location with Ferguson tailing Madeleine all over town. Hitchcock wasn't called the master of suspense for nothing and he manages to build it well often in long scenes without dialogue.

Once the story begins to resolve itself it weakens sharply. The big twist to the story happen about two-thirds of the way in and the last third is the weakest part. It's not very believable or entertaining. It tries to be a psychological thriller, but the psychology is dated (at one point Ferguson is diagnosed with suffering from melancholy as a disease) and the thrills suffer from that.

The love story is also pretty flimsy. Ferguson's love for Madeleine is old fashioned movie love where two characters fall instantly in love with each other for no concrete reason. Well, no other reason than she looks like Kim Novak anyway. Because his motives for loving her are so weak, his behavior in the last third of the movie didn't provoke any emotional response from me apart from mild bewilderment.

Technically the film is well made, although some elements seem quite dated now, I'm sure they were innovative for the time. The infamous vertigo dolly shot (pulling the camera away while zooming in at the same time) is used to good effect. Ferguson's fevered dream seems quite silly now though, with the animation and his hair waving.

Film buffs and historians may find this an interesting and well made movie, but for sheer entertainment value, there are a plethora of better Hitchock movies available.

Kim Novak does not have It.

The extras on the DVD have folks going on and on about what a classic this film is. They call it one of the greatest movies ever made. Are they kidding?

The entire movie hinges on two plot twists. The first is Kim Novak's secret, and the second is just what Stewart does, or does not, know about Judy. As Scott wrote, the truth comes out too early in the film, leaving the rest of the movie to drag on to an inevitable conclusion.

Kim Novak has all the right body parts and looks, but she has absolutely no charm. I do not get her appeal. She is pretty blank as an actress and she plays a fairly dull character, especially during the first 2/3 of the movie.

The entire film hinges on Madeleine and John falling in love. She acts crazy, while he is such a pussy he can't even stand on a step stool without passing out. John has a beautiful, good natured girl "friend" who obviously wants more from him, but all he can think about is a bland whack job with suicidal tendencies. Although the mystery kept me watching, I never cared what happened to either lead.

From the famous Saul Bass opening titles to the final shot of Jimmy Stewart staring down from that Spanish style church tower Vertigo casts a spellbinding aura of intrigue. The pacing is methodical but it is beautifully shot and, as Scott mentioned, it makes great use of San Francisco, which is like a third character in this twisted love story.

Stewart carries the movie on his shoulders. John “Scottie” Ferguson is one psychologically messed up man. From the very beginning he is dealing with mental issues. Scott, the movie uses the archaic term “melancholy” but he clearly suffered a nervous breakdown after Madeleine’s “suicide” and, in today's parlance, is clearly clinically depressed.

I bought John’s intense love for Madeleine. First of all she is extremely attractive and a complete mystery. And since he retired from the police force due to his fragile state of mind she becomes his full time job. Sounds like a recipe for obsession to me. Stewart falls so hard in fact that he begins an affair with his old friend’s wife. John is no saint. This is one of Stewart’s most morally ambiguous roles.

I disagree with you Eric. Kim Novak is great in this part. SPOILER ALERT: The first time I saw it I really thought Judy was a different person. Novak gives them each a distinct personality including very different body language and speaking voices. Judy is common while Madeleine had class.

The one thing about Vertigo that has always bugged me is the fact that while Judy has to pay for her complicity in the real Madeleine’s demise, husband Gavin gets away with murder (literally). In this case, Eric and Scott, you are both off. Vertigo is a masterpiece of psychological brilliance and deservedly ranks as one of Hitchcock’s very best films.