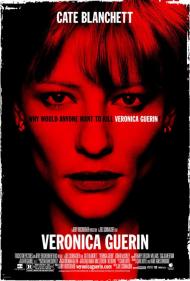 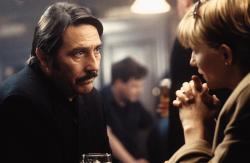 Veronica Guerin was a remarkable woman. This film version of the last few dramatic years of her life does a good job of showing that. Producer Jerry Bruckheimer (The Rock, Armageddon, Gone in 60 Seconds) and director Joel Schumacher (St. Elmo's Fire, Batman Forever, Phone Booth), tell a restrained story, almost completely free of melo-drama, that details the events that led to the murder of Veronica Guerin; a reporter for Ireland's 'The Sunday Independent' in 1996.

Cate Blanchett stars as the doomed reporter whose death gave birth to a movement that helped reign in the rampant drug trafficking that plagued Ireland during the 1990s. As we've come to expect of her, Cate's assumed accent is flawless, and so is the rest of her performance. She convincingly plays a driven woman, dedicated to her work and family. It is another award worthy performance by the beautiful Australian.

The pacing for this movie is quite swift, which keeps the action moving, but at times, seems to leave some questions unanswered. The story begins at its end, on the infamous day when Guerin was shot while sitting in her car at a stop light, and then flashes back to the events that led up to that moment. It shows how her investigations into the criminal world of Dublin led her deep into that seedy world, bringing her into contact with those who would eventually cause her death. Yet, we rarely get to see below the surface and into Veronica's mind to see what motivated her in this pursuit. It doesn't lessen the entertainment value of this movie, but when you see what an incredibly gutsy woman she was, you can't help but want to know more about what made her tick.

Apart from Blanchett, the entire cast of the movie is made up of mostly unknown Irish actors (unknown in America anyway), with the exception of a small and unnecessary cameo by a not so unknown Colin Farrell. Together they make up the colorful group of characters who filled Veronica's life, from the criminals she dealt with on a daily basis, to her friends in the Police force, her family, fellow journalists, and even the politicians she began to know as her stories of Dublin's underworld caused her fame to grow.

Veronica's investigations were done mainly on the streets, pubs, and brothels in Dublin's seedier district. She made the acquaintance of several mobsters, but John Traynor in particlur. Vain and greedy for publicity, Traynor boasted of stories of the underworld to Guerin, which she used in her articles, but also at times attempted to use her for his own ends by planting misinformaton about his rivals. It was Traynor's boastings that helped lead Veronica to Traynor's Boss, the man behind the scenes; John Gilligan.

As her stories in 'The Sunday Independent' started to become more specific and revealing in the truth about the master criminal in the Dublin underworld, the danger to Veronica's life began to grow. In 1995, she was shot in the leg when she opened her front door. The warning failed to slow her investigations, only spurring her on even more and further into danger, and finally leading to her destiny at that stop light on the outskirts of Dublin.

If there is any consolation to be found in the tragic loss of Veronica Guerin, it is that because of her death, the public and the Irish Government finally woke up to the problems that Veronica had been writing about for some many years. Through a series of laws passed following her death, crime in Dublin dropped 15% and the flood of heroin into the city was disrupted in a severe enough manner that it has yet to fully recover.

The truth of the matter is, fact or fiction, this is an entertaining movie. Knowing that it is based on true events and a real person's life just makes it that much more poignant. 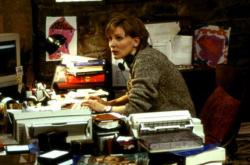 Where as Scott, and the movie, calls her "gutsy," I will call her stupid. She knocks on the door of a crime lord's home and once he answers it she confronts him about where he gets his money. He then proceeds to kick the crap out of her. Sure, this could be considered "gutsy", but I'll stick with stupid. What the hell kind of answer did she actually expect to get?

I am not about to attempt to take away from the good her death caused. However, is there not something wrong with writing that? Where the hell were the police? She could uncover all of this and nothing could be done until she died. The movie only hints at corruption in the justice system. The police are played as nice, yet impotent bystanders.

The film succeeds then, in showing Veronica's frustration. Where it fails is in Veronica's personal life. The movie suggests some problems in the marriage but never explores them. She was a married mother playing with the lives of her family. I believe they had some issues, but they are barely touched on here.

Like Scott, I continue to be impressed by Blanchett. She is one of those rare actresses who blend into their roles so completely. To often in a movie, you are watching a movie star act. With Blanchett, you never think of the acting. You just accept her as Veronica Guerin without question.