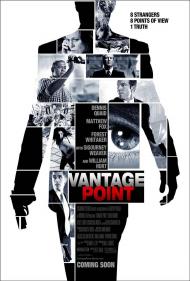 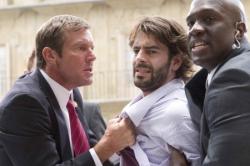 I often moan about Hollywood films and their lack of originality.  Vantage Point has a refreshingly original approach to story telling.  It takes a single 20 minute event and shows it from 8 different angles.   The ending does not exactly work, but up until the last few minutes, I was hooked.

The President of the United States is in Spain for a peace conference.  At an outdoor speech he gets shot and a couple of bombs go off.  We see the proceedings from many different vantage points, such as from a film crew, a secret service agent, a tourist, a Spanish policeman and a terrorist.

With each rewind of the events we learn more and more about what has happened.  Each rewind shows the event from a different angle, and as the movie goes on we find out that not everything we thought was true, is.  What seems clear at first is far more complicated.

Vantage Point makes some brilliant commentary along the way.  The first that we see of the assassination attempt is through the eyes of NEWS cameras.   Just before the event, a reporter is on camera talking of the Peace Conference, but then decides to add her opinion.  The director jumps all over her.

Director: "Angie, what the hell was that?"
Reporter: "Not everyone loves us, Rex."
Director: "Save the punditry for someone whose paid to have an opinion."
Reporter:  "I'm cool with censorship, I know the American people love that."

This brilliantly shows that even though reporter's jobs are to merely report the NEWS as it happened, they still have opinions that can compromise their view point.  It also shows how the NEWS outlets decide what they want to put out to the public.  The main stream media takes a beating here.  The final scene in Vantage Point is a news report on what happened.  I laughed out loud.

I was caught up in the mystery as it unfolded one angle at a time.  It eventually becomes a large conspiracy and a car chase.  Here is where the movie hits a plot hole.  The terrorists get chased for many, many blocks in a vehicle.  They are heading to a rendezvous point.  A little girl, who was at the speech, just happens to wander to the same place, in the same amount of time the vehicles race there.  These ruthless terrorists have just killed an unknown amount of people, but they swerve their vehicle to not hit a little girl?

After the assassination attempt, members of the U.S. government debate whether to strike back immediately or not.  One suggestion is to not respond as that is what they expect.  It shows the advantage of the terrorists  as such debates are not an issue for them, and the weakness of a government that worries as much about public perception as it does fighting a war.  As one terrorist says, "This war will never end."

Vantage Point is one of the best thrillers I have seen in a long time.  An all star cast adds to the excitement.  Dennis Quaid is one actor that is aging gracefully.  He was 54 when he made this and still has it.

What could have been a very redundant plot is kept interesting by director Pete Travis.  Every view point looks at the same event differently.   Although many of the actors appear in different accounts of the event, it is interesting to note how one perspective is hardly enough to learn the whole truth.   Media take note!