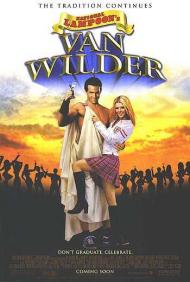 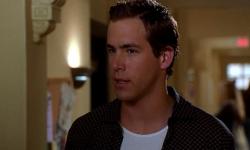 Every other year some movie comes out that has the same plot and or message: college is for partying. In 2002 that movie was Van Wilder. Like all of the college party movies before it, up to and including the grand daddy of them all Animal House, Van Wilder is simply about young people doing drugs, having sex, playing pranks and generally enjoying their youth.

Van Wilder is a partier with a heart. Having been at Coolidge College for 7 years, he has gained the reputation as the headmaster on campus of partying and goodwill. He even has a new assistant every year. This time it is an Indian virgin, (Kal Penn) who wants "...to study the great American art of muff diving."

Early in the movie, Wilder talks a freshman out of jumping off a building. Of course Wilder has no pants on and uses such lines as, "I think you've got the balls to make it here. Call me nuts, but I believe in you." His wealthy father, played by Animal House alumni Tim Matheson, discovers that his son is still in school and cuts him off financially. Wilder then goes about becoming a professional party planner for the school, earning enough money to pay his tuition.

Meanwhile, Tara Reid plays a college newspaper reporter, Gwen, who is trying to do a story on the popular Van Wilder. She is currently dating a frat boy, or should I say the Hollywood stereotype of a frat boy, Richard. He is clean cut, conservative and very stuck up. Gwen and Van Wilder, of course, fall for each other.

Played by Daniel Cosgrove, Richard is my favorite character in the movie. Whereas Van Wilder is really just a nice guy who doesn't want to grow up, Richard is a self-centered egomaniac who gets stuck with every possible bodily fluid joke. He has the grossest scene I have ever witnessed in a movie. It involves some croissants and dog semen.

Other than being in college for a long time, Van Wilder is actually harmless. He constantly spouts advice to friends such as, "Sometimes you gotta let your heart lead you...even if you know its someplace you know you're not supposed to be." And "Worrying is like a rocking chair. It gives you something to do, but it doesn't get you anywhere." He then always follows up the advice with, "Write that down."

Most college frat movies are about the students rebelling against the college Dean and or the prospect of growing up and being responsible. Van Wilder already is responsible and grown up, thus leaving little real friction between Van Wilder and anyone except Richard, who is most noted for his premature ejaculations.

Van Wilder has a few quick breast shots, some drugs use and several references to the size of his dogs testicles but it really seems modest considering it's subject matter.