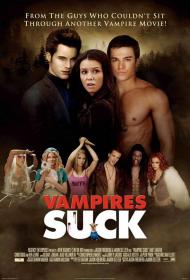 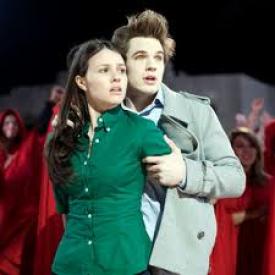 Jason Friedberg and Aaron Seltzer are back to spoof another movie.  The directing/writing team takes aim at the Twilight films.  If ever their was a franchise that deserved to be skewered it is those films.

Vampires Suck follows the plot of the first two Twilight movies.  It edits out most of the pointless slow parts.  Becca moves to a small North West town and starts a new school, where everyone makes fun of her on the first day.  She meets and falls for the mysterious Edward.  You know the rest.

Like all spoofs, it throws plenty of jokes at the audience.  Some work and some are a waste.  The funniest parts are when they make fun of the franchise directly.  When Becca first arrives at the school a Football player says that she looks frigid and boring so of course he thinks she is hot.  Later, Becca tells Edward that him being a hot sensitive guy that won't have sex is merely a prepubescent girls fantasy.  Another good scene is when Becca tells Edward she knows who he is.  I won't spoil it for you.

For every joke that works, there is one that does not.  A Dear John reference and a cameo by Alice In Wonderland are pointless.   Some jokes are just too obvious to be funny, such as Jacob's pack of muscular, tan boys in cut off jeans dancing to It's Raining Men, or Jacob taking his shirt off and stating, "My contract says I have to every ten minutes of screen time."

Whenever the movie makes fun of Becca or the ridiculous relationships, the film succeeds.  One genius moment is when two characters come out of a movie theater showing Twilight: Dawn, and they discuss some key plot points, spoiling things for anyone who does not know Edward and Bella will have a kid.

Vampires Sucks hints at some huge flaws in the series.  When Edward tries to talk Becca out of wanting to be a vampire, he ends up making it sound awesome.  It just does not take any of them far enough.  It could have had other cast members fall asleep every time Becca talks, enforcing just how dull Bella is.  As Scott and Patrick pointed out in their Eclipse reviews, it could have poked fun at a Edward/Jacob bromance.   Since neither one can keep their clothes on, it is ripe for some gay jokes.

Vampires Sucks is a better made film than Twilight.  It is much faster paced, and skips to most of the action scenes.   It makes fun of some of the stupid scenes, such as when Bella's father and the Indian play fight.  Outside of WWE, damn few middle aged men do that in real life.  I laughed when this movie had them really hurt each other.   The pale vampire makeup is better here than in Twilight.

I wish Jason Friedberg and Aaron Seltzer could have stayed on target, and given those movies the roasting they deserve. As it is, it seems like they held back and went easy on it.    This movie dwells on the longing looks and the ridiculous fans, but only touches on the laughable love triangle between a gay bait werewolf, a virgin vampire and a dull, naive mental case.  This is at best a 1.5 star movie, but because I hate the Twilight films so much, I will give it two. 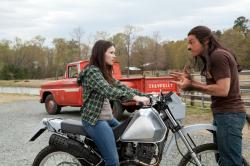 I just have to ask Eric, how drunk were you when you saw this movie?  Just because the Twilight movies are bad doesn't make this movie good.  There are the occasional chuckles, but mostly it's just groan inducing.

Jenn Proske does do a great impression of Kristen Stewart.  Her monotone delivery and slouching posture is a virtual replica of Stewart.  The only thing wrong with her impression is that she shows far too much range, emotion, talent and charisma.

Eric, you say that the joke about Jacob and his pack being gay is obvious, but exactly which joke here isn't obvious?  The hairy Jacob joke?  The Sullens lusting after Becca's blood?  Becca learning self-defense from her father?  There's nothing subtle or intelligent here.

The thing about the Twilight movies is that they're so bad and poorly written, it doesn't make much sense to spoof them.  They're spoofs already.  The Cullens are spoofs of real vampires and the love story between Bella and Edward is a spoof of a real love story.

Instead of calling this movie Vampire Sucks, they should have just called it Twilight Sucks since it only pokes fun at these movies rather than vampires in general.  There are a couple of very brief references to Buffy, True Blood and Vampire Diaries.  They couldn't come up with one Dracula joke?

I hate the Twilight movies too, but that doesn't help me like this one any more.