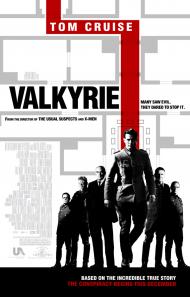 Tom Cruise as Colonel Claus von Stauffenberg, before he lost his eye.

Although there were more than a dozen attempts to kill and or over throw Adolf Hitler during his reign of terror, the one masterminded by Colonel Claus von Stauffenberg and other disillusioned officers and politicians came the closest and is the most well known.

Stauffenberg gets sent back to Germany to recuperate after getting wounded in Africa. His opinion of the war is known and he is soon recruited by a group of men trying to eliminate Hitler. The group is full of men of thought and ideas but Stauffenberg is a man of action and it soon becomes apparent that he will have to do the deed if it is to get done. The plot involves Stauffenberg carrying a bomb into a meeting, attended by Hitler, and the army arresting the SS officers and taking control of the government.

Although the movie has some intrigue, the real meat of the movie is the tension involved. They are risking their lives to end a war and save countless lives. Stauffenberg has the added stress of having a wife and children which he knows may very likely be imprisoned or killed if he fails.

Singer stages great emotional scenes. When Stauffenberg first meets his new, young, nervous Lt Herber, Stauffenberg bluntly says, “I am involved in high treason with all means available to me. Can I count you in?” The phone call in Goebbels office is likewise surprising, even though we know it is coming. Another great scene is when Stauffenberg and Herber go to Hitler’s private retreat to get him to sign a document that rescinded an earlier document of his. It was like watching someone approach a demon who at any moment could do absolutely any heinous act he willed.

Someone complained to me that Cruise does not do an accent. No one in the movie uses one so it is hardly an issue. In fact, Schweighöfer is German and his English is without an accent.

If the movie lacks anything, it is that there are so many characters involved that most of them are just one dimensional. It provides a more accurate depiction of the events but it leaves the audience feeling less involved. We see men plot and try to do good. We see them succeed and rejoice, only to discover that their victory was very short lived. Perhaps Singer should have focused more on a single relationship, such as Stauffenberg and his wife or Stauffenberg and his loyal Lt. Then it would have felt more involving and less like a documentary with well staged dramatic scenes. 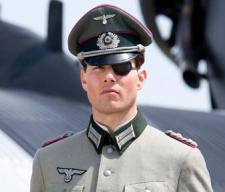 Tom Cruise as Colonel Claus von Stauffenberg, after he lost his eye.

For Hollywood, WWII is the war that keeps on giving. More than 63 years after it ended the second world war is still the setting for numerous movies every year. Valkyrie manages to find a new story to tell and not a fictionalized one either. Unless you are a history buff who likes reading about WWII, you have probably never heard of Colonel Claus von Stauffenberg or his assassination attempt on Hitler in the summer of 1944, shortly after the Allied invasion of Normandy.

I really enjoyed the old-fashioned style of this movie. It could have been made in the 1960’s. It is a thriller that doesn’t rely on special effects or over-the-top action. Eric is right that it seems a bit too much like a documentary but I think they were trying to be as true to history as possible. I also agree about the scene at Hitler’s mansion. Rarely is The Fuehrer actually portrayed in WWII movies, he is like Sauron, the ultimate evil that is never seen. The guy that played him here does a chilling job.

The acting is superb, but then with a cast that includes Kenneth Branagh, Bill Nighy, Tom Wilkinson, Terence Stamp and Eddie Izzard that’s hardly surprising. Tom Cruise easily holds his own, but then he has always been underrated as an actor. Will Smith has more charisma but Tom is a much better actor. Just compare this movie to Seven Pounds if you have any doubts about that.

I wasn’t particularly excited to see this movie but I’m glad I did. 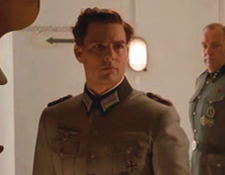 Tom Cruise as Colonel Claus von Stauffenberg, after he lost his eye, but with his glass eye in place, instead of his eye-patch.

Irish Political Philosopher Edmund Burke once said, "The only thing necessary for the triumph of evil is for good men to do nothing." and there's a great deal of truth to that. What this movie shows though is that even when good men do act, evil can still triumph, so I suppose timing has a lot to do with it as well.

What really struck me about this movie is how the fate of Germany and even the future of Western Civilization ultimately rested with two rather low level functionaries. Hitler and his staff are on one side and Colonel Stauffenberg and his group are on the other, but between them lie the communications staff and the major in charge of the reserve army. If the head of communications had chosen to side with Stauffenberg the coup might have succeeded. If the Major had decided to side with Stauffenberg and arrested Goebbels despite being ordered not to by Hitler, the coup might have succeeded. Or if some how Stauffenberg and his group had been able to put two men sympathetic to their cause in those positions how differently it might have all turned out.

I agree with both of you that the movie doesn't delve deep enough into the emotions of the characters. They are all rather flat and we learn very little about them. It makes it hard to connect to them in any real sense. Even Cruise as Stauffenberg reveals little about himself. It's easy to see now why those men might have wanted to kill Hitler, but were all of their motives so pure? Were some of them just anxious to make a power play of their own? The cast is terrific as you say Patrick, but at times it almost seems as if they wanted to showcase as many of the actors as possible so that none of them get enough screen time on their own. Like you Eric, I would rather they focused more exclusively on Stauffenberg. The most personal moments in the movie are when he worries about his wife and children and yet we never even see how they get away. We're told that they do, but never shown.

If this had been a strictly fictional Hollywood movie, the coup would have succeeded of course. The fact that you know it is doomed from the start but are still intrigued anyway shows how strong a story this is and how little, when it comes right down to it, endings and spoilers really matter.