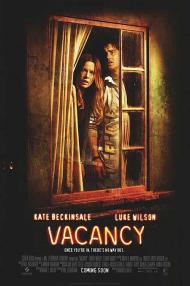 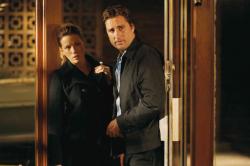 Vacancy has a small cast and very limited location shots, and even fewer sets. No doubt the fact that this movie could be made very cheaply was one of the reasons it was. There can be no other reason why anyone would have felt compelled to film this.

As the movie opens, David and Amy are driving down a deserted country road in the middle of the night. They are, of course, lost. They just came from a family gathering and David decided to take a shortcut to avoid an accident on the interstate. They talk very little, but each gets a few little digs in on the other and it soon becomes clear that they are not getting along.

They have car trouble and end up staying at a rat trap of a hotel. To be expected, Amy's cell phone cannot get a signal. After a few minutes of snapping at each other and complaining about the filthy room, David puts a video, left on the television, in. They soon realize that it is a snuff film that was filmed in the very room they are in. Within minutes someone is banging on the door, the lights go out and they are fighting and running for their lives.

Nothing really original happens here. The best that can be said about Vacancy is that the two leads are created as real people. Throughout the movie, little details of their relationship are exposed. They once had a son who has died and they are now on the verge of divorcing. Of course this is their therapy. Granted it is some extreme therapy.

As a thriller it moves along well enough, and has some tense moments, but it is not completely solid. At one point they are hiding in a garage from the killers. They could easily run out the door and down the dark street to escape. David mumbles some ridiculous reason for staying put.

I keep meeting more and more people who go less and less to the theater. They simply wait until the DVD comes out to see a movie. Some event films, like Spiderman 3, have to be seen on a large screen. With a B-movie like Vacancy, you're probably better off waiting to watch it on television. 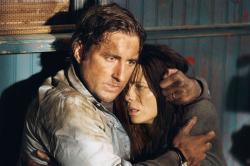 This is definitely a B-Movie, but despite some of the movie's problems I seemed to have enjoyed it more than Eric did. It is what it is, a small thriller with a simple plot that moves quickly and provides enough thrills to justify the cost of admittance. However, as Eric said, there isn't anything particularly special about seeing this one on the big screen. For a truly scary experience, wait until it's on HBO and watch it the next time you're staying in a motel.

My biggest problem with this movie is one that Eric didn't mention, and that is the ending, which is the tiniest bit ambiguous, which given that this movie is so short (under an hour and a half), is stupid. Thirty seconds more of screentime could have made for a clearer ending.

I do like that they developed the two leads into real people, but sometimes, in the middle of fighting for their lives, stopping to talk about their marital problems is a bit over the top. I would think that their personal problems would be the least of the worries at that point.

To me, movies like this are validation for living in a big city. People worry about crime in New York City, but at the very least, you're never very far from help. Being out in the country just means that no one can hear you scream.