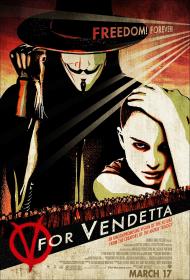 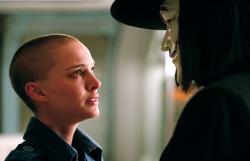 From the way V for Vendetta is being marketed you would assume that it is a non-stop action film. It's not. There are a few nice action sequences and some very sharp visuals, which is natural since this movie is written and produced by the Wachowski brothers; the minds behind The Matrix series. But it is politics that take the center stage in this movie and not the action.

The story is set in London in the near future. The United States is referred to as the former United States and is apparently torn apart by disease, war and civil strife. Britain has evolved into a totalitarian state that deals harshly with anyone who speaks out against the government or behaves in any way outside of the norm.

Natalie Portman stars as Evey, the orphan daughter of two political activists. One night while walking the streets of London after curfew she is assaulted by three government agents. She is rescued by a mysterious, and seemingly insane, masked and cloaked figure who calls himself simply, V. He takes her with him to the rooftops of London. There he conducts music as the Old Bailey (London's Criminal Courts building) explodes against the night sky accompanied by fireworks. The act he tells Evey is to commemorate Guy Fawkes, who was part of a conspiracy to blow up Parliament in 1605.

The following day V breaks into the British Television Network where Evey happens to work and broadcasts a message to Britain that is not only a tirade against the government but also a challenge to the British people to meet him in one year's time in front of Parliament where he will complete Guy Fawkes' mission. Evey, being seen in close proximity to V twice in less than 24 hours, is now also wanted by the police for questioning. V has no choice but to take her under his wing.

With such an interesting setup and an intriguing central character, V for Vendetta should be much better than it is. The problem is that after this explosive opening the movie becomes muddled with the mystery of who is V. Inspector Finch determines to find out and he begins unraveling the mystery by digging into the past. There are several flashbacks that border on Science Fiction and that aren't nearly as interesting as what is going on in the present. And I think the Wachowski brothers actually end up telling us too much about V. He's a much better character when we know little about him except that he's intelligent, a great fighter and quite probably insane.

Hugo Weaving (Agent Smith in The Matrix), has a terrific voice for the character of V. Whether he's spouting nonsense or quoting Shakespeare, it sounds fantastic coming from him.

Portman is good as Evey, but her character and the story are marred by an incident in the final third of the movie. I can't reveal what it is without giving part of the story away, but I can say it involves why she has her hair cut off and the things that happen immediately afterward. It's a rather stupid plot twist that is almost impossible to believe, especially given how her character reacts afterwards.

The ending, like the beginning, goes with a bang. While the action is happening, this movie works. It's only when the action stops and you have time to think, that the movie suffers. Fortunately though, even when the story is a bit dubious and heavy-handed with its politics, it is always gorgeous to look at.

The best thing about this movie is the character of V. He is a 21st Century cross between the Phantom of the Opera and Zorro. I agree with Scott though, that the less we know about him the better. The same for the story itself.

It starts very strong with an incredibly intriguing setup. And visually it is an impressive and beautiful movie to look at. Unfortunately the convoluted politics of the story gets in the way of the entertainment value. John Hurt is good as the chancellor but his character is pretty one dimensional in a comic book villain sort of way. This wouldn't matter so much if the movie didn't take itself sooo seriously. If they had gone for more straightforward action with these creative characters I would have enjoyed it more. Instead they try at times to be psychologically profound and it comes across a bit muddled.

Still this is definitely a movie worth seeing. It is original and visually amazing and V is one hell of a character. 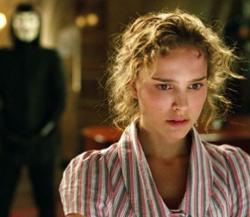 Hugo Weaving and Natalie Portman in V for Vendetta.

V for Vendetta is a liberal conspiracy theorist's wet dream. In it, an evil, conservative, religious leader takes a country down a path of deceit, corruption and loss of freedom. Homosexuality is shown as illegal. Curfews are imposed and the government eavesdrops on private conversations. I can just picture an audience of Liberals easily buying into and enjoying the conservative-as-evil, plot line.

The character of V is not that interesting, let alone unique. A man who wears a black cape, a mask, has a underground lair, fights at night and is wanted by the police is a bit to Batman-ish to be original. Has not Robin Hood, Zorro and countless other heroes done battle with the powers that be in the name of the oppressed masses? In fact, the only thing that distinguishes V from other renegade heroes is the film's politics, and they are far too one sided to be believed.

Liberals, desperate to undermine George Bush, have long bemoaned his conservative, religious ways as destructive to our way of life. Parallels to current politics can be drawn in countless ways to this movie. It does not add to the film. It merely makes it all seemed forced as if the whole point of the movie was to comment negatively on the Bush administration.