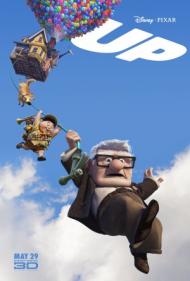 Having an old person and a kid become friends and thus help each other learn a lesson is an old Hollywood plot device. The best example, and best of the genre, being On Golden Pond. Disney/Pixar does the cliche justice with the very uplifting March/December friendship in Up.

Carl and Ellie met as children and immediately became friends, as each admired a famous explorer and the trips he took to a remote location in South America. They fell in love and were married. Carl promised Ellie they would go on a trip and have an adventure, but life, and death, got in the way. Now a widower, Carl finds his home threatened by a corporation wanting to buy his land and a system that wants him sent to a retirement home.

To finally keep the promise he made to his wife, he inflates thousands of balloons and flies his home to South America. A boy scout wannabe, Russell, accidentally stows along, and although the grumpy senior citizen is not happy about it, they soon bond. Both are lonely. Russell is the product of a broken home. They share an adventure that will benefit them both.

Like the best Disney movies, Up combines comedy and drama. You will laugh and be touched by this film. My favorite joke is when Carl and Russell are surrounded by growling dogs, and Carl says that it is time for Russell to earn his “run away in terror” badge. A scene near the end when Carl has a George Bailey moment, will warm the heart of anyone who has ever loved someone.

Although complimenting Pixar animation has long become passe, I have to note that I am still impressed by their work. The scene when the balloons first appear is amazing. A kaleidoscope of color rises from Carl’s house and fills the screen. Up until this moment the movie is fairly realistic, but once those balloons rise the movie becomes a fantasy almost as if Carl is having a dream, and not actually living it.

Up is about discovery and starting over. Like Dorothy in The Wizard of Oz, it is about finding that you do not need to take a trip, but simply look to your own back yard for your heart’s desire. Up takes some cues from some of the best Hollywood movies and incorporates them into a very beautiful story. Up is a movie for all ages, and for the ages.

Up isn't a kids movie with a few jokes thrown in for the adults like most animated movies. It's a movie for grown-ups with a few jokes thrown in for the kids. Carl's story, particularly during the brilliant opening sequence that shows he and Ellie's life together, can only truly be appreciated by someone who has lived and loved. This is part of Pixar's genius. Children can watch and enjoy more grown-up fare, but adults have a hard time enjoying movies that are aimed strictly at children.

It's interesting Eric that you say, "almost as if Carl is having a dream, and not actually living it.", because I had that same thought. I kept wondering if this was going to end like The Wizard of Oz with Carl waking up to discover it had all been a dream, but with still having learned something from it all. Perhaps the writers are saying that when you dare to live your dream then it will in fact feel like one.

Although this isn't a gut bustingly funny comedy (because it's not trying to be), it does still provide quite a few laughs. Dug the dopey dog provides quite a few chuckles. His squirrel joke was one of my favorite lines.

As you say Eric, Pixar's fantastic animation has been so consistent throughout all of their films that the only surprise would be if it wasn't good. The scene you mention with the balloons unfurling is a great one, but I also really like how they animated Carl. Most Pixar films feature characters that are other than human, but with Carl they've created a hero who is very human. He reminded me very much of Spencer Tracy. And Ed Asner does a terrific job of bringing him to life with his gravelly voice.

Up is a 4 star classic. But I do think that the adventure part of the story is weaker than the opening section. From the opening Movietone News segment, through Carl meeting Ellie and then their life together, the movie is perfect. The balloons unfurling in the sky and Carl and Russell’s budding relationship are likewise perfect. For me the only weak spot was once they arrive at Paradise Falls. I mean they see one wild animal the whole time, the giant colorful bird. And the talking dogs were almost too silly.

I did like that Carl’s childhood hero turned out to be the villain. Once Carl stops dreaming about adventure and begins living it he comes face to face with the fact that some of our most cherished childhood idols are actually false ones. Like Eric I got misty eyed when Carl finally looks at all of Ellie’s Adventure Book. It will stand as one of the great heartwarming moments in cinema. Yes Up owes much to both The Wizard of Oz and It’s a Wonderful Life as many other movies do. It is the rare movie indeed, however, that can be mentioned on nearly an equal level to those two most beloved of all family movies. Up is one such movie.