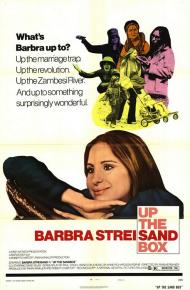 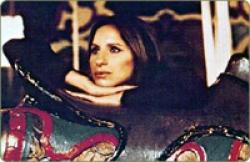 Of the seventeen movies Barbra Streisand has thus far starred in, only two have been flops at the box office. Up the Sandbox is one (the other is All Night Long). Not coincidentally these are the only two roles of her career where she successfully reigns in her superstar persona and plays a more subdued character.

It also didn't help that Sandbox followed on the heels of the hugely successful screwball comedy What's Up Doc?. Fans expecting another fast-paced over-the-top comedy were sorely disappointed by this feminist leaning movie about a New York City housewife who daydreams.

Streisand is Margaret Reynolds a rather ordinary woman with a successful husband whose career she puts first while taking on the traditional role of mother and housewife. Margaret has a rich fantasy life though. At various times she fantasizes about meeting Fidel Castro (who turns out to be a woman), blowing up the Statue of Liberty with a black militant group, and even going on a safari in Africa to discover a native tribe's secret to painless childbirth.

The problem with the movie is that the fantasy sequences are the only real plot. Sure Margaret finds out she is pregnant again (they have two children already) and debates whether or not to have the baby, but other than that the majority of the movie is spent in her fantasies.

As a comedy the movie only half works. It does have some funny moments, especially in the scenes with Margaret's mother. She tells Margaret she should move out of the city to New Jersey because, among other things, "Nobody writes Lesbians Unite in the elevator." In perhaps the funniest fantasy of the movie Margaret gets in a knock-down drag-out fight with her mother after pushing her face into an anniversary cake.

Up the Sandbox remains Barbra's most experimental movie. Her "art house" film if you will, it also marks the first movie produced by Streisand's Barwood Films. And while it's not a great movie it is a unique and interesting one. 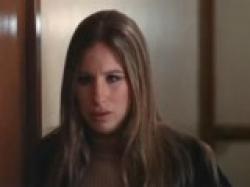 Margaret Reynolds is the most realistic character Barbra Streisand has ever played.  There are no diva moments, except when she tells off Castro in a dream.  Margaret is a real person.  As Patrick wrote, this makes for a unique role for Streisand, but also a dull one.

Margaret is depressed. She does not feel fulfilled being a stay at home mom.  She meets up with other mothers at a park where they all have a pity party for themselves.  They harangue one mother who shows up proudly talking about a newspaper article that her husband wrote.   These women then move their bitch fest to a drug store counter to have ice cream.

Near the end of the movie, Margaret's husband gets tired of her being unhappy and suggests that she take on more things after she says she feels unaccomplished.   She goes on a rant about all the child caring and housework she does all day as it is.  However, the only work she is ever shown doing is bathing the kids.  Their apartment is a mess.  Her mother comes over periodically with her maid in tow to clean up Margaret's apartment.  Her biggest duty seems to be taking the kids to the park, and she gets as much out of that as the kids do.

Her husband has a job in which he leaves early and comes home late.  Not only is he teaching at Columbia, but he is writing a book as well.  Never does Margaret consider his feelings.  Even when she contemplates an abortion, she never lets him know just how close she came to having one.  The one time she gives him the slightest amount of concern is when he discovers that, due to her lack of attentiveness, their daughter has colored over his manuscript pages, and Margaret retypes them.

Half of the film takes place in her head.  Those moments are a bit imaginative but only serve to demonstrate that she maintains her sanity by fantasizing about lives she will never have.   The scene where she dreams of joining a domestic terrorist group would never be made today.   In modern Hollywood films only white men are terrorists. (Source Code, 12 Rounds...etc)

The best scene in the entire film is when Margaret dreams of riding through the playground on a gurney.  The place is packed with children running and playing.  No scene could better represent the sheer definition of life than a bunch of children racing around aimlessly enjoying themselves.  It is Margaret's epiphany.  She decides that life, even when stressed, is still worth experiencing.

If I had cared more for Margaret, I would have been more moved by her decision.  As shown here, Margaret is selfish and moody.   I did not care if she had more children or not.  The one single problem Margaret is shown to have in the entire film that is not of her doing is when her baby sitter cancels at the last minute.   All other issues could easily be handle if she would just get a grip.   That makes her a frustrating character but also a very true to life person. 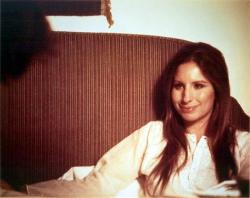 Barbra Streisand in Up the Sandbox.

This movie is a bit of a mess, but Streisand gives a decent dramatic performance. It's trying to make a statement about what it means to be a woman and a mother in the 20th century. It's just too bad that the way it makes this statement is so muddled.

The fantasy sequences only work some of the times. When Margaret is at the party and her husband is, if not flirting himself, then at least enjoying being flirted with, she imagines herself with larger breasts, but they deflate when he deflates her by dismissing her. The Castro, Statue of Liberty and Africa sequences however, do nothing but slow down the movie. They don't directly reflect Margaret's feelings other than that she's bored and unfulfilled. I was reminded of Allie McBeal and Scrubs, two television shows that 25 plus years after this movie was released used a similar plot device, but with much better effect. The trick to using fantasy sequences is to keep them short and pertinent.

I was able to summon more sympathy for Margaret than you were Eric. Clearly she does more work than you mention. She obviously does all the cooking (her husband can't even toast bread without burning it), presumably the dishes and she is shown doing the laundry. Her central predicament is that she loves her children, but she's having a crisis over whether or not being a stay-at-home mother is fulfilling enough for her. At the party she's embarrassed when someone asks her what she does and she replies that she's in the domestic arts. Her husband doesn't help matters by gushing over the big breasted woman after the party, telling Margaret how she has it all figured out.

Eric, no matter how much Margaret comes to grips with things she's still going to be in the same situation. She'll still have two children, with a third on the way. They obviously can't afford a nanny or daycare. What Margaret really lacks is the freedom to decide what to do with her life.

Although Barbra does do a good job in the lead, I think she brings some baggage to the part. Streisand is a much stronger person than Margaret and she never quite delivers the right level of weakness to the role. She seems more natural in the fantasy sequences where she gets to take charge than she does as the milquetoast housewife.

Although the DVD packaging and several movie sites list this movie as a comedy, it's really not. It's more what is sometimes called a dramady. There are some funny moments, but clearly it's meant to be taken seriously. Like you Patrick, I thought Margaret's mother provided some of the best laughs. Her complaints and fears about the city were worth a few chuckles. "I'll go for a walk. It's early, I don't suppose there will be too many snipers on the roofs yet."

There are some interesting shots of 1970s New York City. When Margaret is fantasizing about riding in the boat to the Statue of Liberty they pass the newly opened Twin Towers with the landfill created Battery Park City still under construction, so that here the Towers are still on the edge of the Hudson River.

I can admire Streisand's intention with this movie, but not the final product. There's just too many things wrong with it.