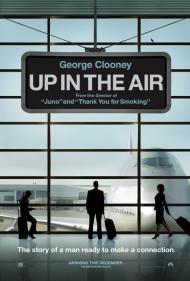 Is George Clooney talented or is he just so naturally charming that all he has to do is be himself on screen? It is certainly his charm that is front and center in Up in the Air, the latest film from writer/director Jason Reitman (Juno, Thank You For Smoking). Like its lead this is a movie that has a lot of charm even if you can see where it's going from the very start.

Clooney plays Ryan Bingham. It's his job to fly around the country and fire people for executives who are too scared to do it themselves. Ryan spends most of his life traveling. He's a member of every traveler's club that it is possible to be a member of. He's most at home in the air. The one goal in his life is to reach 10 Million Air Miles; a goal reached by just 6 other people. As a sideline he gives a "motivational" speech about freeing yourself of all possessions and relationships. The whole point being that he is a man alone with nothing or no one to tie him down. Having said that, you can probably guess which way the movie will go.

Ryan's way of life is threatened when Natalie (Kendrick) is hired by his company, because of her idea for firing people via teleconference instead of in person, thus eliminating the need for traveling anywhere. Ryan manages an extension when he persuades his boss that he should first take Natalie out on the road with him to show her the ropes. It turns out (of course) that they both end up learning things from the other, although I should note not in a romantic way.

Reitman writes a good script and his direction is quick and it keeps the movie fun, but the stars are the stars of the movie.

Clooney carries the movie with his typical wit and charm. Is it even possible to dislike George Clooney? Sure, you can disagree with his politics (Yes, I mean you Eric), but you have to admit that whatever "It" is, he's got plenty of it. He reminds me of an old time movie star. He doesn't have great range, but he's definitely got star quality.

The supporting cast is also quite good. Anna Kendrick does a great job as Natalie. This is the kind of role that pushes a young actress into prominence. And Vera Farmiga is equally good as the older woman that Ryan finds himself falling for. Reitman regular Jason Bateman also provides a few laughs as Ryan's boss.

Perhaps the only sour notes in the film are the scenes with people talking to camera about being fired. Some of them are real people and some are actors and it's not hard to tell which are which. Although reportedly the dialogue is based on actual incidents the scenes seem staged and stilted and should have been cut. Likewise the scenes with Ryan's family also fail to ring true.

Sure, the destination and ETA are pretty obvious when the movie takes off, but that doesn't mean you can't enjoy the flight, especially with such a talented and charming flight crew to escort you on the way.

I found this movie to be less charming than it is sad. It brought to mind the old adage, “Be careful what you wish for as it might just come true.” Clooney’s Ryan Bingham is at first content with his life of isolation. It’s not that he is a bad person but he selfishly doesn’t want to be committed to or to give of himself to others. He is so unwilling to make other people’s desires a priority in his life that he is reluctant to commit to taking a simple photograph for his sister that she wants for her upcoming wedding.

I disagree that the scenes with his family don’t ring true. On the contrary they show you just how isolated and emotionally selfish Ryan is. At one point he tells Natalie that he doesn’t know his sister that well. As if he is talking about a stranger. Later on he volunteers to walk his sister down the aisle since their father is dead. Of course he does this at the last minute, the night before the wedding, as a way of making himself feel better. When of course his sister has already made other plans.

I agree that the scenes of real people being fired should have been cut. Sure it’s topical but it’s so obvious that these aren’t actors that it takes you out of the movie. Especially since the acting is otherwise quite good.

SPOILER ALERT: The climax of the movie happens when Ryan falls for Vera and shows up at her house unexpectedly only to be confronted with the fact that she is married with children. Again Ryan was so wrapped up in himself that it never dawned on him that she had a life outside of their affair. The ending is ironic. Ryan gets to keep his isolated lifestyle “up in the air” only now, deep down inside, he no longer wants it. How sad.

Ryan tries to convince Bob that losing his job is a good thing.

Like Patrick, I enjoyed the irony. Ryan's job is to fire people, then his job becomes threatened. Once he decides he no longer wants to be alone, he is forced to be.

Yes Scott, Clooney is very much old school when it comes to his appeal as a movie star. Like Clark Gable, he is not an actor so much as a charmer. Both possess a natural confidence in front of the camera that makes them quite likable on screen. Both are also better in lighter roles than heavy dramas.

What I liked best about Up in the Air though, was the dialogue. Jason Reitman likes politically incorrect subjects. After Natalie calls Ryan a racist, he responds, "I'm like my mother, I stereotype. It's faster." Reitman wrote Thank you for Smoking and a short film called Consent where a couple about to have sex first negotiate through lawyers.

It is obvious that this was written by men. Reitman and Sheldon Turner wrote it, based on a novel by Walter Kirn. Only a guy would write these lines for women to say, "We all fall for the prick. Pricks are spontaneous, they're unpredictable and they're fun. And then we're surprised when they turn out to be pricks." and "Men get such hardons from putting their names on things. You guys don't grow up. It's like you need to pee on everything." Men often refer to male genitalia in generic terms when describing something, not so much women.

Reitman misstepped on the firing scenes. In one, J. K. Simmons asks Clooney what he thinks he should tell his kids now that he lost his $90,000 a year job. Clooney gives him a bullshit speech about how his kids will respect him even more, because now he can pursue his dream of being a chef. Their may be some truth to that, but how is he going to pay for culinary classes while trying to support a family on $250.00 a week unemployment? I like Reitman's work, but I think growing up in a wealthy Hollywood home gave him no insight into what it is like to live paycheck to paycheck.