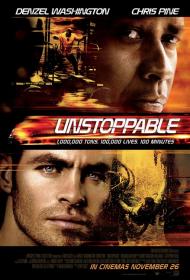 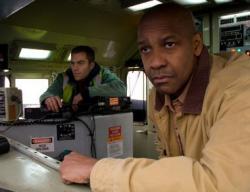 Unstoppable is a taut little thriller that wastes no time in jumping into the action, keeps up the pace and doesn't really stop until the final scene. In some ways it reminded me of one of those old disaster movies from the 1970s, the likes of The Poseidon Adventure or The Towering Inferno, only instead of a cruise ship or a skyscraper, the action takes place on a freight train.

Based loosely on a true story (or as the caption at the beginning says, "inspired by a true story"), the plot is quite simple. An idiot of a train engineer who's supposed to be moving a train inside the train yard, let's the train get away from him, under power, and it starts building speed on a main line in Pennsylvania, soon cruising out of control. Just to make matters more interesting, it's revealed that several cars on the train contain a flammable explosive.

Adding human interest to the story are Denzel Washington and Chris Pine. Pine plays Will, a new train conductor, while Washington is 28 year veteran, Frank. It's their first day working together and it doesn't start well as the two don't get along. When they learn of the runaway train, Frank comes up with a plan to stop it by connecting their engine to the rear of the runaway train and use their brakes to slow the train enough for someone to jump onboard and stop it. As the two risk their lives together they begin to develop a bond, but will they be able to stop this train in time and without loss of life?

Before watching, I seriously wondered if a train, stuck on a track on a known course, could generate enough excitement to sustain a full-length movie. I mean, a train's pretty big and it's easy to spot. As Rosario Dawson's train controller character says, "it's [like a] missile the size of the Chrysler building". To the filmmaker's credit though, they do generate excitement and they do it in a completely plausible manner. Not once does the story stretch into the realm of the impossible. It strays into the improbable occasionally, but it's easy to believe that this could all have really happened.

Washington, Pine and Dawson are all given just enough character to keep the movie grounded and give the story a human angle. Washington in particular manages to make the most of his part. Although we only learn a little bit about him, Washington the actor, brings a history with him that adds to Frank's character. Dawson is spunky and likable and Pine at least manages to deliver the goods in a decent if not spectacular manner. Lesser known Lew Temple plays Ned, a scene-stealing welder who helps try to save the day and provide some comic relief.

The "villain" of the piece, Glavin, is a bit of a stereotype, more concerned with saving the company money than saving people's lives, but it doesn't hurt the story. In fact, it rather adds to the old fashioned feel of it.

Makers of other movies should watch this one and take notes. It's a master class in how to pace and edit an action movie. It doesn't try to be anything but what it is, which is an entertaining thriller with likable characters that keep you invested in the story. 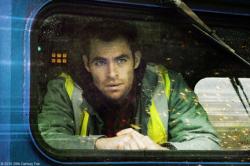 I was uninterested in seeing Unstoppable when it first came out.  A train can only go in two directions.  It either moves or stops.  How can a film without any surprises be an exciting thriller?  Then I read Scott's, and other good reviews, and decided to give it a watch.  It turned out that Unstoppable is one of the best action films I have seen in a long time.

In a time when action movies are filled with comic book superheroes and impervious secret agents, Unstoppable is a unique entry into the modern action movie genre.  It has all the fast pace and excitement of any of those other films, plus a sense of danger often missing in superhero movies.

As Scott pointed out, it has an old fashioned, early 1970's, feel to it, and that is the film's best asset.  Director Tony Scott and writer Mark Bomback keep this movie in reality.  Based loosely on a true story, the movie really succeeds because of the main characters.  Frank is divorced and will not win father of the year any time soon.  Will has insecurity issues in his marriage.  They are both real men with real problems.  Frank is being pushed out of his job while Will is having to prove himself.

When the train is to be stopped, the powers that be attempt to plant a man on top of the train via a helicopter.  The script makes a point to mention that the man doing it is a 22 year old Army veteran.  It is a Hollywood move that acts as a slam on many ridiculous stunts performed in most action films.

Frank and Will are just two average, decent men who rise to the challenge.  They are just two ordinary guys trying to pay their bills and keep peace in their families.  They have no super powers or government training.  They are just two guys who can get the job done.  "This is Will Colson, the conductor speaking; just to let you know we're gonna run this bitch down."  I could not help but root for these guys. 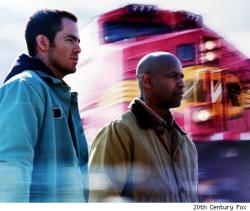 My brothers are right. Unstoppable is a great, fast-paced action movie with characters you want to root for. I’m not sure why this movie came and went so quickly in theaters. Perhaps many people were turned off by the simplicity of the story. At any rate I predict it will become a cult hit over time.

Eric you weren’t paying close attention. Frank is not divorced. He tells Will that his wife died from cancer four years earlier. And I’m not sure why you malign him as a father unless it’s because he forgot one of his daughters’ birthdays. To me they came across as a very close family. He is even able to joke about the fact that his daughters work as waitresses at Hooters. He’s not proud of it but he clearly respects them enough to accept it and the good natured ribbing it brings his way.

This movie perfectly balances the thrilling action (all of which is handled refreshingly realistically as both Eric and Scott mentioned) with the human relationships; especially the one between Frank and Will. They start off not exactly as enemies but both of them have their guards up. Will is tired of being treated as the “Rookie” and Frank is bitter about being forced into early retirement to make way for cheaper new blood.

Both guys are decent and friendly and quickly begin to respect each other for their bravery and abilities. By the end of the movie they have formed a true bond of friendship and have shared the most exciting event of each of their lives. A story they will both most assuredly be telling as long as they live.

Unstoppable is 90 minutes of pure adrenaline laced entertainment. Do yourself a favor and check it out soon.