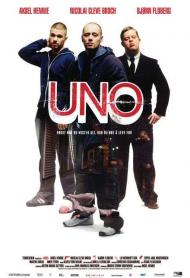 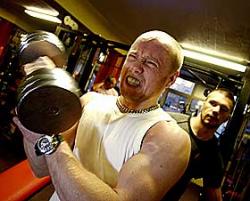 Aksell Hennie and Nicolai Cleve Broch work it out in UNO

Drawing from some personal experiences, Aksel Hennie wrote and co-directed UNO.  It is a violent coming of age story that earned him a best director Amanda award.  It is the second of three films he has made so far with friend Nicolai Cleve Broch.

David (Hennie) works at an Oslo gym.  He and Broch clearly worked out for the roles, as each have at least one shirtless scene to show of their efforts.   David lives with his parents and mentally challenged brother, Kjetill.  David's father is bed ridden and dieing of cancer.  While at the gym with his friend Morten (Broch) they witness the owner's son buying and selling steroids from some Pakistanis.

David's father makes a turn for the worse and ends up in the hospital.  David goes to the gym to inform his boss that he will need some time off, but it is also the moment the police decide to raid the gym and arrest him, Morten, the owner and his son.   They are all taken into custody and questioned individually.  It is David who eventually breaks as he wants to get back to the hospital.  This act gets him ostracized by everyone.  He loses his job, his friend and the Pakistani want their money still owed to them for some steroids.

David's father died while he was in jail and he must now help plan his father's funeral.  Meanwhile he gets his ass kicked allot.  Without having a job, he volunteers to sit with his special needs brother while his mom goes back to work.  They play the card game Uno often.  David explains to Kjetill that when you have one card left you say "Uno" and then you play that card and you are done, free.

Morten meanwhile gets into trouble with the Pakistanis as well when he has sex with the leader of the groups sister.  The Pakistani then put a serious beating on him that almost ends with a nail gun shot into his crotch.  He ends up hiding at Davids.

I first saw Broch in Buddy, in which he looked very much like your average bloke.  In Max Manus he had blonde hair and a naive little smile.  Here he is a buff roughneck with buzzed hair and gaudy jewelry.  His attitude is nothing like that in Buddy.  He is a very good actor, as I almost did not recognize him at first.

Hennie created an interesting story of a young man making a single decision that changes everything.  He was honest, and he paid a high price.  You feel empathy for David as at every turn the odds seem to go against him.  The ending when he walks out to take the beating of a lifetime is truly him playing his last card.

When we are young we put so much stock into our friends opinions that it blinds us from right and wrong.  At first David is pushed away from his friends and he feels lost.  Later, without his friends influence he begins to see priorities like never before.  He takes responsibility for his brother and most importantly himself.   David must shed his past like discarding a playing card.  Yeah, the symbolism is a bit unnecessary but it works none-the-less.